You have reached the cached page for https://zkm.de/en/about-the-zkm/entstehung-philosophie/architecture
Below is a snapshot of the Web page as it appeared on 4/13/2021 (the last time our crawler visited it). This is the version of the page that was used for ranking your search results. The page may have changed since we last cached it. To see what might have changed (without the highlights), go to the current page.
You searched for: zkm karlsruhe wikipedia encyclopedia britannica We have highlighted matching words that appear in the page below.
Bing is not responsible for the content of this page.
Architecture | ZKM
Skip to main content 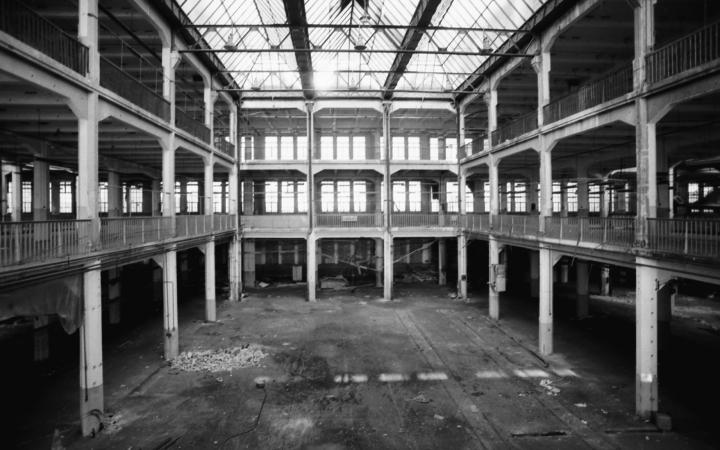 Since 1997, the ZKM has had its home in a former industrial building that is listed as a historical monument. At the time of its construction (1915–1918), »Hallenbau A«, as it was known, was one of the largest and most architecturally advanced industrial buildings in Germany. Philipp Jakob Manz (1861–1936) was commissioned as the architect. The landmarked production building of the arms factory is the last relict of a plant which used to have the size of a whole urban quarter. With regards to the urban development of Karlsruhe, its function was similar to the city‘s Baroque castle grounds.

History of the architecture

At the time of construction (1915–1918), »Hallenbau A«, as it was known, was one of the largest and most architecturally advanced industrial buildings in Germany. The client was the Deutsche Waffen- und Munitionsfabriken AG (DWM) [German Weapons and Munitions public limited company]. Philipp Jakob Manz (1861–1936) was commissioned as the architect. He ran one of the largest German architectural offices for industrial buildings in Stuttgart and Vienna in the early twentieth century. The listed production building of the armaments factory, in which up to 4,500 workers were employed, is the last relict of a plant that once extended the size of an urban district and which, although situated on the outskirts of the city, had a similar function to the urban landscape as the Baroque castle grounds of Karlsruhe.

The four-story building with enormous dimensions of 312 m in length, 54 m in width, and a total of 16,500 square meters of floor space was built as a precast concrete skeleton structure using the construction system of the French engineer François Hénnebique. The open-plan structure, which rests on a wide grid of pillars, is divided into ten atriums with the facade organized by large window surfaces. The plant was used as a munitions factory until the end of World War II, and was then in civil use by the Industriewerke Karlsruhe-Augsburg (IWKA). After the production site was abandoned in the 1970s, the factory premises were left as industrial wastelands. 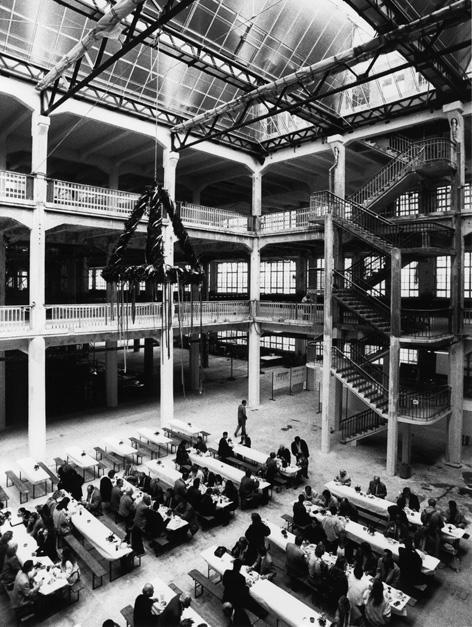 The decision to allocate a new use to the industrial building – which was threatened with demolition despite its listed status – first came twenty years later. After groups of artists had already pointed to a possible cultural use through their occupation of the building’s rooms between 1981 and 1989, the local council of Karlsruhe decided to rededicate Hallenbau A as the site of the newly founded ZKM | Center for Art and Media and the also newly founded Karlsruhe University of Art and Design (HfG) together with the Städtische Galerie Karlsruhe [Municipal Gallery Karlsruhe]. The Schweger + Partner architecture firm designed and realized the functionally and aesthetically demanding renovation. In 1993, the symbolic groundbreaking ceremony took place, in 1995 the roofing ceremony, and in 1997, the ZKM moved into Hallenbau A.

Architecture and GLOBALE
In the Hallenbau's 100th year, the ZKM allows the outstanding quality of the industrial architecture to take effect with special grandeur. At the start of the GLOBALE program, the exhibition rooms will not have aby museum fixtures such as white cubes or partitions. Instead, the open expanse of the pristine, precast concrete skeleton construction will be visible in its purity. 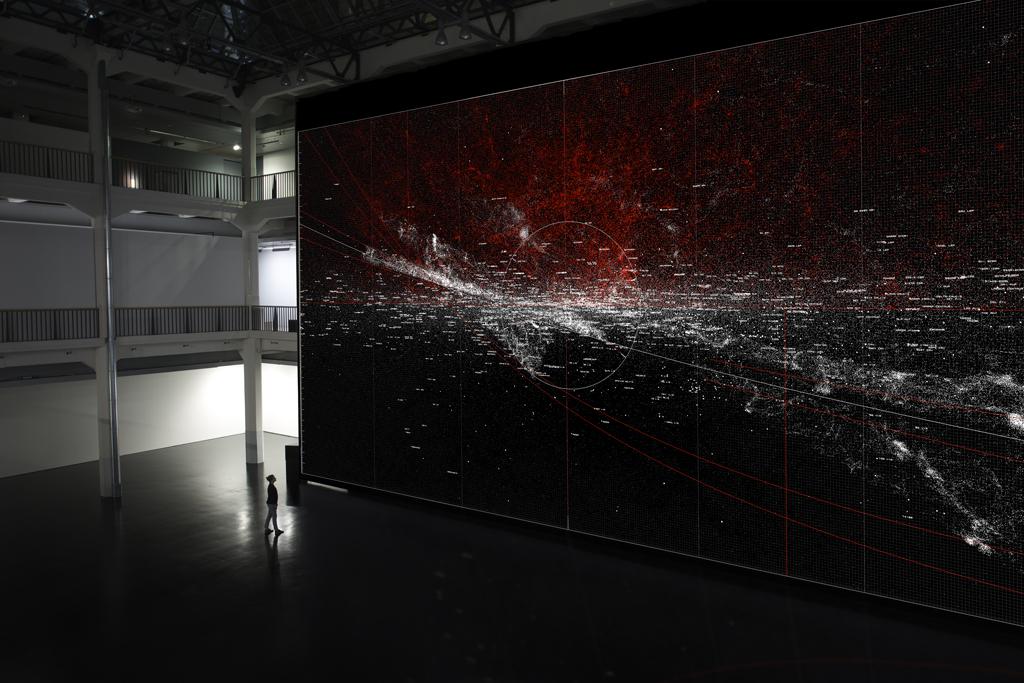 In the empty, completely darkened Atriums 1 and 2, the »micro | macro« exhibition showed three giant installations by Japanese artist Ryokij Ikeda from June 21 to August 9, 2015. Ikeda's audio-visual works are based on the digital data that surrounds us in the twenty-first century. They allow you to experience how the equation of »Machinery, Material, and Men«, which was established by the seminal architect Frank Lloyd Wright for the twentieth century, is updated with the equation of »Media, Data, and Men« in the twenty-first century; The industrial building becomes a data space. 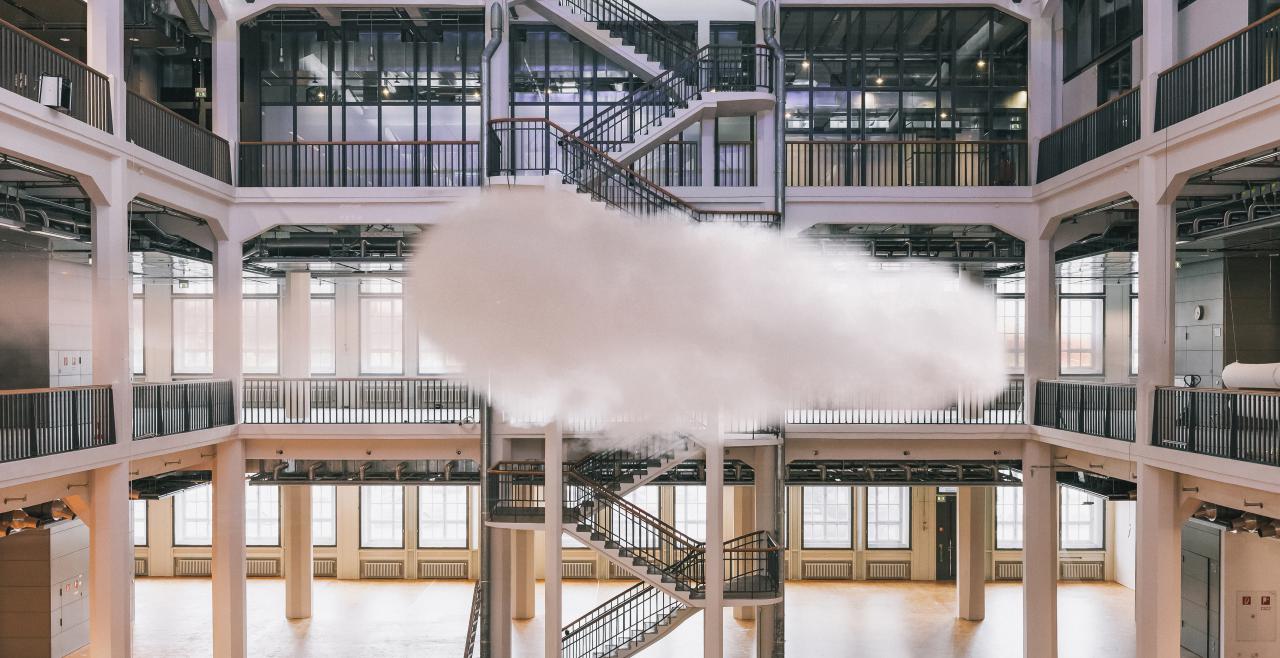 Atriums 8 and 9, whose window fronts have been exposed again for the first time in decades, are now flooded with daylight. The outer shell of the building seems to dissolve. The lightness of the architecture becomes apparent. Between June 20 and September 27, 2015, only one large cloud, which moved from atrium to atrium, floated about the empty rooms. The work, which is entitled »Cloudscapes« was developed especially for the dimensions of the Hallenbau by Transolar + Tetsuo Kondo.
Munitions factory and the GLOBALE
However, the ZKM also refers to the Hallenbau's history as weapons and munitions factory and the suffering of the forced laborers who had to work under inhumane conditions in munitions production during the Third Reich. A commemorative plaque at the ZKM's main entrance is a reminder of this deplorable time during World War II. Due to this history, the ZKM has a special responsibility and obligation to address the irrefutable value of basic and human rights.

For this reason, too, on June 19, 2015, the GLOBALE began at this site of contempt for mankind and of the production of weapons of mass destruction with a prologue: the »Tribunal«, a trial against the misconduct of the twentieth century and its crimes against humanity, animals and nature. This is also meant to commemorate the victims of the twentieth century's contempt for humanity in the ZKM building. Conscious of the history of the Hallenbau, the ZKM also acknowledges the artists who though their artistic work and campaigns have opened this historically-burdened building for culture: a site abandoned for two decades as an industrial ruin. Without them, the transformation from a place of dread in the twentieth century to a place of freedom and art, from a munitions factory to a factory of culture, could never have taken place. As a Center for Art and Media, the ZKM is also indebted to technology – but technology of futurology and individual freedom rather than a technology of destruction.

From the munitions factory to a »culture factory«