You have reached the cached page for https://mreiddisease.blogspot.com/
Below is a snapshot of the Web page as it appeared on 6/8/2020 (the last time our crawler visited it). This is the version of the page that was used for ranking your search results. The page may have changed since we last cached it. To see what might have changed (without the highlights), go to the current page.
You searched for: yellow fever wikipedia the free encyclopedia We have highlighted matching words that appear in the page below.
Bing is not responsible for the content of this page.
Yellow Fever

Important facts
-Caused by the bite of a female yellow fever mosquito
- Caused by a virus by favivirus
-cannot be passsed directly from one human being to another
-begins after an incubation period of 3-6 days
- Symptoms of yellow fever include
- This disease is very similar to influenza
Ways to prevent yellow fever
-The toxic pase is fatal in approximately 20% of cases, making the overall fatality rate for the disease 3%
-First outbreak in 1648
-Can cause sudden epidemics
-occurs in tropical areas
- last epidemic in new orleans in 1905
- from 9 months-59 years old should get vaccined before traveling
- Yellow Fever vaccine stem 17D

Case Study
Martia Reid
Mrs.Savido
Research 10
October 28, 2011
“All aboard the plane” Called the pilot. All of the people rapidly gathered on to the plane. Including 19 year old Daryl Massie who was a freshman at the University of Pittsburgh who was going to West Africa for a month to study the condition.. Daryl was very excited because he had never gone to another country before and he has always wanted to go to Africa because he wants to try and make an impact on other’s people’s life. He was also very glad that he got to travel with his school and some of his closes friends. Daryl sat next to his best friend Masean and talked about all the places they were going to visit and how they were going to help out.  Two days later the group finally landed in Africa. As soon everyone got off the plane the professor that is traveling with them asked everyone for their physical papers which shows that they are healthy and has all the correct vaccinations needed for the trip. “Awe man, I forgot m papers” said Daryl to his best friend Masean. “Awe, how did you forget bro? What if they try and send you back on a plane back to Pittsburgh?”  Said Masean. “Excuse me Professor Mike I forgot all of my paper work” said Daryl. Professor Mike looks around then looks at Daryl and tells him that he is a very healthy young man and he shouldn’t have anything to worry about. He also told him to make sure that he keeps this whole situation between the both of them. Deep inside Daryl knows that he didn’t have his papers the entire time because his mother really didn’t want him traveling to another country because she thinks that it is too dangerous. The group spends the night in the wilderness picking weeds and doing other activities. Daryl and Masean stuck together and went even further out then the group. They soon realized that they may have been lost. They spend almost 5 hours away from the group. Daryl soon noticed that he has some kind of rash on his arm. He couldn’t really see it because it was very dark out. He just knew that it itched very badly. “Bro I think something bit me on my arm” Daryl said to Masean. “I think we should start to hid back and find the rest of the group” said Masean.  The two start to walk. After 2 hours they find the rest of the group and Masean explains to professor mike they may have gotten a little lost. He tells them its okay just makes sure that you stay with the group next time. Days past and Daryl felt horrible he had a fever, headache, chills, loss of appetite, and he kept vomiting. He had no clue what was wrong with him. Then he soon explained to Masean what was going on.  Daryl was taken to the hospital the next day and explained to the doctor what happened the doctor told him he may have what is called Yellow Fever. “Yellow fever is a serious infection caused by the bite of an infected female mosquito” said the doctor. Then gave him a vaccine called stem 17D. He stayed in the hospital for several days and was soon recovered sooner then he thought. The group was so happy because they thought that his life was at serious risk. Weeks later he returned to Pittsburgh feeling perfectly fine.
Posted by Martia at 9:45 AM 3 comments: 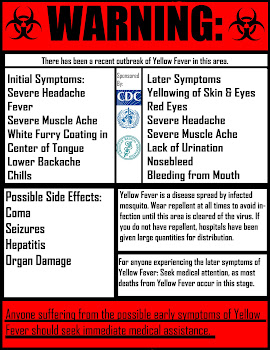 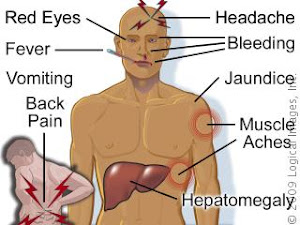 All of the symptoms of yellow fever

Most cases of yellow fever have been located more in the western hemisphere. 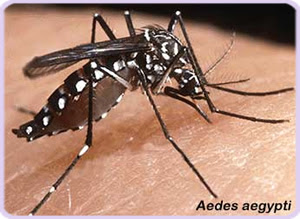 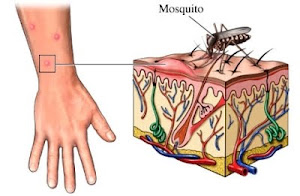 How the virus of yellow fever spreads 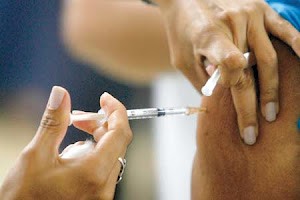