You have reached the cached page for https://streetfighter.fandom.com/wiki/Kikosho
Below is a snapshot of the Web page as it appeared on 10/26/2020 (the last time our crawler visited it). This is the version of the page that was used for ranking your search results. The page may have changed since we last cached it. To see what might have changed (without the highlights), go to the current page.
You searched for: www.eventhubs.com We have highlighted matching words that appear in the page below.
Bing is not responsible for the content of this page.
Kikosho - The Street Fighter Wiki - Street Fighter 4, Street Fighter 2, Street Fighter 3, and more
Start a Wiki

Chun-Li gathers intense ki energy in her palms, then releases a stationary concussive blast, capable of toppling even the strongest of opponents. It often appears as a large ki ball that stays on her palms that causes a small wind-tunnel effect, all while done from Chun-Li turning and swinging her palms at her target. However, later appearances make Chun-Li slam both palms at her target from a reared-back position, and it appears as a somewhat-smaller ki ball added with a horizontal rippling effect (that also follows the wind-tunnel effect) making up most of its range.

In the Vs. series, the attack completely envelops her in energy via a small ki ball radiating a dome of light, with the exception of Marvel vs. Capcom 3 as the area of the attack is smaller and the light in that game is also purple (while the ki ball is still blue but a bit bigger). However, after the attack in 3rd Strike and afterwards, she will be exhausted and will briefly slump.

Unfortunately for Chun-Li, most of the time, the opponent will be knocked away before they can suffer the full amount of damage this attack inflicts. One exception is when the opponent is cornered and cannot be knocked back any further.

However, later versions of the move (especially outside of the Alpha series) only knockback the foe on the last hit, making it so that the rest of the hits can connect. These versions along with the recent Ultra version are still useful in that there are many ways to combo into it (e.g. juggling a falling opponent with it; as mentioned with the EX series version), especially as its hitbox is so large, and due to the amount of hits.

However, the recovery time is large due to the exhausted slump afterward regarding the later versions of the attack, which makes this attack particularly easy to counterattack if blocked. In particular, the attack is very easy to beat out in Capcom vs. SNK.

In Ultra Street Fighter IV, Kikosho can be used after a EX Hyakuretsukyaku, EX Spinning Bird Kick, Tenshokyaku, Kikoken, Rear Spin Kick or any other move to launch the opponent into the air.

Kikosho can also be used to neutralize other projectiles, because this is the only projectile that can not be disintegrated by another (just by itself). As an anti-air, Kikosho is very efficient.

In Street Fighter V, Kikosho is able to be charged, with the fully charged variant being able to guard break and allow Chun-Li to perform a scaled combo. The initial activation is fast enough to work after Light normals while subsequent uses can only be comboed after Medium and Heavy normals. Kikosho's main use is to extend combos after Hyakuretsukyaku and Kikoken with either a Crouching Heavy Kick, an EX Hyakuretsukyaku, or her Critical Art. It can also be used to make her attacks safe at -2, or to surprise opponents with the fully charged version. Chun-Li takes a step back while charging, making it similar in usage to Tenrai.

Kikosho in Marvel vs. Capcom.

Preparing Kikosho in Marvel vs. Capcom 3

Chun-Li blasting away Ibuki with Kikosho.

Kikosho in Gem Fighter.
Add a photo to this gallery 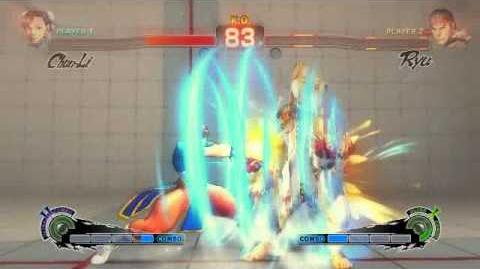 Retrieved from "https://streetfighter.fandom.com/wiki/Kikosho?oldid=224284"
Community content is available under CC-BY-SA unless otherwise noted.