You have reached the cached page for https://studentshare.org/family-consumer-science/1422455-pros-and-cons-of-genetically-modified-food
Below is a snapshot of the Web page as it appeared on 8/9/2021 (the last time our crawler visited it). This is the version of the page that was used for ranking your search results. The page may have changed since we last cached it. To see what might have changed (without the highlights), go to the current page.
You searched for: would you eat foods made from genetically modified crops pros and cons We have highlighted matching words that appear in the page below.
Bing is not responsible for the content of this page.
Pros and cons of genetically modified food Research Paper

Add to wishlist Delete from wishlist
Cite this document
Summary
Pros and cons of genetically modified food Essay Analysis The genetically modified foods have turn out to be very familiar in most of the countries. These foods mainly consist of the plants and animals whose genes have been changed and these foods were initially developed to augment the capacity of growing some crops with more yields so that it can be utilized in beating the world hunger…
Download full paper File format: .doc, available for editing
GRAB THE BEST PAPER92.2% of users find it useful 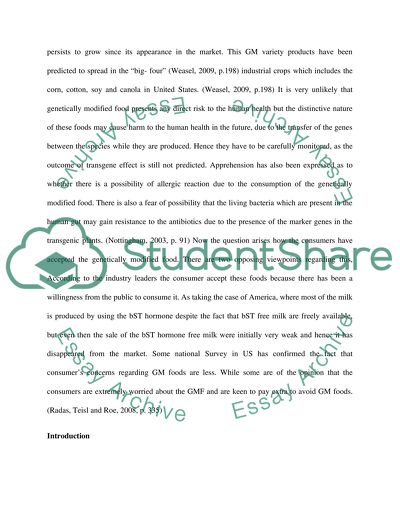 Extract of sample "Pros and cons of genetically modified food"

But what is vital is to know that whether the emergence of the genetically modified food comes as a blessing or a curse to the human kind. It’s a boon on one hand as it enables the farmers to grow crops in areas where standard crops cannot be grown, thereby feeding people as well as helping in generating income for the population in the developing nations. This also reduces the reliance on harmful and dangerous pesticides. But it has to be admitted as well that till date much has not been known about these foods and hence it is justifiable when some express their concerns about the effect of the food on the health of the animal and human.

Some are also concerned about the effect it has on the environment and the local economies and most importantly on the biodiversity. (Freedman, 2009, pp. 4-5) The ongoing debate on whether these foods will stay in the market or will become an extinct cannot be answered directly but the present scenario is marked with the escalation in the demand of these foods throughout the world economy. The Genetically modified food (GMF) has been readily adopted and accepted in the United States which still persists to grow since its appearance in the market.

This GM variety products have been predicted to spread in the “big- four” (Weasel, 2009, p.198) industrial crops which includes the corn, cotton, soy and canola in United States. (Weasel, 2009, p.198) It is very unlikely that genetically modified food presents any direct risk to the human health but the distinctive nature of these foods may cause harm to the human health in the future, due to the transfer of the genes between the species while they are produced. Hence they have to be carefully monitored, as the outcome of transgene effect is still not predicted.

Apprehension has also been expressed as to whether there is a possibility of allergic reaction due to the consumption of the genetically modified food. There is also a fear of possibility that the living bacteria which are present in the human gut may gain resistance to the antibiotics due to the presence of the marker genes in the transgenic plants. (Nottingham, 2003, p. 91) Now the question arises how the consumers have accepted the genetically modified food. There are two opposing viewpoints regarding this, According to the industry leaders the consumer accept these foods because there has been a willingness from the public to consume it.

As taking the case of America, where most of the milk is produced by using the bST hormone despite the fact that bST free milk are freely available, but even then the sale of the bST hormone free milk were initially very weak and hence it has disappeared from the market. Some national Survey in US has confirmed the fact that consumer’s concerns regarding GM foods are less. While some are of the opinion that the consumers are extremely worried about the GMF and are keen to pay extra to avoid GM foods.

(Radas, Teisl and Roe, 2008, p. 335) Introduction Genetically modified (GM) foods also known as the genetically engineered foods are produced by inserting genes into the DNAs of other species. There are several reasons for producing genetically modified foods like in some cases to prevent the incidence of allergies after they are being consumed while there are instances where they are being developed for the betterment of their

CHECK THESE SAMPLES OF Pros and cons of genetically modified food

Companies would gleefully produce tons of genetically modified food but who would take the responsibility of distributing it and educating the consumers about it?... Research thus far has found both pros and cons of consuming genetically modified foods.... The label of these foods is another very debatable topic; human beings need to be educated about these foods, it is also important to tell them about the pros and cons of consuming it.... hellip; genetically modified food is the result of fine genetic engineering, human beings have come a long way and some of the recent developments that have been made are truly startling....
2 Pages (500 words) Essay

Advantages and disadvantges of the genetically modified crops

What are the pros and cons of Genetically Modified Organisms

Are the GMO foods good or harmful to our health

We use cookies to create the best experience for you. Keep on browsing if you are OK with that, or find out how to manage cookies.
✕
Contact Us