You have reached the cached page for https://evilgenius.gamepedia.com/World_Domination
Below is a snapshot of the Web page as it appeared on 11/16/2020 (the last time our crawler visited it). This is the version of the page that was used for ranking your search results. The page may have changed since we last cached it. To see what might have changed (without the highlights), go to the current page.
You searched for: world domination 2 wiki We have highlighted matching words that appear in the page below.
Bing is not responsible for the content of this page.
World Domination | Evil Genius Wiki | Fandom
Gamepedia
Help
Sign In
Register 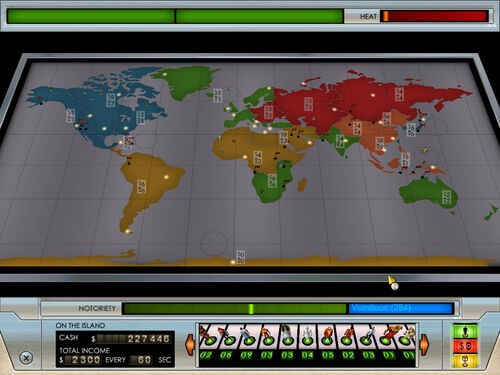 The World Domination screen is where minions and henchmen can be sent into the wider world to steal, plot, and commit Acts of Infamy. It becomes available to once the first control panel is built in the control room.

When units are on the world map, each group of minions in each region can be set to either stealing, plotting, or hiding. Any time they are not hiding, they can participate in Acts of Infamy.

When minions are stealing they will generate income every sixty seconds. The amount of money stolen from each region depends on the cash rating of the region and the combined stealing rate of the minions in that region.

Each delivery of stolen cash will be dropped of at one of the two depots. It will not be officially earned until a construction worker or valet picks it up and delivers it to a strongroom with a briefcase rack.

While stealing, minions and henchmen will generate heat in that region.

Plotting allows minions to uncover hidden Acts of Infamy in a region. Each mission has a required level of plotting that must be attained in that region before it is visible. Plotting even counts toward missions that require higher notoriety or more objectives to be completed; once the necessary requirements are met, the missions will be unlocked.

Plotting increments every five seconds. The amount of plot points generated in a region are determined by the number of control panels and control station, and the combined plotting rate of the minions in that region:

Like stealing, minions and henchmen will generate heat while plotting.

While in hiding, minions will generate zero heat but will not be able to steal or plot. They will also stop taking attrition damage from Forces of Justice or Super Agents' presence in their region.

After two minutes in hiding, minions will automatically return to their previous action.

Acts of Infamy can only be undertaken once all of the required minions are in the region. While missions are underway, minions will continue to either steal or plot at normal rates.

The stealing rate determines the amount of cash stolen every sixty-second cycle. The amount stolen depends on the region's cash rating.

Most minions and henchmen generate heat in their region while stealing or plotting. When in hiding, minions generate zero heat. Heat is shared between all regions in the same alliance.

Science minions and all henchmen will reduce the plot level required to uncover new Acts of Infamy in their region.

Science minions reduce the time required to complete Acts of Infamy by up to 50%. Due to a bug, certain henchmen increase mission time rather than decrease it.

Social minions reduce the heat gained on completing Acts of Infamy by up to 50%. Due to a bug, certain henchmen increase heat rather than decrease it.

Military minions and henchmen reduce the chance of other minions dying due to attrition and during Acts of Infamy by up to 50%.

Death chance determines the probability that a minion will die to attrition or perish checks during Acts of Infamy. When a henchman dies on the World Domination map, they will return to the island after five minutes and will not lose a life.

An A.N.V.I.L. Agent of Justice in Southeast Asia

The Forces of Justice will sometimes attempt to stymie evil schemes by deploying their agents on the map, represented by pieces of their own. While present in a region, minions will suffer periodic attrition if they are not in hiding.

Agent of Justice pieces will occasionally appear in regions generating high heat, depending on the region's justice rating. They will remain in the region for between 50 and 160 seconds, and will cause a perish check every 50 seconds.

Once notoriety is high enough to attract a Super Agent, they will spend all of their time not on the island in one of their alliance's four regions. When the Super Agent is defeated, they will stop appearing on the map.

Super Agents will spend between 60 and 180 seconds in a region before moving to another, and will cause a perish check every 100 seconds. Additionally, Super Agents are more likely to kill minions and make them more likely to die during Acts of Infamy.

Each of the Forces of Justice controls four regions. Heat is shared between all regions in each alliance.

Heat decays twice as fast in S.M.A.S.H. regions than others.

For each point of stealing rate, minions will earn money every sixty-second cycle depending on the cash rating of the region they are in:

The maximum amount that can be stolen every cycle is equal to one hundred times that region's income.

A region's justice rating determines the chance that an Agent of Justice will appear when the region's heat is high.

A region's secrecy rating determines the number of staffed control panels necessary to see the region's cash and justice rating and to perform Acts of Infamy in the region. If enough control panels aren't staffed, Agents of Justice and Super Agents will only be visible in regions that also have minions stationed in them.

Control panels count toward up to two points of secrecy, one for each slot staffed. Each control station gives two points, but only requires one minion to staff. Six fully staffed control panels or stations is sufficient to see every region.