You have reached the cached page for https://www.amazon.com/Friends-Like-These-Bill-Murray/dp/B00VX5SJOU
Below is a snapshot of the Web page as it appeared on 8/11/2021 (the last time our crawler visited it). This is the version of the page that was used for ranking your search results. The page may have changed since we last cached it. To see what might have changed (without the highlights), go to the current page.
You searched for: with friends like these.. movie 123 movies english We have highlighted matching words that appear in the page below.
Bing is not responsible for the content of this page.
Watch With Friends Like These | Prime Video 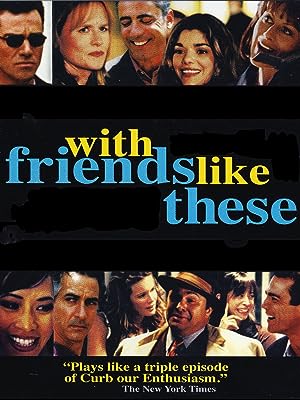 (54)5.91 h 45 min1998R
Four small-time, two-bit character actors, all close friends, are competing for the same part in the next Martin Scorsese mob film.

Rentals include 30 days to start watching this video and 48 hours to finish once started.
Add to
Watchlist
Redeem a gift card or promotion code
By ordering or viewing, you agree to our Terms. Sold by Amazon.com Services LLC.
Write review

SuzReviewed in the United States on January 2, 2017
4.0 out of 5 stars
Entertaining & engaging!
Verified purchase
Entertaining & definitely worth viewing. But I feel conflicted about this flick: FANTASTIC cast, enhanced by very engaging relationships among the characters. But there are weaknesses and inconsistencies in the storyline and script, which can't decide what it wants to be: is this a "morality play" about the responsibilities, intricacies and betrayals of "walking the tightrope" of friendship; or is this about the frustrations, intricacies, heartbreak and betrayals of "Hollywood Life"? The storyline bounces around, trying to be too many things instead of being focused. There are also stops-and-starts inconsistencies in how the scenes flow; i.e., one of the best scenes, with the biggest hook (the confrontation in Venice Beach with the "gumbas" from Buffalo NY) doesn't unfold until 1 hour into the film! Then it stalls and fizzles. I came away feeling frustrated because of the storyline's unfilled potential; BUT blown away by the GREAT cast and fantastic acting -- which shows the true talent of all these stellar actors who can take a flawed storyline, and, in spite of the flaws, manage to squeeze out the very best that the script has to offer! Now, that's talent! Proof positive is the closing scene where the competing actors / friends all audition before Martin Scorcese. Epic! Standing ovation! I recommend watching this film just to be awed by the "acting chops" on full panoramic display in the Scorcese final audition scene. Overall, the film's cast saves the day! (Even Garry Marshall makes a cameo appearance in the last scene!)
One person found this helpful
Report abuse

jenny tateReviewed in the United States on August 21, 2018
5.0 out of 5 stars
Two thumbs up!
Verified purchase
This movie about four friends who are all trying to make it in Hollywood is GREAT!
They are all up for a Scorsese film, and all want the same part. I found this ensemble had the perfect mix of drama, and comedy.
This film did a fantastic job of showing what real actors in Hollywood deal with day to day, and what they go through to get the part.
The Bill Murray cameo cameo as a producer was so funny! The other Cameos in the movie were great too! (I don't want to give anything away)
Overall this was a warm, funny movie about friends and family, and what life is all about.
I give it two thumbs way up!

NunnayrbznzReviewed in the United States on October 22, 2016
5.0 out of 5 stars
Fun
Verified purchase
A fun, accurate movie that does not star Bill Murray, but a nice cast effort with a lot of movie names. It was funny, sad, and interesting about the whole auditioning business in a town primarily filled with actors all trying for the same thing while their families watch/support, putting themselves second. A nice ensemble of good actors. The standout was David S. as Armand, though it was exactly what one would expect from him.
One person found this helpful
Report abuse

steven berkeReviewed in the United States on June 2, 2015
5.0 out of 5 stars
Comic Masterpiece
Verified purchase
"With Friends Like These" is a comic masterpiece! This story of desperate ambition and betrayal, set in Hollywood, revolves around a group of close friends, B-movie and TV actors, with a shot at the big time who prepare to and audition for the starring role in a Martin Scorcese film.
The humor is sharp, intelligent, insightful, adult and consistent throughout a superbly crafted script.. Messina's camera is as sympathetic and effective as the characters he created..
If there was an Academy Award category for Best Cameo, Bill Murray would have walked away with the Oscar.
The cast is first rate.
The closing scene song by Garland Jeffreys is a gem.

who
One person found this helpful
Report abuse

MichaelReviewed in the United States on September 10, 2020
5.0 out of 5 stars
Excellent Film!
Verified purchase
Very Entertaining film with great performance by some of the best character actors in the business. Bill Murray, Martin Scorsese and Garry Marshall have great, small parts as well and this is one of the best movies about acting and the entertainment business you'll ever see.
Report abuse

VirgilReviewed in the United States on December 2, 2015
3.0 out of 5 stars
Movie with a very limited audience
Verified purchase
It's a movie with (I believe) a imited audience; namely that of small time actors trying to make it in the big time. There were a few funny lines, and the overall portrayal of actors as "products" was accurate enough, but the story could have been told in a fraction of the time - it seemed very redundant and "run-on" to me.
Report abuse
See all reviews
Back to top
Get to Know Us
Make Money with Us
Amazon Payment Products
Let Us Help You
EnglishChoose a language for shopping. United StatesChoose a country/region for shopping.
© 1996-2021, Amazon.com, Inc. or its affiliates