You have reached the cached page for https://www.goalcast.com/2017/06/20/top-24-winston-churchill-quotes-to-inspire-you-to-never-surrender/
Below is a snapshot of the Web page as it appeared on 4/13/2021 (the last time our crawler visited it). This is the version of the page that was used for ranking your search results. The page may have changed since we last cached it. To see what might have changed (without the highlights), go to the current page.
You searched for: winston churchill quotes We have highlighted matching words that appear in the page below.
Bing is not responsible for the content of this page.
Famous and Inspirational Winston Churchill Quotes

Sir Winston Churchill is one of the most iconic leaders in world history. The British Prime Minister’s rousing oratory and steadfast leadership during the London Blitz held a besieged and frightened nation together, while his legendary tenacity and profound sense of conviction rallied the Allied countries to victory against Hitler’s Germany in 1945.

As a wartime Prime Minister at a pivotal moment for the world, Churchill’s passion and courage quite literally altered the course of history. Decades on, his legacy continues to spark admiration from across the political spectrum. In 2002, Winston Churchill was named the Greatest Briton of All Time in a poll conducted by the BBC.

Fortunately for us, Churchill was renowned as much for his wit and wisdom as for his brave and clear-sighted leadership. Upon his death in 1965, Churchill left a compendium of sayings that still inspire us to this day with their lucidity and life lessons. Here are the Most Famous Winston Churchill Quotes to Inspire You. Winston Churchill war quotes to inspire you to never surrender

These dynamic Winston Churchill war quotes prove his power in the twentieth century and beyond. Winston Churchill was no stranger to war and war strategies. But, he did prefer peaceful politics over war. He did not fear war but advocated for friendly ways to end conflicts. Here are some of the best Winston Churchill democracy quotes that spoke of his views on war.

There is always much to be said for not attempting more than you can do and for making a certainty of what you try. But this principle, like others in life and war, has its exceptions.

Never, never, never believe any war will be smooth and easy, or that anyone who embarks on the strange voyage can measure the tides and hurricanes he will encounter. The statesman who yields to war fever must realize that once the signal is given, he is no longer the master of policy but the slave of unforeseeable and uncontrollable events.

Never hold discussions with the monkey when the organ grinder is in the room.

One ought never to turn one’s back on a threatened danger and try to run away from it. If you do that, you will double the danger. But if you meet it promptly and without flinching, you will reduce the danger by half. Never run away from anything. Never!

In war, as in life, it is often necessary, when some cherished scheme has failed, to take up the best alternative open, and if so, it is folly not to work for it with all your might.

We shall not fail or falter. We shall not weaken or tire. Neither the sudden shock of battle nor the long-drawn trials of vigilance and exertion will wear us down. Give us the tools and we will finish the job.

Victory at all costs, victory in spite of all terror, victory however long and hard the hard may be; for without victory there is no survival.

The price of greatness is responsibility.

Never in the field of human conflict was so much owed by so many to so few.

If we are together nothing is impossible.

Winston Churchill history quotes that were ahead of time

Winston Churchill was an ardent follower of history and what it had to teach to humanity. He was a reader, a philosopher, and a great politician. These Winston Churchill history quotes speak a lot about this remarkable Prime Minister’s views and how they were ahead of the time.

History is written by the victors.

Every day you may make progress. Every step may be fruitful. Yet there will stretch out before you an ever-lengthening, ever-ascending, ever-improving path. You know you will never get to the end of the journey. But this, so far from discouraging, only adds to the joy and glory of the climb.

Politics is the ability to foretell what is going to happen tomorrow, next week, next month and next year. And to have the ability afterwards to explain why it didn’t happen.

The whole history of the world is summed up in the fact that, when nations are strong, they are not always just, and when they wish to be just, they are no longer strong. One always measures friendships by how they show up in bad weather.

History will be kind to me for I intend to write it.

It is better to be making the news than taking it; to be an actor rather than a critic.

Study history, study history. In history lie all the secrets of statecraft.

You must look at facts, because they look at you.

Winston Churchill funny quotes to have a laugh

Churchill’s wit and humor is no secret. He had such witty and striking responses that showed how his sense of humor was just amazing. Read these Winston Churchill funny quotes to have fun and learn a lesson at the same time. Not only that, these inspirational quotes Winston Churchill can also provide you some positivity.

I like pigs. Dogs look up to us. Cats look down on us. Pigs treat us as equals.

A lie gets halfway around the world before the truth has a chance to get its pants on.

In those days he was wiser than he is now; he used to frequently take my advice.

I am prepared to meet my Maker. Whether my Maker is prepared for the great ordeal of meeting me is another matter.

It has been said that democracy is the worst form of government except all the others that have been tried.

Golf is a game whose aim is to hit a very small ball into an even smaller hole, with weapons singularly ill-designed for the purpose.

Don’t talk to me about naval tradition. It’s nothing but rum, sodomy, and the lash.

To be really happy and really safe, one ought to have at least two or three hobbies, and they must all be real.

Churchill’s mother came from Brooklyn, New York, so was not all unfamiliar to America and Americans. He had some insight which often could be seen in his words. These Winston Churchill quotes about America are quite interesting. Some are funny while others are quite pleasing to the curious mind about what he thought of the superpower.

You can always count on Americans to do the right thing – after they’ve tried everything else.

The United States invariably does the right thing, after having exhausted every other alternative.

All the great things are simple, and many can be expressed in a single word: freedom, justice, honor, duty, mercy, hope. Everything is eminently practical and things are judged from a matter of fact standpoint.

The English never draw a line without blurring it.

You must look at facts, because they look at you.

Churchill did not support Socialism. As the Soviet Union’s Socialism rose, he became more wary of how it had started to affect the European countries. He had much to say about the topic. Here are some of the most popular Winston Churchill quotes about socialism which show how opposed he was to the ideologies brought up Socialism.

You were given the choice between war and dishonor. You chose dishonor and you will have war.

Socialism is the philosophy of failure, the creed of ignorance, and the gospel of envy.

Socialism is inseparably interwoven with totalitarianism and the object worship of the state.

Socialism is an attack on the right to breathe freely. No socialist system can be established without a political police.

Socialism would gather all power to the supreme party and party leaders, rising like stately pinnacles above their vast bureaucracies of civil servants no longer servants, no longer civil.

Dictators ride to and fro upon tigers which they dare not dismount. And the tigers are getting hungry.

Only a leader can give you the best advice on how to be an extraordinary leader. And, Winston Churchill was indeed one of the most outstanding political leaders the world had seen. This is why we have gathered the most motivational Winston Churchill quotes about leadership that can be a guidance in your journey towards being a leader.

To each there comes in their lifetime a special moment when they are figuratively tapped on the shoulder and offered the chance to do a very special thing, unique to them and fitted to their talents. What a tragedy if that moment finds them unprepared or unqualified for that which could have been their finest hour. Victory at all costs, victory in spite of all terror, victory however long and hard the hard may be; for without victory there is no survival.

Attitude is a little thing that makes a BIG difference.

The true guide of life is to do what is right. Things are not always right because they are hard, but if they are right one must not mind if they are also hard.

To improve is to change, so to be perfect is to have changed often.

You must put your head into the lion’s mouth if the performance is to be a success.

If you have an important point to make, don’t try to be subtle or clever. Use a pile driver. Hit the point once. Then come back and hit it again. Then hit it a third time-a tremendous whack.

Success is not final, failure is not fatal, it is the courage to continue that counts.

The problems of victory are more agreeable than those of defeat, but they are no less difficult. 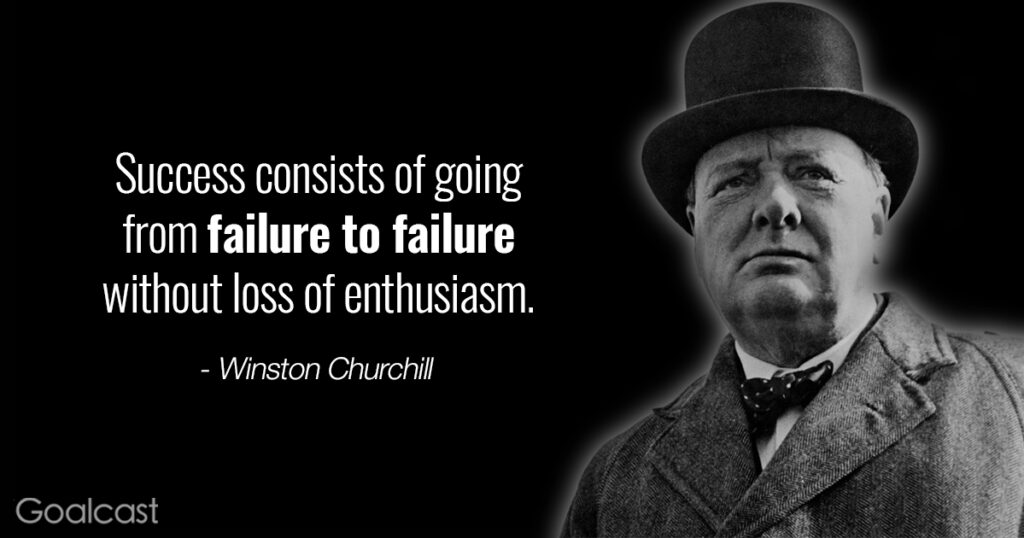 Success consists of going from failure to failure without loss of enthusiasm.

60 Inspirational Dance Quotes to Reignite Your Passion for Dancing

50 Dog Quotes for You and Your Furry Best Friend

75 Inspirational Quotes from John Wooden on Success, Leadership and Character

Woman Abruptly Dumped By Fiancé For Being Overweight Gets Ultimate Revenge

5 Parents Reveal The Biggest Mistakes They Made With Their Children

Why Khloe Kardashian’s Photo Scandal Has People Talking For The Wrong...

ABOUT US
Goalcast is an inspiring community for achievers dedicated to helping you improve all aspects of your life. We provide you with practical advice, resources and the motivation to help you realize your full potential.
FOLLOW US
© Goalcast Copyright © 2021