You have reached the cached page for https://wikimili.com/en/Will_Packer
Below is a snapshot of the Web page as it appeared on 2/18/2020 (the last time our crawler visited it). This is the version of the page that was used for ranking your search results. The page may have changed since we last cached it. To see what might have changed (without the highlights), go to the current page.
You searched for: william packer (producer) wikipedia video girl We have highlighted matching words that appear in the page below.
Bing is not responsible for the content of this page.
Will Packer - WikiMili, The Free Encyclopedia

Will Packer (born April 11, 1974) is an American film producer. He is the founder of Will Packer Productions [3] and Will Packer Media. [4]

Packer has been included in several high-profile lists, including The Hollywood Reporter's "40(ish) Most Powerful People in Comedy, [5] GIANT magazine's "The GIANT 100", Jet magazine's "Who's Hot To Watch in 2008" and Black Enterprise 's "Most Powerful Players Under 40." [6] As of 2018, Packer has produced or executive produced 28 films (including Girls Trip , Ride Along and Think Like a Man ) that have grossed worldwide over $1 billion combined at the box office. [7] [8]

It was at FAMU that he started filmmaking with colleague and future business partner Rob Hardy while participating in an internship with veteran producer Warrington Hudlin. [9] In 1994, Packer and Hardy produced their first film, Chocolate City, [10] for $20,000 and Packer helped broker a small distribution deal with Blockbuster video. [11] After graduating, Packer and Hardy moved to Atlanta, Georgia and co-founded Rainforest Films. Packer produced and oversaw the company's studio-financed and self-financed films and distribution projects. [12] [13] Packer and Hardy's vision was to make films that would appeal to black audiences who hadn't seen genre films starring people like themselves.

In 2000, Trois , Rainforest Film's first movie to be released theatrically, grossed over $1.2 million and became the fastest million-dollar grossing film independently distributed by African Americans. [12] [13] Trois was in the Top 50 Highest Grossing Independent Films of the year, according to Daily Variety , [14] and Rainforest Films was at #34 on the list of Top 100 Film Distributors of 2000 listed by The Hollywood Reporter in August 2001. Due to the success of their first film, Packer and Hardy were listed among the "New Establishment" of Black power brokers in Hollywood. [13] [15] [16]

In 2001, Packer helped broker a deal with Sony to produce and distribute urban films including Trois's sequel, Trois: The Escort , and Motives . [13] [17] The film Lockdown , released on home video under this Rainforest-Sony collaboration, was one of Columbia Tri-Star's top selling independent releases. In 2005, Rainforest Films released The Gospel . [16] At this time, Packer started using the shortened moniker "Will Packer".

Packer and Hardy wanted Rainforest's films to include established actors and actresses as well as those who are up and coming. 2007's This Christmas , a film about a middle-class family that reunites at Christmas time for the first time in many years, stars veteran actresses Loretta Devine and Regina King as well as R&B superstar Chris Brown in his feature film debut. [18] Packer produced five #1 films with Rainforest, Stomp the Yard , Obsessed , Takers , Think like a Man and Ride Along . His biggest hits with Rainforest have been Think like a Man, which grossed over $96 million worldwide after being released in April 2012, [19] and Ride Along, which brought in box office receipts totaling nearly $150 million as of April 2014. [20]

In June 2014, Packer and Hardy dissolved Rainforest Films. The pair were included in a lawsuit brought by former business partner Bernard Bronner in late June 2014. [22]

In 2013, Packer launched Will Packer Productions. In July 2013, he signed a two-year deal with Universal Television to develop new projects for the studio. [23] Later that year, he signed a three-year deal with Universal Pictures. [24] Packer-produced films under the Will Packer Productions banner include #1 box office openers Ride Along 2 , No Good Deed and Think Like a Man Too along with The Wedding Ringer and Girls Trip . Girls Trip was the highest grossing live action comedy of 2017 [25] and the first film written, directed, produced, and starring African-Americans to gross over $100 million. [26] The film went on to gross $140 million on a $19 million budget. Packer also served as executive producer on NWA biopic Straight Outta Compton and on 2016 television mini-series Roots.

In 2017, Packer launched Will Packer Media, a branded content and digital production company, in partnership with Discovery Communications and Universal Pictures. [28] As part of the launch, the company acquired digital ad firm Narrative_ [29] to serve as the new venture's branded content arm, WP Narrative. In 2018, Will Packer Media acquired women's lifestyle site xoNecole. [30]

Packer is a member of the Alpha Phi Alpha fraternity (inducted into the Beta Nu Chapter at FAMU). [40] [41] Packer married his first wife Nina Packer (general manager of Bryant Management and Dir. Of Operations for Blueprint Group, the artist management firm for Lil' Wayne and his YMCMB label from 2007-2014) in July 2001 and they have two daughters together, Nija Packer and Maya Packer. They were divorced in February 2009. [42] Packer proposed to his fiancé Heather Hayslett live on stage at the 2013 Essence Music Festival. [43] They were married on Friday, August 28, 2015 in Georgia. [44]

Gregory Berlanti is an American writer, producer, and film director. He is known for his work on the television series Dawson's Creek, Brothers & Sisters, Everwood, Political Animals, Riverdale, Chilling Adventures of Sabrina and You, in addition to his contributions to DC Comics on film and television, including The CW's Arrowverse.

Robert Hardy, Jr. is a film director, film producer, screenwriter, and television director. With partner Will Packer, he founded the production company Rainforest Films in 1994. Hardy's film credits include The Gospel, Trois, and Trois 2: Pandora's Box. His television credits include ER, Criminal Minds, Arrow, and The Game.

Gregory Ramon Anderson is a Tallahassee, Florida native who graduated from FAMU in 1994. He co-founded Rainforest Films, with fellow FAMU graduates Rob Hardy and Will Packer in 1994, working as a script writer, film producer, and fill-in actor. Rainforest Films has independently produced three feature films including Chocolate City, Trois, and Pandora's Box. Anderson wrote the screenplay for the film Stomp the Yard.

2016 in film is an overview of events, including the highest-grossing films, award ceremonies, festivals, and a list of films released and deaths.

Anthony Russo and Joseph Russo, collectively known as the Russo Brothers, are American film and television directors. The brothers direct most of their work together and occasionally work as producers, screenwriters, actors, and editors.

Open Road Films, LLC, formerly Global Road Entertainment from 2017 to 2018, is an American film production and distribution company based in Los Angeles, California. It was launched in March 2011 as a joint venture between the two largest American theatrical exhibitors, AMC Theatres and Regal Entertainment Group, who both owned the company until it was acquired by Tang Media Partners, a media company owned by Donald Tang, in August 2017. After Tang's purchase, Open Road and IM Global both rebranded as "Global Road Entertainment". In September 2018, Open Road declared Chapter 11 bankruptcy. The bankruptcy did not effect TMP, IM Global or IM Global TV. In November 2018, Open Road agreed to be purchased by Raven Capital Management. Raven completed its acquisition in February 2019.

Rainforest Films was a film production company founded in 1994 by Rob Hardy and Will Packer that produced films geared towards African-Americans.

2015 in film is an overview of events, including the highest-grossing films, award ceremonies, festivals, and a list of films released and notable deaths.

Blumhouse Productions is an American film and television production company, founded by Jason Blum. Blumhouse is known mainly for producing low-budget horror films, such as Paranormal Activity, The Purge, Get Out, Insidious, Split, Happy Death Day, Upgrade, Sinister, Halloween, and The Gift. Blumhouse has also produced dramatic fare films, such as Whiplash, and BlacKkKlansman, which have earned nominations for the Academy Award for Best Picture. The company also produced The Normal Heart, which won the 2014 Primetime Emmy Award for Outstanding Television Movie. Blumhouse has worked with directors such as Jordan Peele, Christopher Landon, James Wan, Mike Flanagan, James DeMonaco, Damien Chazelle and M. Night Shyamalan.

Will Packer Productions is an American film and television production company founded and operated by Will Packer. 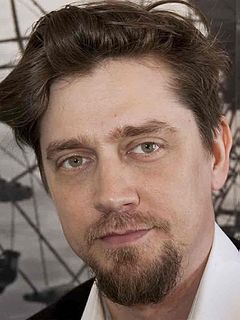 Andrés Muschietti is an Argentine filmmaker who achieved wide recognition with the 2013 film Mama which he made with Neil Cross and his sister, producer and screenwriter Barbara Muschietti, based on the three-minute film of the same name. This film, which he made at age 39, had attracted the attention of Guillermo del Toro, who then served as executive producer.

Chernin Entertainment is an American film and television production company founded and owned by former News Corporation president and chief operating officer Peter Chernin, also CEO and chairman of the company. Jenno Topping is the current Head of Film and Television, with David Ready serving as EVP of Film and Television. Kristen Campo is the EVP of television. 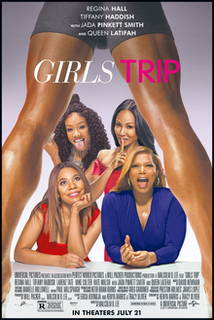 Girls Trip is a 2017 American comedy film starring Regina Hall, Queen Latifah, Tiffany Haddish, and Jada Pinkett Smith. The film is directed by Malcolm D. Lee and written by Kenya Barris and Tracy Oliver, from a story by the pair and Erica Rivinoja, who based the script off their own experiences with their female friends. It follows a group of four friends who go to New Orleans to attend the Essence Music Festival in order to reconnect.

Marsai Martin is an American actress and producer. She is known for her role as Diane Johnson in the ABC comedy series Black-ish. She starred in the 2019 Universal Pictures comedy film Little, for which she was also an executive producer.

Kenya Barris is an American television writer and producer. 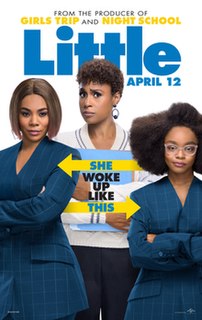 Little is a 2019 American fantasy comedy film directed and co-written by Tina Gordon. It stars Regina Hall, Issa Rae, and Marsai Martin, and follows an overbearing boss who is transformed into the child version of herself. Martin serves as an executive producer on the project, and at 14 years old is the youngest person to ever hold the title on a Hollywood production.