You have reached the cached page for https://www.dailymail.co.uk/tvshowbiz/article-10679341/Kelly-Ripa-goes-casual-tie-dye-shirt-husband-Mark-Consuelos-stroll-Manhattan.html
Below is a snapshot of the Web page as it appeared on 6/22/2022 (the last time our crawler visited it). This is the version of the page that was used for ranking your search results. The page may have changed since we last cached it. To see what might have changed (without the highlights), go to the current page.
You searched for: who is mark ridley thomas of los angeles california next 10 days forecast We have highlighted matching words that appear in the page below.
Bing is not responsible for the content of this page.
Kelly Ripa goes casual in a tie-dye shirt as she and husband Mark Consuelos stroll in Manhattan | Daily Mail Online

By Brian Marks and Sameer Suri and Adam S. Levy For Dailymail.com

She delighted her fans by dressing up as Lady Gaga and Jessica Chastain ahead of the Academy Awards.

But Kelly Ripa took a break from the Hollywood glamour on Friday, when she and her husband Mark Consuelos were spotted on a walk in New York City.

The 51-year-old Live! With Kelly And Ryan star looked relaxed in a vibrant tie-dye shirt as the couple strolled past the Greenwich Hotel in Manhattan. 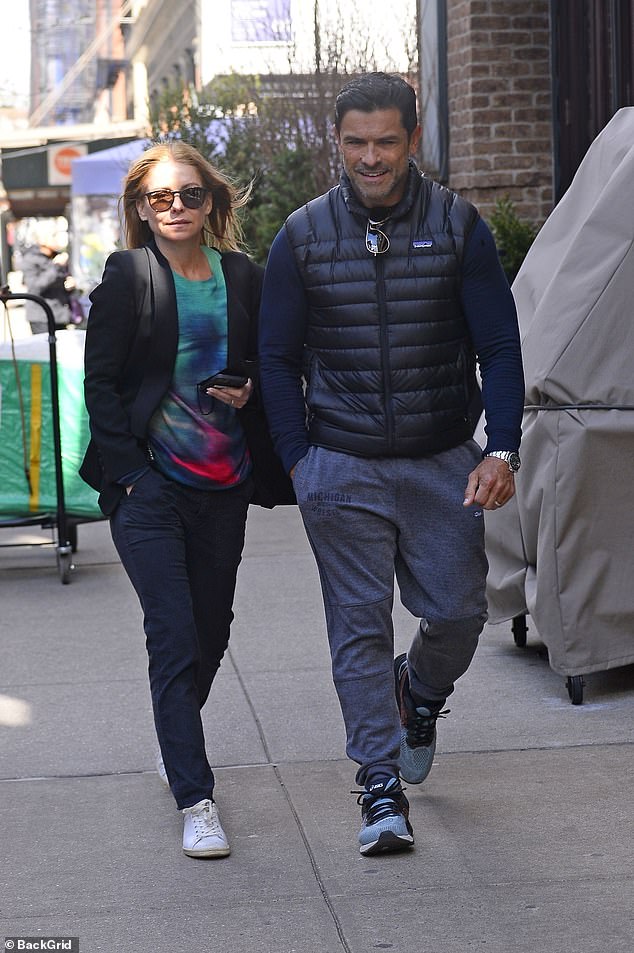 On the town: Kelly Ripa, 51, paired a casual tie-dye shirt with a sleek blazer and dark jeans as she took a walk near Manhattan's Greenwich hotel with husband Mark Consuelos, 51

Kelly paired her green, blue and red shirt with a classy black blazer, and stuck to dark colors with her slim jeans.

The talk show host and occasional actress rounded out her outfit with weathered white sneakers.

She wore her blond tresses parted down the middle and swept back to highlight her black sunglasses.

Mark, 51, looked rugged in a black down vest over a navy sweatshirt. 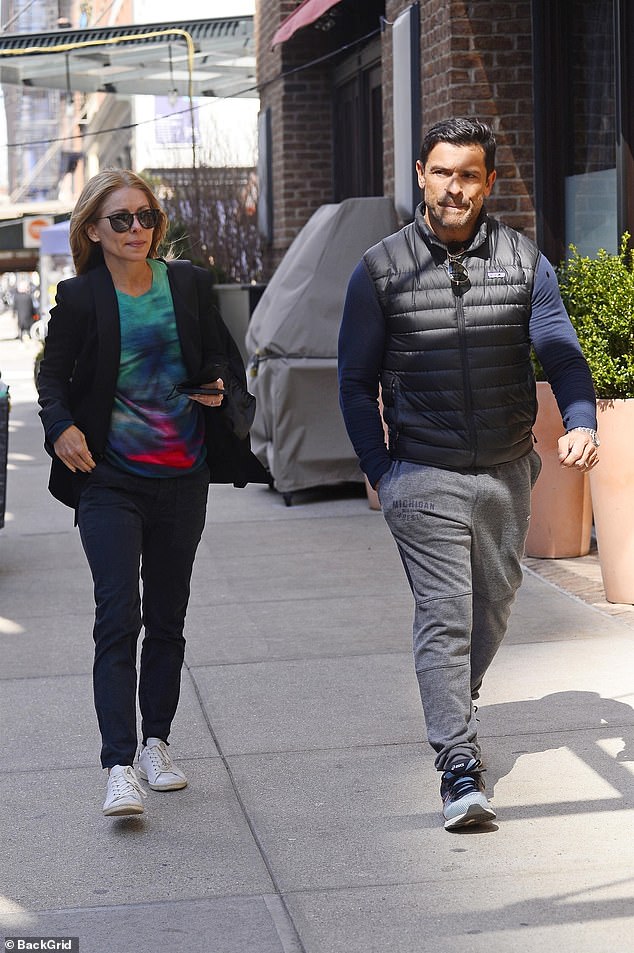 Staying fit: Mark looked rugged in a black down vest with a navy sweatshirt, gray sweatpants and gray Asics trainers, plus a silver luxury wristwatch

He also had on sporty black sweatpants with gray-and-blue Asics trainers, and he had his sleeve pulled up just enough to showcase his silver luxury wristwatch.

The two were taking it easy after Kelly seemed to have a blast impersonating some of the actresses nominated at last month's Academy Awards, including Jessica Chastain and Lady Gaga.

In one clip Kelly was unrecognizable as Tammy Faye, lampooning Jessica's big scene where she declares that her exaggerated stage look is 'who I am.'

Kelly could also be seen singing onstage as Tammy Faye, who used to perform songs as part of her ministry while her husband Jim Bakker did the preaching.

For her TV parody, Kelly was singing one of Tammy Faye's actual stage numbers, Jesus Keeps Takin' Me Higher And Higher. 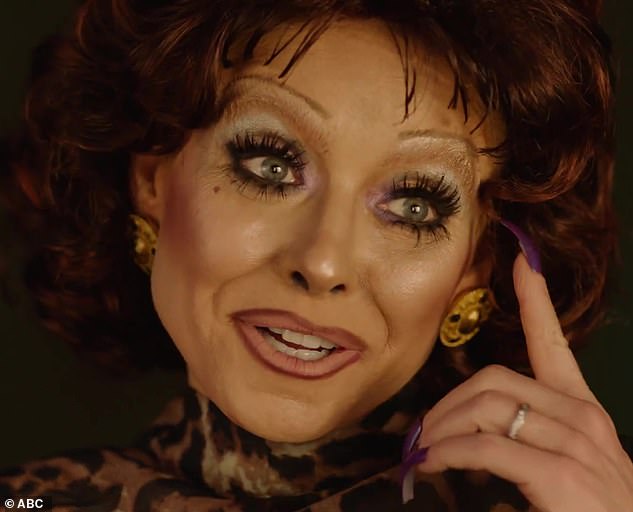 Goofing about: Kelly transformed into Jessica Chastain (playing Tammy Faye Bakker) in a clip last month ahead of her and Ryan Seacrest's post-Oscars broadcast 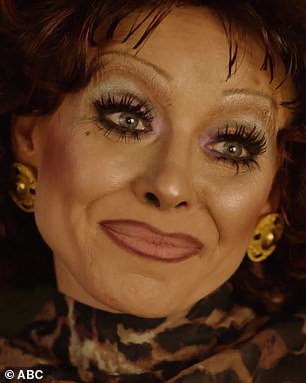 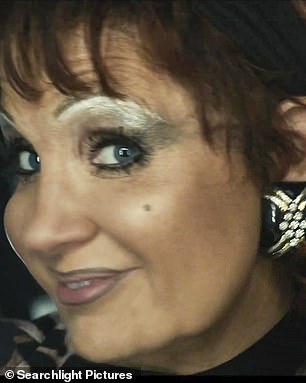 Uncanny: Kelly (left) was spoofing Jessica Chastain's Oscar-nominated performance as the late televangelist in the biopic The Eyes Of Tammy Faye (right)

The sequence is a send-up of a scene in The Eyes Of Tammy Faye where the 1980s superstar televangelist, as played by Jessica, explains her look.

In another clip, Kelly spoke in an Italian accent as she imitated Gaga's performance in House Of Gucci. 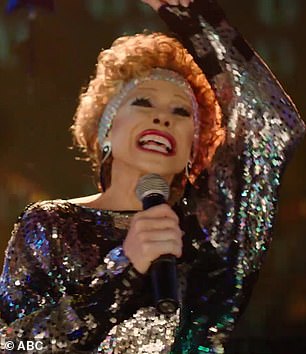 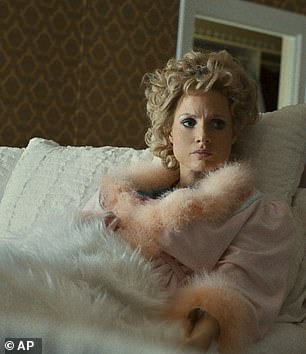 Making it happen: Kelly can also be seen singing onstage as Tammy Faye, who used to perform songs as part of her ministry while her husband Jim Bakker did the preaching 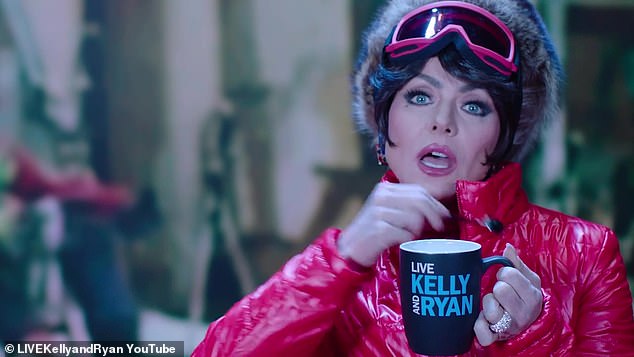 The latest: Kelly is seen depicting Lady Gaga's House of Gucci character Patrizia Reggiani in another teaser ad for her post-Oscar Live with Kelly and Ryan

'Do we have a demitasse? I have my spoon ... grazie, amore,' Ripa said, mimicking the dialogue from a ski trip sequence in the film in which Reggiani thought her then-husband Maurizio Gucci (Adam Driver) was cheating on her.

Kelly said, 'Father, son and House of Gucci,' a line that Gaga had improvised while shooting the film.

She added, 'I just say the words' in the clip, which was set to the Blondie classic Heart of Glass.

While Lady Gaga did not get an Oscar nomination for her outing in the Ridley Scott motion picture — the film's lone nod is in the category of Best Achievement in Makeup and Hairstyling — she appeared as a presenter with Liza Minnelli.

By posting your comment you agree to our house rules.

Your comment will be posted to MailOnline as usual.

Your comment will be posted to MailOnline as usual