You have reached the cached page for https://www.nhl.com/news/top-candidates-for-hockey-hall-of-fame-class-of-2020/c-317220646
Below is a snapshot of the Web page as it appeared on 1/20/2022 (the last time our crawler visited it). This is the version of the page that was used for ranking your search results. The page may have changed since we last cached it. To see what might have changed (without the highlights), go to the current page.
You searched for: who is boris mikhailov in the hockey hall of fame 2020 inductees shawn We have highlighted matching words that appear in the page below.
Bing is not responsible for the content of this page.
Top candidates for Hockey Hall of Fame Class of 2020 | NHL.com Skip to Main Content
News
Search

Top candidates for Hockey Hall of Fame Class of 2020 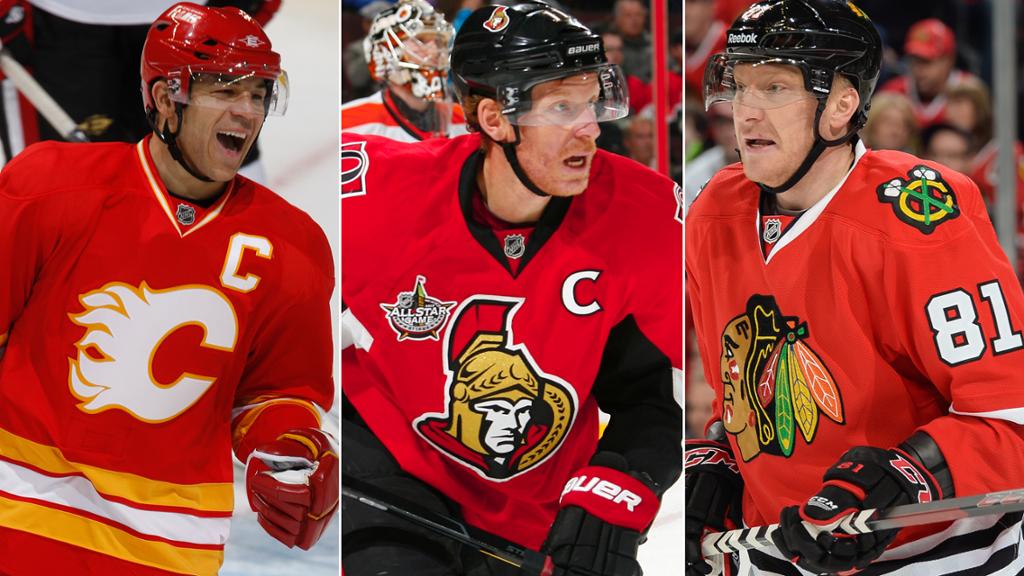 Here are 15 former players (listed in alphabetical order by last name) hoping to get the call from Hall of Fame chairman of the board and honored member Lanny McDonald.

Alfredsson scored 1,157 points (444 goals, 713 assists) in 1,246 games during an 18-season NHL career. A forward, he won a gold medal at the 2006 Torino Olympics and a silver medal at the 2014 Sochi Olympics with Sweden. Alfredsson also won the Calder Trophy as the best rookie in the NHL in 1995-96, but never won the Stanley Cup or another major award after that.

Brind'Amour won the Stanley Cup with the Carolina Hurricanes in 2006. Now Hurricanes coach, he finished his NHL career with 1,184 points (452 goals, 732 assists) in 1,484 games. Considered one of the best defensive forwards of his generation, he won the Selke Trophy in 2006 and 2007.

Hossa was a three-time Stanley Cup champion with the Chicago Blackhawks (2010, 2013, 2015) who also reached the Stanley Cup Final with the Penguins in 2008 and Detroit Red Wings in 2009. He is the only player to play in the Cup Final in three straight seasons with three teams. A forward whose NHL career was cut short because of a skin condition, Hossa scored 1,134 points (525 goals, 609 assists) in 1,309 games. He scored at least 30 goals in eight seasons and at least 40 goals three times.

Lowe has the backing of former Edmonton Oilers teammates and Hall of Famers Wayne Gretzky, Mark Messier, Glenn Anderson, Paul Coffey and Fuhr. The defenseman is a six-time Stanley Cup champion and played in seven NHL All-Star Games. He scored 431 points (84 goals, 347 assists) in 1,254 regular-season games and 58 points (10 goals, 48 assists) in 214 playoff games. He never won the Norris Trophy but was widely considered one of the best defenseman of his generation and a key member of the Oilers' 1980s dynasty.

Aleksander Yakushev's induction in 2018 could pave the way for Mikhailov, who is 75 years old and was the right wing on the Soviet national team's top line with Valeri Kharlamov and Vladimir Petrov. The captain of the Soviet national team from 1972-80, he won a gold medal at the 1972 Sapporo Olympics and 1976 Innsbruck Olympics and helped the Soviets win the IIHF World Championship eight times. Mikhailov was inducted in the IIHF Hall of Fame in 2000.

Turgeon scored the most points of any eligible player not in the Hall of Fame. The center scored 1,327 points (515 goals, 812 assists) in 1,294 games and 97 points (35 goals, 62 assists) in 109 playoff games. Turgeon never won the Stanley Cup and his only major individual award was the Lady Byng Trophy for skill/sportsmanship in 1992-93.