You have reached the cached page for https://www.amazon.com/Legend-Korra-Book-1/dp/B007QYRCX6
Below is a snapshot of the Web page as it appeared on 1/14/2022 (the last time our crawler visited it). This is the version of the page that was used for ranking your search results. The page may have changed since we last cached it. To see what might have changed (without the highlights), go to the current page.
You searched for: where can i watch the series online for kids free nickelodeon We have highlighted matching words that appear in the page below.
Bing is not responsible for the content of this page.
Watch The Legend of Korra Book 1 | Prime Video 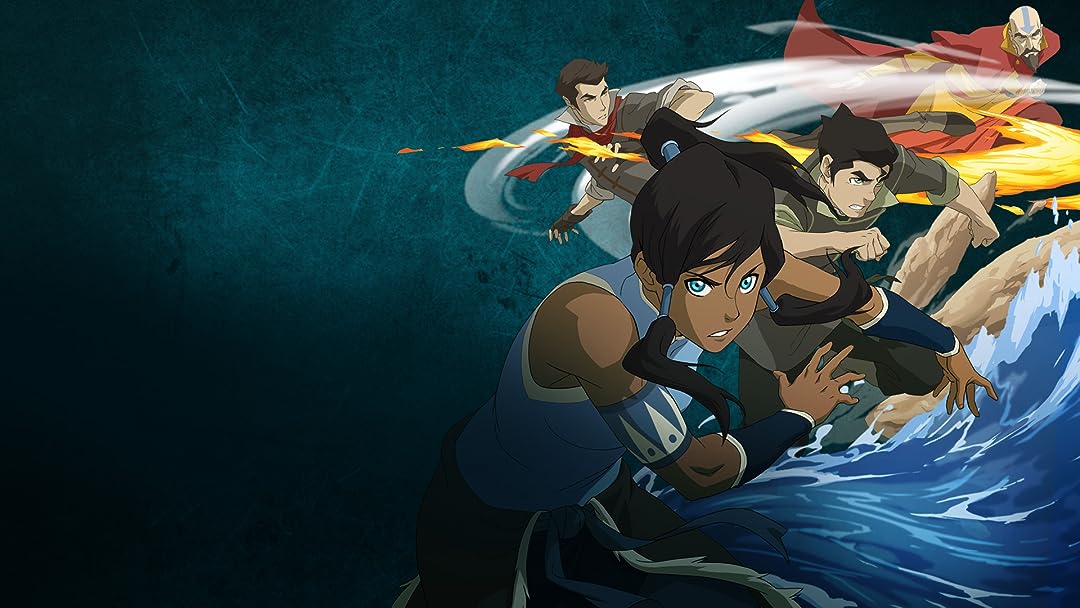 The Legend of Korra

(6,327)
8.42012X-RayTV-Y7-FV
Avatar Korra, a headstrong, rebellious, feisty young woman who continually challenges and breaks with tradition, is on her quest to become a fully realized Avatar. In this story, the Avatar struggles to find balance within herself.

Included with Paramount+ on Amazon for $9.99/month after trial

Watch with Paramount+
Start your 7-day free trial
Add to
Watchlist
By ordering or viewing, you agree to our Terms. Sold by Amazon.com Services LLC.
Write review

HawkeyeReviewed in the United States on July 28, 2017
5.0 out of 5 stars
Worthy successor for Atla?
Verified purchase
Now we all know how amazing avatar the last airbender is but does hold up to the original gang and their crazy adventures? Are you trying to buy this so you can see fun adventures like in the original? Well if you are you better stop because korra is entirely different from Aang. Korra isn't peaceful like Aang, wise like Roku, willing to bathe in the blood of her enemies like kyoshi(well kinda). She is a very brash aggressive avatar facing a new threat never seen in the original. She has her own team as well a funny guy, cool guy,and a awesome non bender. If your looking for avatar the last airbender you will be disappointed but if your willing to stay with it, this show has a lot of potential. Personally season 3 of korra is probably my favorite of all avatar so I reccomend you stay. Also, why are you here? There is a completely blu ray set that is way cheaper than the 4 seasons indivually so buy that instead!
45 people found this helpful

Arora MartinReviewed in the United States on January 11, 2020
2.0 out of 5 stars
Nope. Nope. Nope!
Verified purchase
Nope. If you liked the original Avatar series, dont bother with this one. Kids and I watched first 4 to 5 episodes, set it aside and never went back to it. That was a few years ago. From what I recall it was not very interesting, the humor was gone, and the story seemed forced and unrelatable.
I cannot recommend this to anyone.
6 people found this helpful

V. HerReviewed in the United States on April 14, 2015
5.0 out of 5 stars
Love it!
Verified purchase
As a 25 year old woman, I grew up on the original ATLA and it took me a while to come to terms with a new avatar. Once I moved past the nostalgia and opened myself up to LOK I was hooked immediately.

I've read other reviews comparing the two and for me it comes down to a few simple things:
This is a DIFFERENT avatar. Just how I can appreciate Aang for always trying to remain peaceful and balanced, I can also appreciate Korra for her hotheadedness. Fact is she is in a world that does not need an avatar and its refreshing to see her character develop throughout the series. (Honestly I would love to see a 3rd series with Avatar Kyoshi which would be a completely different story arch too!) Seriously though, how many times do we want to see the same regurgitated story line where a character has it completely together, knows their purpose and how to accomplish it? This makes the difference with LOK and why I enjoy watching it.

Next, the supporting characters that make up Team Avatar are not master benders. There shouldn't even be an argument here. ATLA Katara was a master after book 1 and Toph is just a bamf from the very beginning. For LOK we aren't dealing with that at all. So sure we can't expect kick ass bending but again, its for taking it for what it is. I feel like LOK makes up with that some seriously awesome fighting sequences.

BOTTOM LINE: I love ATLA, the comic series and LOK. Fans who love the original, who can appreciative 2 different characters with 2 different journeys will love this show as well. It still is it the best animated programming I have ever come across.

And seriously though, Naga is the star of the whole show, Naga literally saves​ everyone.
10 people found this helpful

S. BrooksReviewed in the United States on March 10, 2015
3.0 out of 5 stars
Good, but not as great as the original!
Verified purchase
This is very different from The Last Avatar animated series. And yet there are some similarities, or familiar points to it. Gone are the characters of old that we knew and loved. But They are there in flashbacks as much older, so look and sound different. This seems to be targeted at a slightly older audience. Korra is quite a bit older than any of the previous Avatar gang. There is now electricity, and the show has a slight steam punk vibe to it. The story is not as engaging as the older series, but still good. By this I mean that characters really changed and grew adn the story line was very much plat driven, but this new series is not so much plot driven, is pushed by more action, and so far (we are half way through the first season) not so much growing going on. Some of the character types are replicated as new characters, but what can you expect - they want you to feel comfortable watching it. It is way better than a lot of what is available and the play there is is a plot of sorts, which is more than you can say about any Disney tv show I have been forced to watch.
7 people found this helpful

CarlReviewed in the United States on June 20, 2017
5.0 out of 5 stars
A More Mature and Modern Avatar...
Verified purchase
This is a very worthy follow up to the original series and continues the legacy of the Avatar. This series is also more mature and explores some darker themes almost as if it expected its original audience to have also grown up since the days of Aang. The story revolves around benders vs. non-benders. As is typical of any fantasy where the population is divided among powered and non-powered individuals, conflict and tension start to rise. This while not being entirely novel is well enough executed. Korra herself initially isn't as likeable an Avatar as Aang but she slowly grows on you. The unnecessary and predictable love triangle did bog the show down at times but that can easily be ignored.

The animation is beautiful and a huge upgrade from the original and the fight scenes are the best in the series. I found episode 11 "Skeletons in the Closest" where the truth of Oman's identity is revealed to be as compelling an episode as any in the entire Avatar library right up there with "Zuko Alone". This series also expands on the original power sets with further exploration of new forms such metal and blood bending. There are also some great Easter eggs for fans of the original. Overall, I think this is a must watch for any Avatar fan and anyone who loves great animation in general.
7 people found this helpful

JuanReviewed in the United States on May 8, 2014
5.0 out of 5 stars
May not be the last Air bender, But is still Korra!
Verified purchase
Even though the feel and the composition of Legend of Korra didn’t have it like the Last air Bender it was still an amazing series with great animation, plot and character development.
Now, I know many people tent to bash on it since it didn’t have the constant opposition that Aang and the gang had, when having to face against almost the whole word. Yet the last Airbender was still a black and white, good and evil, yin and yang plot. You pretty much felt what it was right and what was wrong.
However, Korra (though her being the avatar was a breeze compare to Aang. With all the support from her allies and relatives) still faced one of the greatest challenge and emotional conflicts a hero faces; which is the gray zone...

The gray zone is were two or more parties shared the same conflicts but address it depending on their own definition of justice, or where good and evil can be view in different ways depending on individuals perspective.

This theme makes it so the main character questions her resolved, or doubt creeps in her mind whether what is the right way and who justified it or who dictates it.
Amon, being the main Antagonist with a mask, plays the part of being a leader who promised to deliver the abused, discriminated and bullied non-benders of the society to a free and equal city, which for many people is the answer they had been searching for.
The you have another character as Tarlok who with his own views of justice and being overzealous with his power, tends to abuse his power and gets a dark stamp on his back.

As a viewer of the show, you can see and even adapt the events to real life. in many episodes i felt Amon had the right idea or justification to what he was doing and having almost an entire city backing him up, gave you a sense of righteousness towards him. At the same time it conflicted to your own sense of right and wrong, as his action were extreme and a bit radical, yet it was what a normal revolutionary would’ve done in his case
In the meantime Korra being cooped up most of her life in the south, was hot-headed, naïve, optimistic and a little arrogant towards her skills, but at the shows goes own she develop more positive attributes making her into a well like character and respected Avatar.
I recommended anyone to see this series, is both for young and old with a good story and amzing characters that you can relate and have a good laugh at times.
3 people found this helpful

Kindle CustomerReviewed in the United States on April 6, 2020
1.0 out of 5 stars
CBS blocks 2 episodes from being watched in Book 1 so you will sign up for their subscription.
Verified purchase
The show is awesome, the 1 star is because of the situation.

Even though I bought the entire season I can't watch 2 episodes without signing up for CBS All Access. I bought it a year ago with no issues, these issues are new. I should have never stopped pirating.
2 people found this helpful
See all reviews
Back to top
Get to Know Us
Make Money with Us
Amazon Payment Products
Let Us Help You
EnglishChoose a language for shopping. United StatesChoose a country/region for shopping.
© 1996-2022, Amazon.com, Inc. or its affiliates