You have reached the cached page for https://www.dw.com/en/europa-league-role-reversal-leaves-eintracht-frankfurt-down-but-not-out/a-50132203
Below is a snapshot of the Web page as it appeared on 11/28/2020 (the last time our crawler visited it). This is the version of the page that was used for ranking your search results. The page may have changed since we last cached it. To see what might have changed (without the highlights), go to the current page.
You searched for: when did eintracht eintracht go down football We have highlighted matching words that appear in the page below.
Bing is not responsible for the content of this page.
Europa League: Role reversal leaves Eintracht Frankfurt down but not out | Sports| German football and major international sports news | DW | 22.08.2019

We use cookies to improve our service for you. You can find more information in our data protection declaration.

Europa League: Role reversal leaves Eintracht Frankfurt down but not out 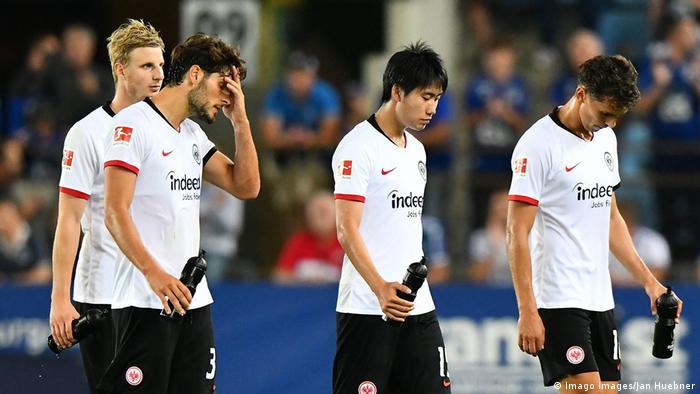 Rarely can a player hope they're as wrong as Kevin Trapp will on Friday morning.

"This match in Strasbourg will define the season," said the Eintracht Frankfurt keeper ahead of a 1-0 defeat in France that leaves the Eagles' hopes of making the Europa League group stages in serious jeopardy.

A scrappy first-half strike from Kevin Zohi settled the match in favor of the men from the Alsace, who went bankrupt and dropped to the fifth tier of French football in 2011 before winning an unlikely League Cup title in March after a series of giantkillings.

Adi Hütter's Bundesliga outfit struggled early on and though they got a measure of control in the second half, they looked worryingly toothless. If Trapp was right, this could be a long season.

The halftime removal of Ante Rebic, whose hat trick saved Frankfurt from an embarrassing German Cup exit earlier this month, meant that none of the club's three attacking stars from last season's run to the last four was on the pitch as they searched for an equalizer. Rebic and departed pair Luka Jovic and Sebastian Haller contributed 16 goals between them in Europe last term.

Rebic's substitution was not injury-related, with Hütter stating the Croatian's forward's performance "just will not do" while lamenting that his side "were not ready, we did not move at all up front". The Austrian coach later added that the second half was at least an improvement.

As well as the potency that was lacking in France, the presence of Frankfurt's numerous, raucous and colorful fans, whose choreos impressed onlookers across Europe, was a key factor in their remarkable run to the semifinals.

On Thursday, the home side, who came 11th in Ligue Un last term, stepped up with an impressive effort of their own on the terraces (see below) while also showing a few of the same qualities Frankfurt are renowned for on the pitch. This was a battling display marked with dashes of quality and a commitment that can sometimes overcome more accomplished sides.

Despite the disappointment, which Hütter and his men will need to overcome quickly with a trip to Leipzig coming up on Sunday, Frankfurt have been here before. A Joao Felix-inspired 4-2 loss to Benfica in Lisbon last season left them on the brink of quarterfinal exit before a stirring comeback at a rowdy Commerzbank Arena.

Though the deficit is less this time round, the lack of an away goal makes next Thursday's second leg a tough task – while Hütter's verdict on the performance of Rebic could become an issue for the club. They've proved capable of a comeback before, but if they are to prove their goalkeeper wrong, the Eagles may need a new goal-scoring hero to emerge.

Luka Jovic: The man to restore faith at Real Madrid

Luka Jovic enjoyed two defining years in a blossoming career with Eintracht Frankfurt. Having opted to take his talents to Spain, the Serbian now has the chance to be a defining figure in Real Madrid's rebuild. (04.06.2019)

Two uncapped forwards from midtable Bundesliga clubs have moved to the EPL for a combined fee of over €75 million. To German football watchers, the fees involved in sideways moves seem crazy, but is that the case? (23.07.2019)

They never ran out of gas, but Eintracht Frankfurt finally reached the end of the road in London on Thursday night. The German side came so close to the Europa League final, but finally fell to Chelsea on penalties. (10.05.2019)

News and background stories from football and the rest of the world of sports, from Germany's international broadcaster.

This is the place to come to find all of our Bundesliga and other football-related content on Facebook.

News and background stories from football and the rest of the world of sports, from Germany's international broadcaster.

Want to hear what we think about the latest Bundesliga matchday? Just ask your Alexa device to play the audio of our opinion piece.