You have reached the cached page for https://offtracktravel.ca/victoria-island-probably-vancouver-island/
Below is a snapshot of the Web page as it appeared on 1/16/2021 (the last time our crawler visited it). This is the version of the page that was used for ranking your search results. The page may have changed since we last cached it. To see what might have changed (without the highlights), go to the current page.
You searched for: what to do on victoria island We have highlighted matching words that appear in the page below.
Bing is not responsible for the content of this page.
Victoria Island? You Probably Mean Vancouver Island ; Skip to content

Victoria Island and Vancouver Island are commonly mistaken for each other but are actually quite different places. Located in the Arctic, Victoria Island is incredibly difficult to get to.

Wonderfully wild Vancouver Island, however, is just a hop, skip and a jump away from the mainland of British Columbia. If you love nature, it’s one of the best places you can possibly visit!

When I first learned about Vancouver Island, I knew I wanted to go. But I was a bit confused about the best way to get there and how big it really was. I also kept referring to it as Victoria Island.

There are affiliate links in this post. If you make a qualifying purchase through one of these links, I may receive a small commission at no extra cost to you.

Before I start, let’s just break down some of the name confusion surrounding Victoria Island and Vancouver Island. It will really help with your trip planning.

So to sum up, we have a large city (Vancouver, on BC’s mainland), a big island (Vancouver Island), a smaller city (Victoria, on Vancouver Island). Finally, there is a huge island nowhere near any of the others mentioned (Victoria Island).

Vancouver Island, along with the Lower Mainland area (Vancouver and around) has the mildest climate in Canada.

The western side of Vancouver Island is exposed to winds, rains and storms coming directly off the Pacific Ocean. Most communities and attractions are on the more protected eastern coast.

Spring and autumn are usually wonderfully mild, with sunny days (12-18c) mixed in with rainy ones. Vancouver Island is a great place to hike at low elevations in spring, despite the mud.

Vancouver Island summers can be hot, hot, hot. Some years, it is wall to wall sunshine in July and August, with temperatures rising to 28-30c. The overall average is a little lower, around 22-26c. Snow is still often still present in the mountains until July.

Winters on Vancouver Island are incredibly mild. Snow falls at sea level maybe once or twice a season. The tradeoff, however, is plenty of rain. Victoria escapes the worst of the weather. If you want snow, simply head up into the mountains.

Aside from the Victoria Island confusion, there are a few other misconceptions about Vancouver Island. One is the size.

This island is big, as demonstrated by the six-hour drive needed to drive from bottom to top. Consider this a quick guide to the highlights of Vancouver Island, from south to north.

Tofino and Ucluelet – Small communities on the wild, west coast where the rainforest meets the ocean. Sandy beaches, storm watching, surfing and more. 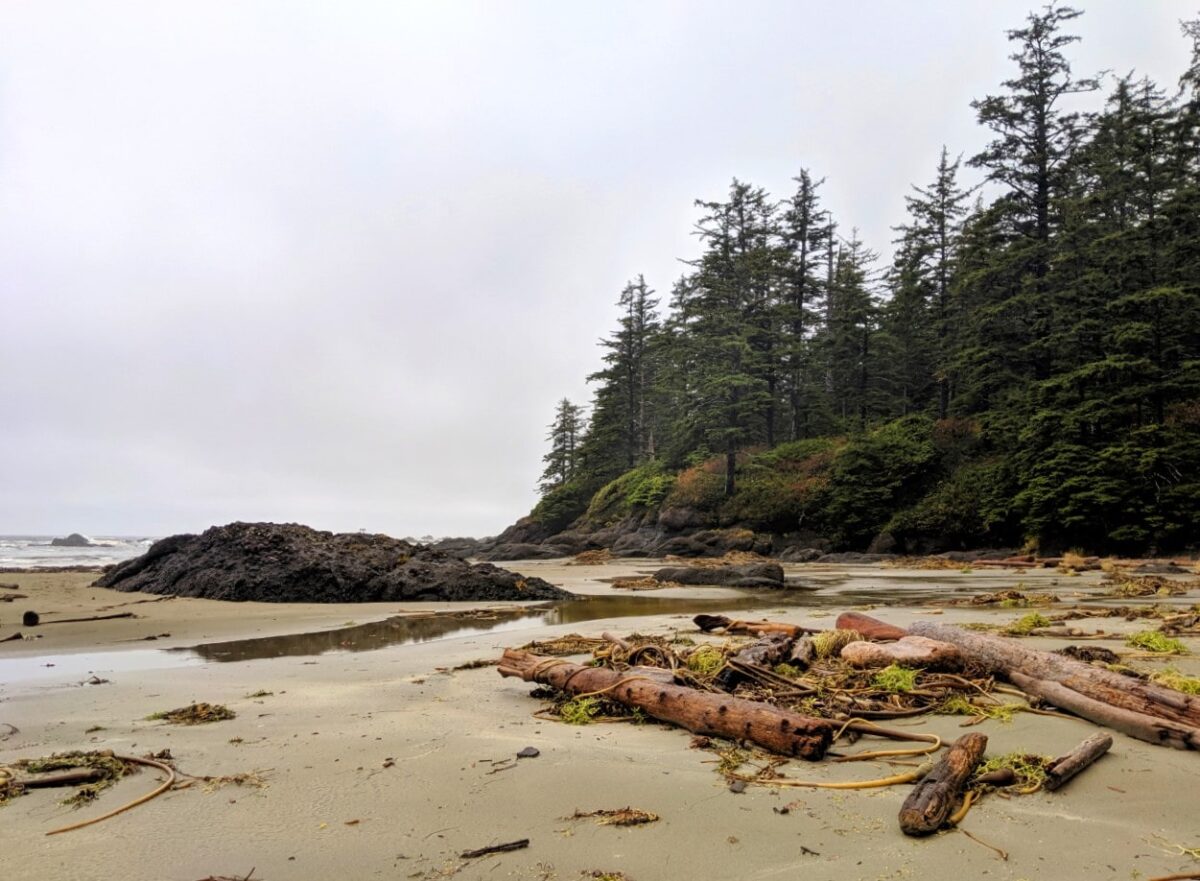 Things to do on Vancouver Island, British Columbia

Vancouver Island is home to a host of activities and attractions. Those who like the outdoors will feel especially at home here.

Vancouver Island is home a unique mix of black bears, elk, cougars, wolves and deer. Orca whales, porpoises and grey whales are found in the ocean.

Try a whale watching tour in Victoria, Tofino or Campbell River or better still, an orca kayaking adventure. Keep in mind that there are no grizzly bears or moose on Vancouver Island.

If you like rainforest, rugged coast and mountains, you should not miss hiking on Vancouver Island. There are a number of rewarding multi-day hikes (West Coast Trail, Cape Scott, Nootka Trail, Juan de Fuca) along the coast alongside some excellent alpine options in Strathcona Park.

There are also plenty of day hikes offering a taste of wilderness.

Vancouver Island has an abundance of both freshwater and saltwater kayaking and canoeing opportunities. Lakes can be found almost everywhere but are especially concentrated around Campbell River.

Some favoured spots for kayaking include the Broken Islands, the Gulf Islands, the Discovery Islands, Johnstone Strait and Clayoquot Sound.

Some of the world’s largest and oldest trees can be found on Vancouver Island. The easiest way to view some is to visit Cathedral Grove near Port Alberni.

Some of the towering Douglas Fir trees here are more than 800 years old. To escape the crowds, head to Port Renfrew or Carmanah Walbran Provincial Park.

A coastal lifestyle and mild year-round temperatures mean that Vancouver Island has an abundance of local produce on offer.

Many cultures have shaped Vancouver Island as we know it today. Aboriginal people were here long before any European settlers. Influence can still be seen in artwork, place names, traditional food and historical travelling routes.

More recent residents have also made their mark; Victoria’s Chinatown is the second oldest in North America after San Francisco.

Looking to book a stay in Victoria?

Read next: A Hiking and Paddling Adventure to Canada’s highest waterfall, Vancouver Island

How to get to Vancouver Island

Vancouver Island is accessible in two main ways from the British Columbia mainland. Most visitors arrive by ferry.

The vehicle and passenger ferries between British Columbia’s mainland and Vancouver Island are run by just one company, BC Ferries.

From the Vancouver area, there are three direct routes to Vancouver Island:

There are numerous ferries operating every day. Ferry schedules, distance and fares vary but for the most part, the journey between the BC mainland and Vancouver Island takes around 2-2.5 hours.

For fares and schedules, check the most updated information on the BC Ferries’ website.

Since 2018, there has been a passenger-only ferry service running between downtown Victoria and downtown Vancouver.

Travelling on BC ferries

For those with limited time or travelling from beyond mainland British Columbia, flying to Vancouver Island is can be convenient. There are two methods to do so:

Now you’ve got the basics down, check out more about Vancouver Island in these other great posts:

How to Find Big Trees on Vancouver Island

25+ of the Best Campgrounds on Vancouver Island

A Guide to Storm Watching in Tofino, Vancouver Island

To the End of Vancouver Island: Cape Scott Lighthouse Hike

How to Explore Vancouver Island for Free

5 Great Reasons Why You Must Visit Vancouver Island, Canada

Check out these recently published posts:

One half of the Canadian/British couple behind Off Track Travel, Gemma is happiest when hiking on the trail or planning the next big travel adventure. JR and Gemma are currently based in the beautiful Okanagan Valley, British Columbia, Canada

Welcome to Off Track Travel!

Hey there! We are Jean Robert and Gemma, a British-Canadian couple who love to explore beyond the beaten path by foot, road and paddle.

We love sharing these experiences to inspire and help others to do the same. Come join us on our adventures!

This site features affiliate links for products and services. This means that we may receive a small percentage sales made through these links at no extra cost to you.

Off Track Travel is a participant in the Amazon Services LLC Associates Program, an affiliate advertising program designed to provide a means for us to earn fees by linking to Amazon.com and affiliated sites.