You have reached the cached page for https://gamerant.com/best-survival-horror-games-ever-ranked/
Below is a snapshot of the Web page as it appeared on 2/26/2021 (the last time our crawler visited it). This is the version of the page that was used for ranking your search results. The page may have changed since we last cached it. To see what might have changed (without the highlights), go to the current page.
You searched for: what is survival horror series 2 We have highlighted matching words that appear in the page below.
Bing is not responsible for the content of this page.
10 Best Survival Horror Games Of All Time, Ranked | Game Rant
By Anastasia Maillot Published Jan 22, 2020
Email

A good survival horror game is often a mixture of good story and great scares. It doesn't rely only on cheap jump scares, but actually develops interesting and terrifying monsters that hunt down your characters. With horror being such a big franchise, it's not often you see a truly good title put out on the market.

RELATED: 10 Horror Games That Take The Longest To Beat

That being said, if you're a survival horror fanatic and you're looking to play something new, we've got you covered with our list of 10 of the best survival horror games of all time, ranked. These games have left a lasting impression in the genre in the past years, and will continue to define survival horror for decades to come.

For those who love shaping their own story, Until Dawn is one of the greatest survival horror games. It's set up like a classic slasher horror film, where multiple characters must try to survive the horrors that haunt them. As you control numerous characters in different scenes, you need to collect clues to help you move forward.

Sometimes, you'll make decisions and find items that will affect the future, providing you with a brief vision of the future. This will help you make the right choices when the time is right. Just remember, in order for everyone to survive, every detail must fall perfectly in place!

RELATED: The 10 Worst Horror Games Of The Decade (According To Metacritic)

During his investigation, he's transported into an otherworldly place filled with terrifying monsters. With the original creator of the Resident Evil series as one of the primary developers, you can expect a haunting survival story full of horrors and scares.

When Outlast first came out, it easily became one of the scariest games of its time. When an investigative journalist arrives to an abandoned mental hospital while hunting for a big scoop, he becomes trapped in the facility and is faced with its deranged inhabitants.

Outlast is one of those games that plays perfectly with first-person perspective. Including the camera function that helps you see in the dark, it pairs found footage horror movies with survival horror games perfectly, creating a chill-inducing and gore-filled experience.

There's no horror movie quite like the original Alien, which is why Alien: Isolation became such a popular and amazing title. Its aesthetics are inspired by the first movie, and the game transports us back to a time shortly after the Nostromo's fall, when Amanda Ripley is struggling to find out what happened to her mother.

As she ends up stranded to a space station which has been taken over by hostile synthetics and the Xenomorphs themselves, she must fight for her survival against the perfect organism itself. With beautiful sound design, tons of gameplay and an actually challenging and intelligent alien AI to flee, this game provides fun and scares for hours.

When Simon goes for a brain scan after a car accident, he suddenly finds himself transported into PATHOS-II, an underwater research base at the bottom of the ocean. Overrun by strange robotic creatures that seem to have a will of their own, Simon needs to find a way out of the derelict facility that threatens to burst at its seams.

RELATED: The 10 Worst Choices You Can Make In Any Horror Game, Ranked

SOMA's a typical survival horror in the sense that you get no weapons to help you on your way. Stealth and wits will get you far against even the most ferocious and fast-moving enemies. The game is extremely imaginative in its aesthetics, and its story is guaranteed to leave you emotional and in awe.

Many of the survival horror games we have take place in the future, but Amnesia: The Dark Descent went a vastly different route. In the 1830s, Daniel wakes up with severe amnesia inside a castle he hardly remembers getting himself into. Hunted down by terrifying monsters, he needs to find a way to remember the past.

This game was a massive success upon its release, due to its incredible stealth and sanity mechanics, which would force players to be sparing with their lantern oil. Moreover, it had one of the most complex and interesting story lines, which combined historical themes with science fiction.

This list wouldn't be complete without the predecessor to most modern sci-fi survival horror titles: Dead Space. Isaac Clarke is tasked with investigating a mining ship that has been taken over by horrible monsters known as Necromorphs. Through various clues, he eventually discovers the truth behind the ship's fate.

Many games have tried to do what Dead Space accomplished with sci-fi horror, but in vain. With an arsenal of weapons, it's definitely one of the more FPS style survival horror games, but its incredible design and popularity is absolutely undeniable.

When James Sunderland receives a message from his missing wife to meet him in Silent Hill, he leaves off to the mysterious town immediately. However, as he arrives, he's faced with an array of zombie-like monsters and other apparitions that look straight out of his worst nightmares.

The Silent Hill franchise is the master of survival horror, and this installment of the series proves it. James' story is not only incredibly emotional, but full of iconic, claustrophobic and disturbing moments as he struggles to make his way to see his long lost wife.

If there's one remake that really succeeded, it was that of Resident Evil 2. With the option of either playing as Claire or Leon, both parties need to survive through the night in Raccoon City which has been infected by a powerful virus, courtesy of Umbrella Corporation.

As you navigate the police station to escape from Lickers or worse yet the Tyrant, you'll be tasked with completing typical Resident Evil style puzzled to access areas and proceed in the story. While the remake doesn't have those atmospheric fixed camera angles, it's still a nice homage to the original game.

There's no question about the fact that The Last Of Us is one of the best games of the last twenty years. While it would take forever to elaborate why, it's better to experience the game first hand. If you haven't already ventured the zombie apocalypse as Joel and Ellie, we strongly recommend you do.

The Last Of Us is a mix of really fluid game play, which includes both combat and stealth options. The enemies feel threatening and real, and with Ellie by your side, the stakes are high. Even years after, the graphics look amazing and the story will move even the toughest ones to tears.

NEXT: 5 Survival Horror Games That Have Lost Their Way (& 5 That Still Do It Right) 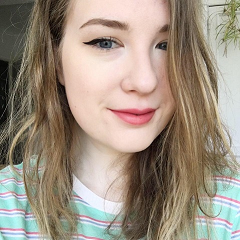 Tea lover and video game obsessed writing enthusiast with her very own Overwatch team, Anastasia writes about games that leave an impression on her and make her come back time and time again.

10 Facts About Max Payne The Games Never Tell You

World Of Warcraft: 10 Things You Need To Know About Sylvanas Windrunner

15 Of The Weirdest Sims 4 Mods

One Piece: Every Pirate Crew Part of The Straw Hat Grand Fleet

Valheim: All Tool Types & What They're Used For

Read Next in gaming

Assassin's Creed: The 10 Most Powerful Pieces Of Eden

Nathan Drake Vs. Lara Croft: Who Is The Best Treasure Hunter?

5 Assassin’s Creed Settings That Actually Need To Be Revisited

The 10 Best Horror Games Of The Generation (According To Metacritic)

Skyrim: 10 Amazing Quests You Should Complete Before The Elder Scrolls 6

One Piece: 10 Best Filler Arcs According To IMDb

The 15 Weirdest Skyrim Mods Ever