What You Must Know About Rocky Mountain Spotted Fever

This tick-borne disease can be deadly, especially in children

By Catherine Roberts
SHARES
When you shop through retailer links on our site, we may earn affiliate commissions. 100% of the fees we collect are used to support our nonprofit mission. Learn more.

According to a 2012 study in the American Journal of Tropical Medicine and Hygiene, between 1999 and 2007, RMSF killed about 14 people in the U.S. every year.

Rocky Mountain spotted fever was named for where it was discovered more than a century ago, and for the spotted rash that often occurs when it damages blood vessels under the skin.

But today, the disease (along with other tick-borne spotted fevers) occurs all across the U.S., not just in the Rocky Mountains. And even though a rash does occur in 90 percent of cases, it often doesn’t appear until after the onset of more vague, flu-like symptoms. In some cases, waiting to treat RMSF until a rash occurs can be fatal.

Here are answers to several key questions about RMSF, what you need to know about this sometimes deadly disease, and how to protect yourself.

How Dangerous Is RMSF?

Rocky Mountain spotted fever is one of a group of diseases called spotted fever rickettsiosis. The bacteria that cause these spotted fevers live in organisms such as ticks, fleas, and mites—which can transmit them to humans, says Lucas Blanton, M.D., assistant professor of internal medicine at the University of Texas Medical Branch at Galveston.

Rocky Mountain spotted fever is the most dangerous of all of the spotted fevers. If left untreated, the disease can be fatal in 20 percent of cases or more (in comparison, Lyme disease is virtually never fatal, and the CDC has only documented 9 cases of Lyme fatally infecting the heart from 1985 to 2018).

Some people, even if they survive the disease, can be left with severe and permanent problems. Damage to blood vessels caused by RMSF can lead to necrosis, or the death of body tissue. This can in turn lead to hearing loss, paralysis, mental disability, organ damage, or amputation. Young children and older adults infected with RMSF are at a greater risk for severe disease and death.

With prompt antibiotic treatment, RMSF is much less likely to be fatal. Research suggests that in recent years, the fatality rate of all spotted fevers has fallen to less than 1 percent in the U.S. (though it’s around 1.6 percent in children younger than 10). The researchers suggest this may be in part because of increased availability of effective antibiotic treatment and increased awareness of tick-borne diseases, but they also caution that due to the difficulty in distinguishing between true RMSF and similar ailments, that less-than-1-percent fatality rate also includes other, less severe spotted fevers.

How Common Is RMSF?

According to the CDC, it’s unclear what proportion of these cases are RMSF or another spotted fever. Some scientists suspect that, as with Lyme disease, the number of reported cases underestimates the true number of spotted fever cases that occur. 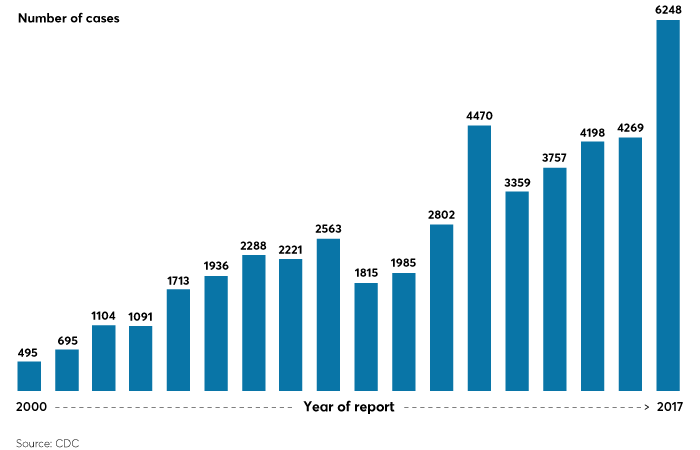 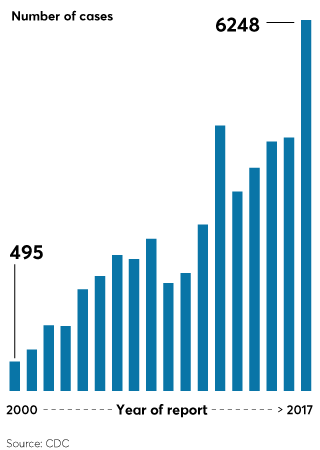 How Could You Contract RMSF?

You can catch RMSF from three different species of ticks in the U.S.: the American dog tick, the Rocky Mountain wood tick, and the brown dog tick (to see what these ticks look like, check out our visual guide).

The third tick that can transmit RMSF in the U.S., the brown dog tick, is a little different. For one thing, it’s found all over the world, and in all 50 states. And unlike other ticks, it can survive indoors, infesting areas such as dog kennels or even homes. “It doesn't need to be in the forest. It can live its entire life in your home,” says Janet Foley, D.V.M., Ph.D., a professor of vector-borne disease ecology at the University of California, Davis School of Veterinary Medicine.

The brown dog tick, whether larva, nymph, or adult, prefers to feed on dogs. That’s why owning a dog is a risk factor for being bitten by the brown dog tick, according to an analysis in the journal Parasites & Vectors. Brown dog ticks will feed on humans if the opportunity arises, and once the tick is established in or around your home or on your dog, you’re more likely to become a host for the pest yourself.

The brown dog tick wasn’t recognized as a vector for RMSF until the early 2000s, when scientists connected it with outbreaks of the disease in Arizona, particularly in Native American communities with large populations of free roaming dogs. According to the CDC, between 2003 and 2018, health officials documented more than 400 cases of the disease in Arizona, resulting in 25 deaths.

A CDC program to combat the brown dog tick population in these communities, called “RMSF Rodeo”—which involved registering, tethering, and providing tick collars for dogs; regularly applying acaricides (pesticides for ticks) in yards of participating homes (and inside infested homes); and providing free spaying and neutering for dogs—significantly reduced tick infestations on dogs, and cut the incidence of RMSF cases by 43 percent, according to a 2014 study in the journal Plos One.

Similar outbreaks are ongoing along the border between the U.S. and Mexico.

What Should You Do If You Think You Have RMSF?

Unfortunately the early symptoms of RMSF are not especially specific: a fever, headache, and muscle pain. Nausea and vomiting are also possible. A rash occurs in 90 percent of cases—but it often doesn’t appear in the first few days of symptoms. That can pose a problem, since without a rash, doctors may be more hesitant to diagnose RMSF. In fact, a rash that appears late in the course of the disease is linked with a greater risk of severe illness, because it can delay diagnosis.

When a rash does appear, it usually begins on the ankles and wrists, and spreads to your trunk area from there. Eventually the rash can spread to your palms and the soles of your feet—but usually not until the disease is advanced. (A doctor shouldn’t rule out RMSF if a rash doesn’t appear on your palms or soles, Blanton cautions.)

Given that the symptoms may be relatively vague at first, whenever you visit your doctor with flu-like symptoms, be sure and share any recent travel and any outdoor activities that might have put you in the path of a tick (that could include activity in your own yard, if you live in an area where ticks are common). Only about half of people who have RMSF remember being bitten by a tick—if you do know you were bitten, tell the doctor, but keep in mind that you could have been bitten without realizing it.

If your symptoms and recent activities suggest you could have RMSF, and your doctor has ruled out other possible explanations, your doctor should prescribe the antibiotic doxycycline, the CDC says. It’s highly effective against RMSF, and blood testing for the bacteria isn’t effective until you’ve had the disease for about a week. That’s too long to wait to start treatment—the CDC says that treatment with doxycycline needs to be started within the first five days of symptoms to reduce the chances of severe illness and death. (Doxycycline is also the first-line treatment for a number of other tick-borne diseases, including Lyme.)

And remember: despite the name “Rocky Mountain spotted fever," your doctor shouldn’t wait for a rash to appear to begin treatment, if she suspects RMSF.

How Can You Prevent RMSF?

Preventing tick bites is key to avoiding RMSF. Use an EPA-registered insect repellent that’s labeled for protection against ticks, such as one of our top rated products here:

When you do go outside in a wooded, brushy, or grassy area, it’s best to wear long sleeves and pants, and to tuck your pants into your socks.

If you do find a tick, remove it as soon as you can with fine-tipped tweezers. Estimates vary about how long it takes for a tick to give you RMSF, but the CDC advises that the bacteria that cause it could be transmitted in as little as two hours. So removing any attached ticks early can help cut your chances of getting sick.

Finally, pets can transfer ticks to people, and in the case of brown dog ticks, can lead to the ticks infesting your home. Ask your vet about getting an effective anti-tick product for your dog or cat.

How to Keep Ticks out of Your Yard

Editor's Note: An earlier version of this article stated that according to one expert, a tick must be attached for about 24 hours before Rocky Mountain spotted fever can be transmitted. We've updated the story to reflect that the CDC advises consumers that RMSF could be transmitted by an attached tick in as little as two hours.

As a science journalist, my goal is to empower consumers to make informed decisions about health products, practices, and treatments. I aim to investigate what works, what doesn't, and what may be causing actual harm when it comes to people's health. As a civilian, my passions include science fiction, running, Queens, and my cat. Follow me on Twitter: @catharob.

Should You Use Natural Tick Prevention for Your Dog or Cat?
Best Insect Repellents for You and Your Family
4 Common Myths About Ticks Debunked
Should You Spray Your Yard for Mosquitoes and Ticks?