You have reached the cached page for http://denguepcr.com/dengue-virus/
Below is a snapshot of the Web page as it appeared on 12/24/2020 (the last time our crawler visited it). This is the version of the page that was used for ranking your search results. The page may have changed since we last cached it. To see what might have changed (without the highlights), go to the current page.
You searched for: what are some telling signs of dengue epidemic We have highlighted matching words that appear in the page below.
Bing is not responsible for the content of this page.
Dengue Virus – Dengue PCR
Home » Dengue Virus

Dengue is caused by Dengue virus (DENV), a mosquito-borne flavivirus. DENV is a single stranded RNA positive-strand virus of the family Flaviviridae, genus Flavivirus. This genus includes also the West Nile virus, Tick-borne Encephalitis Virus, Yellow Fever Virus, and several other viruses, which may cause encephalitis. DENV causes a wide range of diseases in humans, from a self limited Dengue Fever (DF) to a life-threatening syndrome called Dengue Hemorrhagic Fever (DHF) or Dengue Shock Syndrome (DSS). 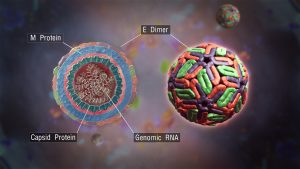 There are four antigenically different serotypes of the virus:

Here, a serotype is a group of viruses classified together based on their antigens on the surface of the virus. These four subtypes are different strains of dengue virus that have 60-80% homology between each other. The major difference for humans lies in subtle differences in the surface proteins of the different dengue subtypes. Infection induces long-life protection against the infecting serotype, but it gives only a short time cross protective immunity against the other types. The first infection cause mostly minor disease, but secondary infections has been reported to cause severe diseases (DHF or DSS) in both children and adults.

The virus has a genome of about 11000 bases that encodes a single large polyprotein that is subsequently cleaved into several structural and non-structural mature peptides. The polyprotein is divided into three structural proteins, C, prM, E; seven nonstructural proteins, NS1, NS2a, NS2b, NS3, NS4a, NS4b, NS5; and short non-coding regions on both the 5′ and 3′ ends (see figure 2). The structural proteins are the capsid (C) protein, the envelope (E) glycoprotein and the membrane (M) protein, itself derived by furine-mediated cleavage from a prM precursor. The E glycoprotein is responsible for virion attachment to receptor and fusion of the virus envelope with the target cell membrane and bears the virus neutralization epitopes. In addition to the E glycoprotein, only one other viral protein, NS1, has been associated with a role in protective immunity. NS3 is a protease and a helicase, whereas NS5 is the RNA polymerase in charge of viral RNA replication.

After being bitten by a mosquito carrying the dengue virus, the incubation period ranges from 3 to 14 (usually 4 to 7) days before the signs and symptoms of dengue appear. Dengue occurs in two forms:

The disease manifests as a sudden onset of severe headache, chills, pain upon moving the eyes, and low backache. Painful aching in the legs and joints (myalgias and arthralgias—severe pain that gives it the nick-name break-bone fever or bonecrusher disease) occurs during the first hours of illness. The temperature rises quickly as high as 40° C, with relative low heart rate (bradycardia) and low blood pressure (hypotension). The dengue rash is characteristically bright red petechiae and usually appears first on the lower limbs and the chest (see figure 2). The glands (lymph nodes) in the neck and groin are often swollen. In some patients, it spreads to cover most of the body. There may also be gastritis with some combination of associated abdominal pain, nausea, vomiting, or diarrhea. Some cases develop much milder symptoms which can be misdiagnosed as influenza, chikungunya, or other viral infection when no rash is present. The classic dengue fever lasts about six to seven days, with a smaller peak of fever at the trailing end of the disease (the so-called biphasic pattern). Clinically, the platelet count will drop until the patient’s temperature is normal.

Dengue hemorrhagic fever (DHF) is caused by the same viruses and is characterized by increased vascular permeability, hypovolaemia and abnormal blood clotting mechanisms. DHF is a potentially deadly complication with symptoms similar to those of dengue fever, but after several days the patient becomes irritable, restless, and sweaty. The illness often begins with a sudden rise in temperature accompanied by facial flush and other flu-like symptoms. The fever usually continues for two to seven days and can be as high as 41°C, possibly with convulsions and other complications.

In moderate DHF cases, all signs and symptoms abate after the fever subsides. In severe cases, the patient’s condition may suddenly deteriorate after a few days of fever; the temperature drops, followed by signs of circulatory failure, and the patient may rapidly go into a critical state of shock. The Dengue Shock Syndrome (DSS) is characterized by bleeding that may appear as tiny spots of blood on the skin (petechiae) and larger patches of blood under the skin (ecchymoses). Minor injuries may cause bleeding. Shock may cause death within 12 to 24 hours. Patients can recover following appropriate medical treatment.

Dengue viruses are transmitted to humans through the bites of infective female Aedes mosquitoes. Most commonly, the mosquitoes involved are Aedes aegypti and Aedes albopictus, two species which can also transmit other mosquito-borne viruses, including zika and chikungunya.

The main transmission is through mosquitoes that generally acquire the virus while feeding on the blood of an infected person. After virus incubation for eight to ten days, an infected mosquito is capable, during probing and blood feeding, of transmitting the virus for the rest of its life. There is no way to tell if a mosquito is carrying the dengue virus. Infected female mosquitoes may also transmit the virus to their offspring by transovarial (via the eggs) transmission, but the role of this in sustaining transmission of the virus to humans has not yet been defined.

Infected humans are the main carriers and multipliers of the virus, and serving as a source of the virus for uninfected mosquitoes. The virus circulates in the blood of infected humans for two to seven days, at approximately the same time that they have a fever. Aedes mosquitoes may acquire the virus when they feed on an individual during this period.

Epidemic dengue transmission occurs when dengue virus is introduced into a region as an isolated event that involves a single viral strain. If the number of vectors and susceptible pediatric and adult hosts is sufficient, explosive transmission can occur, with an infection incidence of 25-50%. Mosquito-control efforts, changes in weather, and herd immunity contribute to the control of these epidemics. This is the current pattern of transmission in parts of Africa and South America, areas of Asia where the virus has re-emerged, and small island nations. Travelers to these areas are at increased risk of acquiring dengue during these periods of epidemic transmission.

Hyperendemic dengue transmission is characterized by the continuous circulation of multiple viral serotypes in an area where a large pool of susceptible hosts and a competent vector (with or without seasonal variation) are constantly present. This is the predominant pattern of global transmission. In these populations, antibody prevalence increases with age and most adults are immune. Hyperendemic transmission appears to be a major risk for Dengue Haemorrhagic Fever (DHF). Travelers to these areas are more likely to be infected than are travelers to areas that experience only epidemic transmission.

The diagnosis of dengue is usually made clinically. The classic picture is high fever with no localising source of infection, a petechial rash with thrombocytopenia and relative leukopenia (low platelet and white blood cell count). Care has to be taken as diagnosis of Dengue Haemorrhagic Fever (DHF) can mask end stage liver disease and vice versa. If one has persistent fever for more that 2 days then one should go for a complete blood checkup (CBC). If the platelet count and WBC count are below than their usual range one should go for Dengue Antigen test.

A dependable immediate information of the Dengue diagnostics in the rural areas can be performed by the introduction of Rapid Diagnostic Test kits which also differentiates between primary and secondary dengue infections. Serology and polymerase chain reaction (PCR) studies are available to confirm the diagnosis of dengue if clinically indicated. Dengue can be a life threatening fever.

Etiologic confirmation can be obtained by isolating infectious virus, demonstrating viral antigen by immunoassay, or viral genome by PCR in serum or blood. Serologic diagnosis is achieved by IgM antibody-capture by enzyme-linked immunosorbent assay (MAC – ELISA) in two blood specimen taken in a period of 14 days from each other. The first specimen, taken till the seventh day of the disease, can also be useful for virus isolation by inoculation of A. albopictus cells or adults mosquitoes, with specific indentification of virus by immunofluorescence tests employing monoclonal antibody reagents.