You have reached the cached page for https://www.rottentomatoes.com/m/wedding_crashers
Below is a snapshot of the Web page as it appeared on 1/19/2021 (the last time our crawler visited it). This is the version of the page that was used for ranking your search results. The page may have changed since we last cached it. To see what might have changed (without the highlights), go to the current page.
You searched for: wedding crashers movie We have highlighted matching words that appear in the page below.
Bing is not responsible for the content of this page.
Wedding Crashers (2005) - Rotten Tomatoes
Home
Top Box Office
Tickets & Showtimes
DVD & Streaming
TV
News 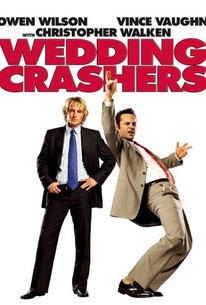 Wedding Crashers is both raunchy and sweet, and features top-notch comic performances from Vince Vaughn and Owen Wilson.

Jeremy (Vince Vaughn) and John (Owen Wilson) are divorce mediators who spend their free time crashing wedding receptions. For the irrepressible duo, there are few better ways to drink for free and bed vulnerable women. So when Secretary of the Treasury William Cleary (Christopher Walken) announces the wedding of his daughter, the pair make it their mission to crash the high-profile event. But their game hits a bump in the road when John locks eyes with bridesmaid Claire (Rachel McAdams).

50 Movies & TV Shows to Netflix and Chill with This Valentine’s Day
All 42 Fresh Movies and Originals Coming to Netflix in January
Watch Online: Pulp Fiction, Jaws, Wedding Crashers and More Certified Fresh Movies on Netflix and Amazon Prime
View All