You have reached the cached page for https://rationalwiki.org/wiki/War_on_Christmas
Below is a snapshot of the Web page as it appeared on 3/6/2021 (the last time our crawler visited it). This is the version of the page that was used for ranking your search results. The page may have changed since we last cached it. To see what might have changed (without the highlights), go to the current page.
You searched for: watership down tv tropes We have highlighted matching words that appear in the page below.
Bing is not responsible for the content of this page.
War on Christmas - RationalWiki

From RationalWiki
Jump to: navigation, search

The so-called "War on Christmas" (or, less sensationally, the Christmas controversy) is a right-wing demagogic neologism referring to real or imagined secularist attempts to keep the December solstice holiday shopping season culturally inclusive. It sets the standard by which all other manufactroversies may be judged, and is most famously hawked every year by none other than now-former Fox News Channel contributor Bill O'Reilly.

Few people, even among those who promote this idea, know that its modern-day form started out as a conspiracy theory promulgated by groups affiliated with the John Birch Society.[2] In 1959, they released a pamphlet called "There Goes Christmas", in which they claimed that there was a new communist plot to "take the Christ out of Christmas" by replacing Christmas decorations with jewish United Nations iconography. The Society claimed this formed part of a larger push to stamp out religion altogether and to cede US sovereignty to the UN. They urged members to boycott any stores with "inappropriate

The JBS itself had developed the idea of a War on Christmas from inter-war anti-Semitic publications, particularly from Henry Ford's The International Jew. Detecting a part of a supposed move to take over the world, the JBS claimed that Jews were launching a "war on Christianity", with one paper lamenting, "Last Christmas most people had a hard time finding Christmas cards that indicated in any way that Christmas commemorated Someone's Birth." This was (of course) seen as a plot by Jewish conspirators who "consider any public expression of Christian character as being derogatory to [their] religion."[4] Sound familiar? 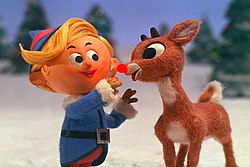 Oy! What a schnoz! 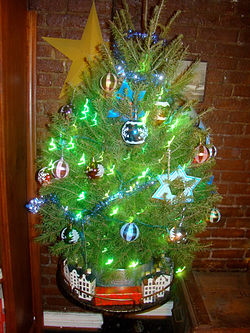 Rockin' around the Christmas tree,
Have a happy Hanukkah.

Ironically enough, Jews wrote or cowrote quite a few of the most popular 20th-century Christmas songs.[5][6] For instance:

Then again, since these tunes focus on the nonreligious aspects of Christmas, those so inclined will eagerly put such authorships forward as "evidence" of a fiendish Jewish plot to secularize the holiday.[7] Oh, heck! Let's all just sing Christmas songs around the Hanukkah bush!

The "War on Christmas" meme was revived in the 1990s by paleoconservative, VDARE founder, white nationalist, anti-Semite, and all-around wingnut Peter Brimelow, as part of a larger battle against multiculturalism.[8]

However, no individual is more responsible for dragging the concept from the right-wing fringe into "mainstream" media culture, and making it an annual tradition as reliable and inevitable as the holiday season itself, than Bill O'Reilly, who is apparently horrified — yes, horrified! — that Wal-Mart greeters might wish that shoppers enjoy "Happy Holidays" — despite the fact that his own website sold "holiday ornaments" rather than X-Mas ornaments.[9] Did anyone mention hypocrisy?

The fact that "Happy Holidays" refers to over a dozen holidays (see below) never seems to have any real effect on the demagoguery; neither does the idea that Christmas itself was first made by blatantly ripping off a pagan holiday (let's hear it for the War on Yule!) or that puritanical types have made a few wars against Christmas themselves (see below). So, the Religious Right keeps yammering about it and secularists keep making jokes about going along with it.[notes 1] As the years go by, the semi-ironic "Merry Christmas" greeting is gaining ground, used by some as a kind of meta-statement on the ongoing controversy. (It should be acknowledged that there are, in fact, some people in the social justice community who do object to "Merry Christmas" and even "Happy Holidays" as expressions of Christian cultural imperialism in the West.[10] Whether one agrees with their stance or not, however, said people are nowhere close in either number or influence to being the Christmas-destroying juggernaut of conservatives' fevered imaginations.)

Despite the best efforts of the sinister anti-Christmas warriors, the proportion of American Christians who feel a religious meaning in Christmas is increasing,[11] though religious belief is generally declining in the US. This suggests the unstated premise that the meaning of Christmas rests upon people using the word to sell merchandise is not correct.

In 2016, President-elect Donald Trump declared an end to the War on Christmas, basically by declaring war on everyone who didn't say "Merry Christmas".[12] Trump himself, oddly enough, had previously waged war on Christmas when his management company banned Christmas trees from the lobby of one of his apartment houses in 1981.[13] 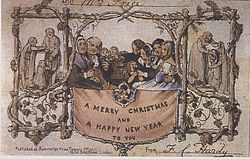 Let's all get drunk for Christmas, like the good old days! — the first Christmas card

Many right-wingers misrepresent the history of Christian celebrations, in an attempt to claim that Christmas in the past was all about religion but now is purely secular with no mention of Jesus — for example in 2017 there were claims that Australian schools were "trying to take pictures of Jesus out of Christmas cards".[14] As well as being completely made up, this ignores the fact that the very first Christmas card ever made had no mention of Christ, the nativity, God, angels or anything religious. Designed by John Callcott Horsley in 1843, it featured a scene of people drinking wine, including a mother feeding it to her young child, with generic scenes of charity at either side.[15][16] Most of Christmas tradition was invented in the 19th century, by people such as Charles Dickens;[17] his novella A Christmas Carol focuses on Christmas as a time for charity and spending time with loved ones rather than emphasising the Christmas message, and largely secular Victorian traditions like roast dinners (also popularised in A Christmas Carol), trees, and cards show the lack of religious significance.

So what's a war without war profiteers?[edit]

Starbucks waged the War on Christmas in 2015, as proven here. One can view the hidden message by adding just a few lines with a magic marker.

The American Family Association (AFA) issues a yearly list of nationwide retail outlets often owned by huge, multinational corporations companies that they say are "for," "marginal on," or "against" Christmas. Supposedly the "for Christmas" companies use the word "Christmas" instead of "Xmas" (which is highly amusing, since the "X" in "Xmas" is not a placeholder to "cross out" Christ, but the Greek letter chi (χ), which is the first letter of "Christ" in Greek; it's an abbreviation invented by Christians and used for centuries) or "Holiday" in their advertising, while the "against Christmas" companies do not.[18][19] Of course, the AFA doesn't seem to notice that many of the companies on the "for Christmas" list often substitute "Holiday" for "Christmas" in their ads, or minimize the number of references to the holidays altogether. This has led to speculation by godless, gay, pinko-commies critics that maybe the AFA receives compensation for inclusion on the "for Christmas" list, a claim that the AFA denies.[20]

They've messed up our economy![edit]

In 2008, the ante was raised as a columnist blamed the year's economic crisis on the War on Christmas. In true Wall Street Journal op-ed style, Daniel Henninger said that the push against Christmas is leading us to a "Mad Max" type environment.[21]

The War in politics[edit] 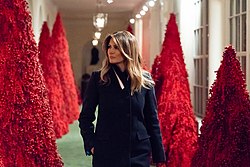 Bloody hell, the war is over and nobody told us!

In 2007, even some of the Presidential candidates took up the war, with Mike Huckabee claiming that it might be "controversial," but he was going to wish the gathered Iowa Republicans a "Merry Christmas".[22] This was intensified in 2015-16 under Donald Trump.[notes 2] Trump's wife, First Lady Melania Trump officially declared the war over in 2018 when she told her then-friend on the phone,[23]

Weapons used in the war[edit]

Fighting for our right to war on Christmas

In a twist that breaks an irony meter or two, many of the times that a war has actually been declared on Christmas, it was Christians who were the ones warring against it.

Artist's depiction of the 1914 Christmas Truce

The Christmas Truce of 1914 was a relatively widespread phenomenon that occurred in the trenches of World War One. However, the high commands of all sides involved quickly quashed this display of brotherly love, adding another brief page to the War on Christmas.

Following the COVID-19 pandemic and many statewide social-distancing orders against public gatherings, some churches have resisted having internet church services in favor of in-person services, declaring a "war on Easter".[39] Reverend Rodney Howard-Browne of Florida was arrested for unlawful assembly.[39] Howard-Browne's previous claim to fame was giving away AR-15 assault rifles at his church and encouraging congregants to bring their guns to church.[39] Pastor Tony Spell of Louisiana was also charged with misdemeanors for holding an in-person church gathering.[39]

In 2019 and 2020 some figures on the Right, including then-President Trump, suggested that Thanksgiving was now being targeted by liberals for erasure and/or renaming.[40][41]