You have reached the cached page for https://www.rottentomatoes.com/m/trolls_world_tour
Below is a snapshot of the Web page as it appeared on 3/1/2021 (the last time our crawler visited it). This is the version of the page that was used for ranking your search results. The page may have changed since we last cached it. To see what might have changed (without the highlights), go to the current page.
You searched for: watch little children movie online free 123movies trolls world tour We have highlighted matching words that appear in the page below.
Bing is not responsible for the content of this page.
Trolls World Tour (2020) - Rotten Tomatoes
Home
Top Box Office
Tickets & Showtimes
DVD & Streaming
TV
News 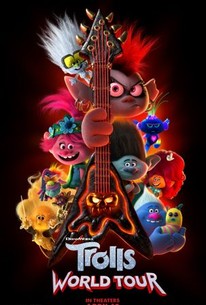 Poppy and Branch discover that there are six different troll tribes scattered over six different lands. Each tribe is also devoted to six different kinds of music -- funk, country, techno, classical, pop and rock. When rockers Queen Barb and King Thrash set out to destroy the other music, Poppy and Branch embark on a daring mission to unite the trolls and save the diverse melodies from becoming extinct.

Breakdown of 2020 Movie Delays, and When They Will Hit Theaters
The 38 Most Anticipated Movies of 2020
Trolls World Tour, Ip Man 4, and Gretel & Hansel Hit Digital Release This Week
View All