You have reached the cached page for https://www.imdb.com/title/tt0000000001798709/
Below is a snapshot of the Web page as it appeared on 1/7/2021 (the last time our crawler visited it). This is the version of the page that was used for ranking your search results. The page may have changed since we last cached it. To see what might have changed (without the highlights), go to the current page.
You searched for: watch her movie We have highlighted matching words that appear in the page below.
Bing is not responsible for the content of this page.
Her (2013) - IMDb
Get a sneak peek of the new version of this page.
Check it out now Learn more
FULL CAST AND CREW | TRIVIA | USER REVIEWS | IMDbPro | MORE LESS
0Check in
X I'm Watching This!
Keep track of everything you watch; tell your friends. 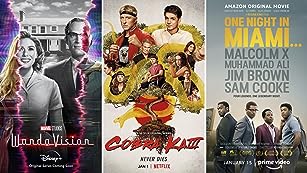 Daniel Radcliffe: Actors and Directors Who Inspire Me
a list of 5 images
updated 06 Jun 2016

Watch soon
a list of 22 titles
created 9 months ago

Search for "Her" on Amazon.com

Theodore is a lonely man in the final stages of his divorce. When he's not working as a letter writer, his down time is spent playing video games and occasionally hanging out with friends. He decides to purchase the new OS1, which is advertised as the world's first artificially intelligent operating system, "It's not just an operating system, it's a consciousness," the ad states. Theodore quickly finds himself drawn in with Samantha, the voice behind his OS1. As they start spending time together they grow closer and closer and eventually find themselves in love. Having fallen in love with his OS, Theodore finds himself dealing with feelings of both great joy and doubt. As an OS, Samantha has powerful intelligence that she uses to help Theodore in ways others hadn't, but how does she help him deal with his inner conflict of being in love with an OS? Written by Bob Philpot

During the set-up routine for the Samantha personal assistant OS, the main character is asked about his mother. His attempted answer is cut off, the synthesised voice says the process is finished, and the programme abruptly ends. This recalls the pioneering AI project ELIZA, created in the mid-1960s, which spoofed meaningful free-form communication by responding to specific verbal cues in human conversation. ELIZA initially stumped the scientific community as to how it pulled this illusion off, but was busted when challengers proposed metaphors and ELIZA answered in non sequiturs. The textbook example is: "Human: 'I've been thinking that necessity is the mother of invention.' ELIZA: 'Interesting. Tell me about your mother.'" See more »

At about 50:30 Amy takes a bite of some food but can be seen taking out the whole piece just before cutting to Theodore. When it shows her again she is still chewing on the bite. See more »

[first lines]
Theodore: [writing letter] "To my Chris. I've been thinking how I could possibly tell you how much you mean to me. I remember when I first started to fall in love with you like it was last night. Lying naked beside you in that tiny apartment - it suddenly hit me that I was part of this whole larger thing. Just like our parents - or our parents' parents. Before that, I was just living my life like I knew everything - and suddenly this bright light hit me and woke me up. That light was you. I ...
[...]
See more »

Featured in Nostalgia Critic: When Is a Movie Just a Movie? (2014) See more »

I've been a fan of Spike Jonze's films since I first saw Being John Malkovich. Although the wonderful script deserves some of the credit for making that film so great, it was immediately clear to me that Spike Jonze was a director with a fresh and imaginative perspective. His next film, the 2002 meta-comedy Adaptation, confirmed this with its dry wit and multilayered narrative. Now, after a slightly less successful (but still enjoyable) adaptation of Where The Wild Things Are, Spike Jonze has written and directed his most complete and poignant film yet, Her.

The story, taking place in a near future when people spend more time talking to their computers than they do to each other, stars Joaquin Phoenix as Theodore Twombly, a lonely man whose job is to write heartfelt personal letters for people not willing to do it themselves. Theodore happens to see an ad for a new computer operating system that is programmed with a personality, and decides to give it a shot. His new operating system Samantha, voiced by Scarlett Johansson, is not only intelligent but also charming and understanding, and she and Theo quickly fall in love.

It's understandable if that premise sounds bizarre on paper, but in execution Her is far more sweet than creepy. The film radiates warmth and intelligence, and there is a fair amount of witty humor to ensure that it never becomes too self-serious. It has an engaging style similar to that of Sofia Coppola's Lost In Translation. Like in that film, there's a certain poetic yet whimsical quality to the dialogue in Her and both the main characters are plagued by feelings of loneliness.

Beyond the romance though, Her has a lot to say about modern society's obsession with technology. The people in this futuristic vision of Los Angeles walk around talking to their computers and ignoring each other entirely, not unlike people today staring at their cell phones rather than talking to those around them. Needless to say it's not a wildly original message, but it's communicated in a unique enough way that it works.

I've seen Her twice now, and the more I think about it the more I feel that Spike Jonze has crafted the best film of 2013. Her is equally heartfelt and heartbreaking, a deeply personal and thoroughly enjoyable futuristic love story.

Q: Why did Theodore get so upset when he heard Samantha let out a sigh?
See more »
Edit