You have reached the cached page for https://pagesix.com/2021/06/17/winklevoss-twins-tyler-and-cameron-have-started-a-band/
Below is a snapshot of the Web page as it appeared on 7/30/2021 (the last time our crawler visited it). This is the version of the page that was used for ranking your search results. The page may have changed since we last cached it. To see what might have changed (without the highlights), go to the current page.
You searched for: tyler winklevoss We have highlighted matching words that appear in the page below.
Bing is not responsible for the content of this page.
Winklevoss twins Tyler and Cameron have started a band Skip to main content

Winklevoss twins Tyler and Cameron have started a band 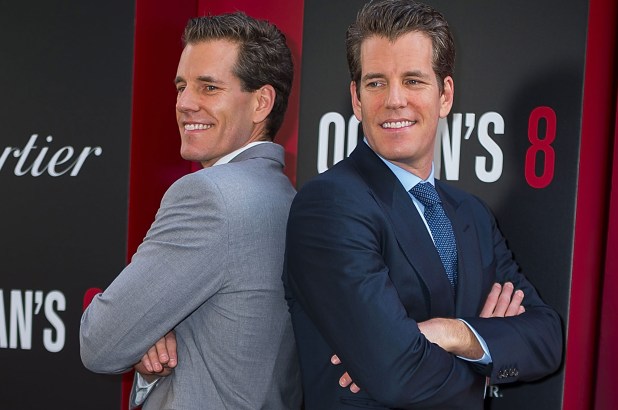 We hear that the brothers, Tyler and Cameron — best known as the Harvard grads who sued Mark Zuckerberg for allegedly stealing their idea for Facebook — have started a band with their head of security and some pals.

“Tyler sings, Cameron plays guitar,” says the source who tells us the twins have started performing for friends.

We hear the six-member group played to a dozen guests at Cameron’s NoHo loft this week, which has been outfitted with a professional stage and lighting.

Didn’t make the guest list? No worries. The source tells us the the mini show was just a dress rehearsal for next week, when the 6’5″ pair — who were played by Armie Hammer in the 2010 movie “Social Network” — have invited 200 people over to see them jam.

While we haven’t uncovered their band name, Page Six is only here to help and would be happy to make some suggestions: New Kids on the Blockchain, The Coxless Pair (as a nod to their rowing career), the Self-Righteous Brothers, Free WiVi, Plaintiff White Tees, the Coiner Sisters, the Rolling Clones, Cyndi Lawsuit, or perhaps, in homage to Hammer, the Fine Young Cannibals.

When they’re not rocking out, the brothers run Winklevoss Capital and the cyrptocurrency exchange Gemini. They reached a settlement in 2008 in their disagreement with Zuckerberg, getting $45 million in shares in the company and $20 million in cash.

Even Katy Perry can't get enough of Ben Affleck and Jennif...