You have reached the cached page for https://www.dailymail.co.uk/tvshowbiz/article-7663609/Nicki-Minaj-looks-sexy-new-video-Tusa-tying-knot-convicted-sex-offender.html
Below is a snapshot of the Web page as it appeared on 9/11/2021 (the last time our crawler visited it). This is the version of the page that was used for ranking your search results. The page may have changed since we last cached it. To see what might have changed (without the highlights), go to the current page.
You searched for: tusa - single nicki minaj censored video released 2017 movies We have highlighted matching words that appear in the page below.
Bing is not responsible for the content of this page.
Nicki Minaj appears in Tusa video after marrying sex offender | Daily Mail Online

Nicki Minaj, just weeks removed from tying the knot, looks amazing in the video for her new single Tusa, a collaboration with Karol G.

The Anaconda singer, 36, took to Instagram Thursday to announce the debut of the video, which is set in a palatial background.

Writing, 'TONIGHT 9 PM EST‼️‼️‼️‼️ #TUSA' and tagging Karol G, with a teaser of for Tusa (the phrase itself is Colombian slang describing a hybrid of anger and heartbreak when one is broken up with). 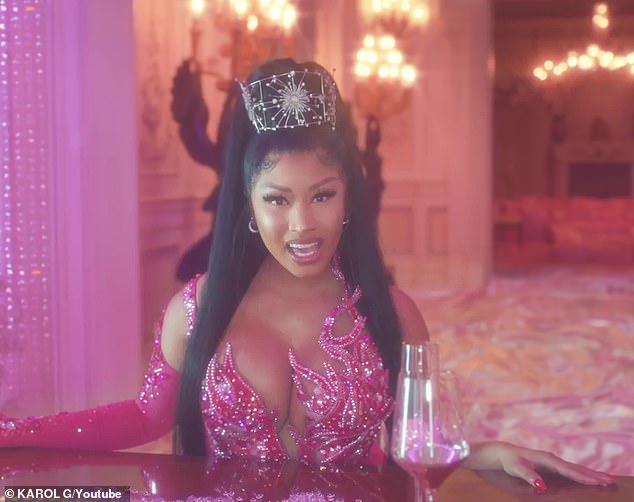 New material: Nicki Minaj , just weeks removed from tying the knot, looks amazing in the video for her new single Tusa, a collaboration with Karol G

The Super Bass artist and reggaeton singer, 28, are ensconced in the lap of luxury in the aesthetically-pleasing video, which includes bilingual lyrics from the Queens, New York native and Colombian hit-maker.

The clip itself is set in a pink tint, showing the musical artists in a luxe mansion adorned with statues and rose petals.

The new material comes just more than two months after Minaj declared she was calling it a career, tweeting September 5, 'I’ve decided to retire & have my family. I know you guys are happy now. To my fans, keep reppin me, do it til da death of me, in the box- cuz ain’t nobody checkin me.'

She later deleted the tweet and clarified the remark to The Shade Room last month, saying the retirement she refereed to in the tweet 'was talking about [her] album, meaning do I want to go back and record my fifth album?' 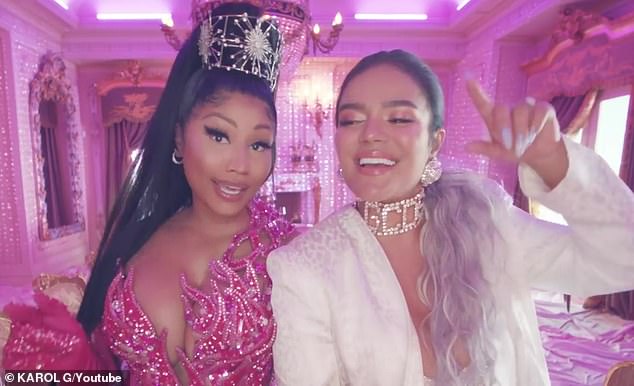 Princess style: The clip itself is set in a pink tint, showing the musical artists in a luxe mansion adorned with statues and rose petals. 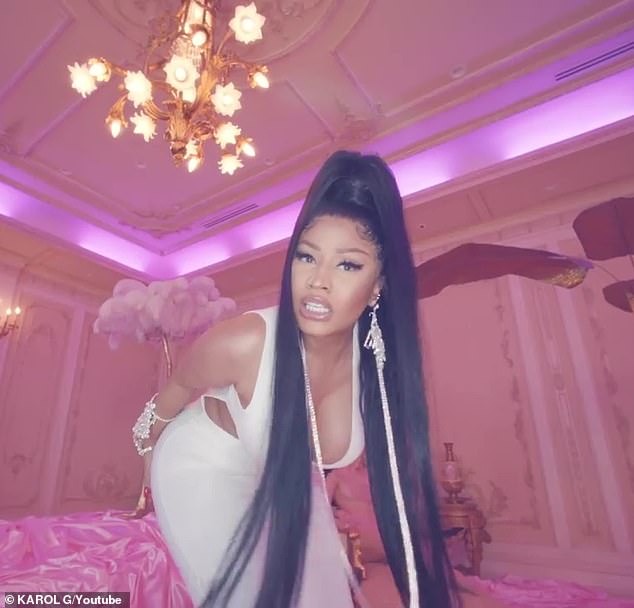 Multilingual: Nicki performs verses in Spanish in the new song 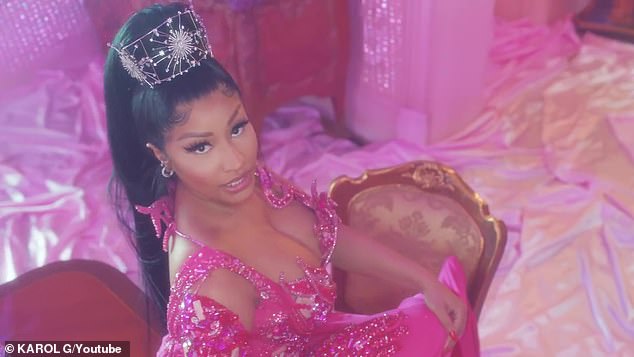 Gleaming: The star dons a tiara and sparkly magenta gown in the clip

'That's what I was talking about, but I knew that of course features—I always get asked to do features and I like features. So it was really about my fifth album.'

She said she subsequently deleted the tweet out of concern the announcement 'might have been insensitive to [her] fans.'

She's since been featured on collaborations with DaBaby (iPhone) and PnB Rock (Fendi).

Speaking about the new single, Karol G told Billboard on Wednesday that she 'still can't believe' she's working alongside the hip-hop superstar.

'In her verse, she says: "It's me and Karol G, and we let the rats talk." I died, I revived, I died and revived again until I understood Nicki Minaj had said my name in her verse,' Karol G, whose full name is Carolina Giraldo Navarro, told the publication.

Karol G said Minaj surprised her 'by recording four full lines in Spanish,' then on the day of the video, asked her to 'teach her how to sing the chorus in Spanish.' 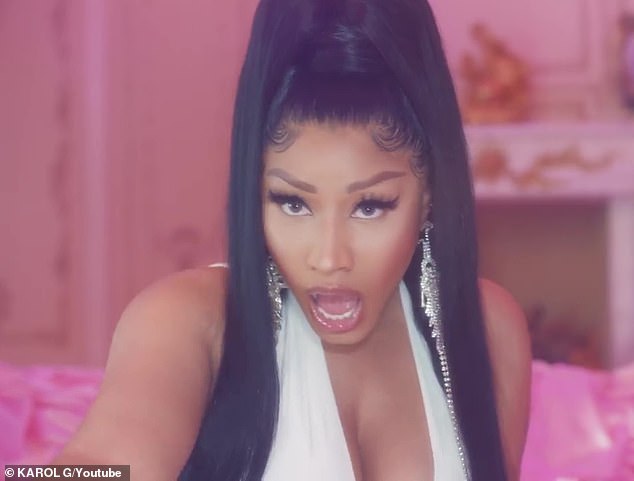 Back at it: Nicki has already collaborated with three artists since announcing her retirement on Twitter in early September 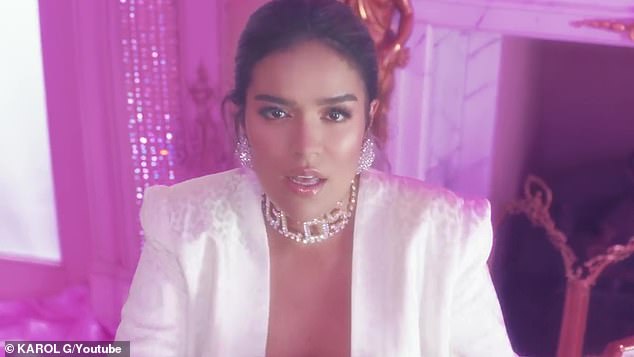 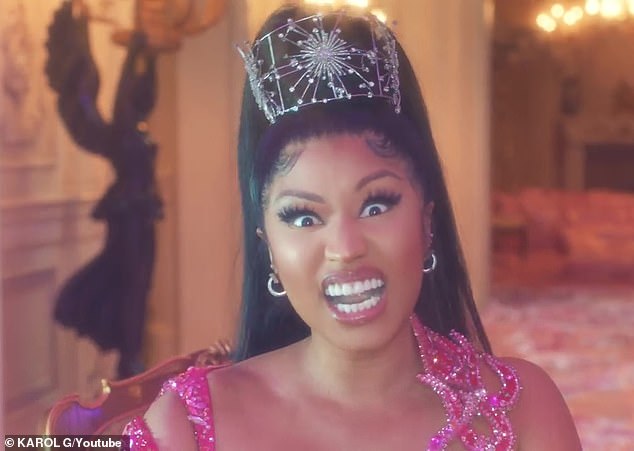 Top of her craft: The charismatic entertainer has been one of the most dominant artists of the decade

The release comes on the heels of the musical artist, whose full name is Onika Tanya Maraj, revealing last month that she had married 41-year-old Kenneth 'Zoo' Petty, a convicted sex offender.

The Anaconda singer took to Instagram writing, 'Onika Tanya Maraj-Petty 10•21•19,' as she showed off 'Bride' and 'Groom,' caps and mugs which had 'Mr.' and 'Mrs' emblazoned on them.

Minaj opened up on her Beats 1 radio show Queen Radio August 12 of the paperwork process leading up to the altar, as she and Petty had obtained a wedding license.

'We still had to pick it up and I was traveling, by the time I came back, we had to renew it again,' she said. 'From that time, you have 90 days to get married. That was about a week ago, so now I have about 80 days.' 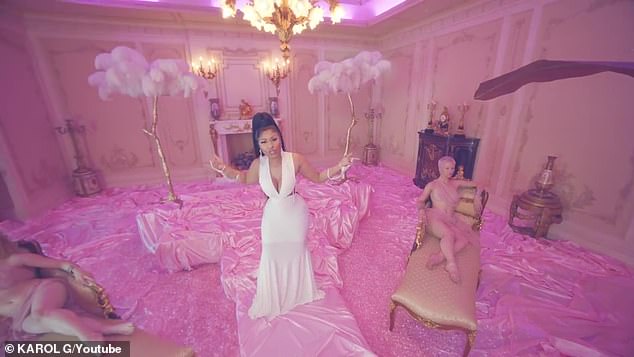 Palatial: Nicki is also seen wearing a white gown in a portion of the music video 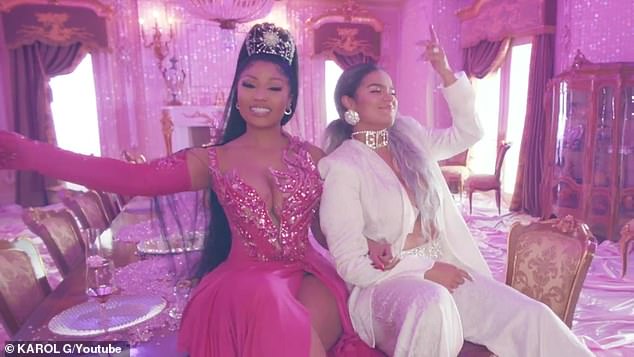 The good life: The Super Bass artist and reggaeton singer, 28, are ensconced in the lap of luxury in the aesthetically-pleasing video 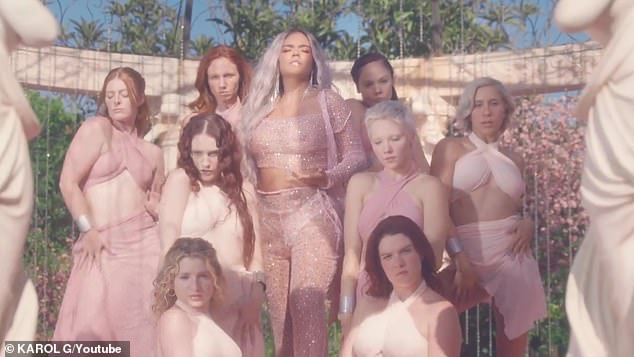 Sirens: Karol G is flanked by a number of beauties in an outdoor setting in the clip

Minaj said she was 'very happy about that because my baby makes me so happy' in reference to Perry, who she's been seeing since late last year.

It seemed Nicki was sure they would tie the knot back in March, just four months into their romance, when she referred to him as her husband.  She then changed her Twitter name to Mrs Petty in August and often refers to him as her 'Ken to her Barbie.'

In December, she wrote on Instagram: 'He want me to be his wife- his MISSIS like SIPPI NOW.'

Kenneth also appeared alongside Kenneth in a steamy scene in the video for her summer single Megatron. It includes the lyrics, 'I f*** him like I miss him/He just came out of prison,' which might have been an allusion to Perry's criminal record, as he's spent extensive time in custody. 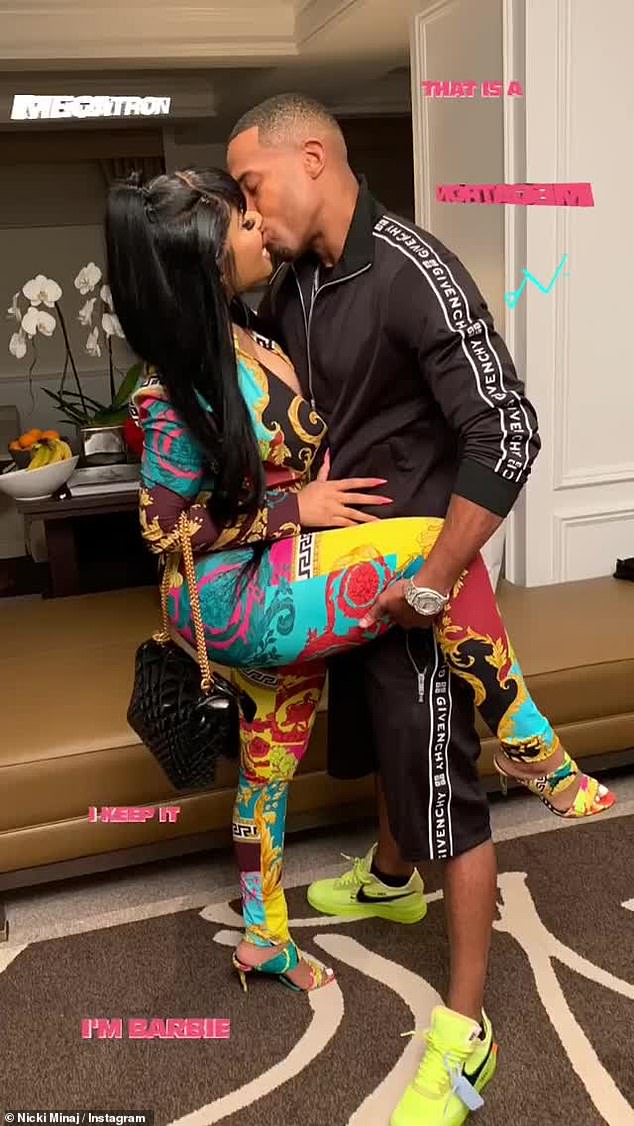 Old times: Nicki and her current beau first dated when she was only 16 and living in Queens. New York's age of consent is 17, and her boyfriend would have been around 21 at the time

When he was 16, Petty was convicted in 1995 of attempted rape in connection with a September 16, 1994 incident in which a woman said he 'placed a hard circular object' on her person as she walked down a Queens street, leading to believe he was armed, according to The Blast.

Petty's accuser said she led her to a home and into a bedroom and had sex with her by force, and threatened her with a knife when she tried to leave. He spent four years in prison in connection with the incident, and was also placed on the sex offender registry.

Nicki and Kenneth first dated when the rapper was only 16 and living in Queens. New York's age of consent is 17, and her boyfriend would have been around 21 at the time

Understandably, there was a backlash from worried and angry fans but Nicki defended Kenneth.  She wrote in the comments section that the attempted rape charge stemmed from a consensual relationship in his teens. (The comments on the post have since been disabled.)

She also posted: 'No one on social media has ever sinned. They are all perfect. 'They p*** champagne & walk on streets of gold.'

Kenneth also has a first-degree manslaughter conviction in 2006 in the fatal 2002 shooting of a man named Lamont Robinson, which he served seven years of a 10-year sentence for, according to TMZ, as he was released from custody in 2013.