You have reached the cached page for http://www.ruthlessreviews.com/43223/troop-zero/
Below is a snapshot of the Web page as it appeared on 10/19/2021 (the last time our crawler visited it). This is the version of the page that was used for ranking your search results. The page may have changed since we last cached it. To see what might have changed (without the highlights), go to the current page.
You searched for: troop zero movie review We have highlighted matching words that appear in the page below.
Bing is not responsible for the content of this page.
Troop Zero
Home / Featured Posts / Troop Zero 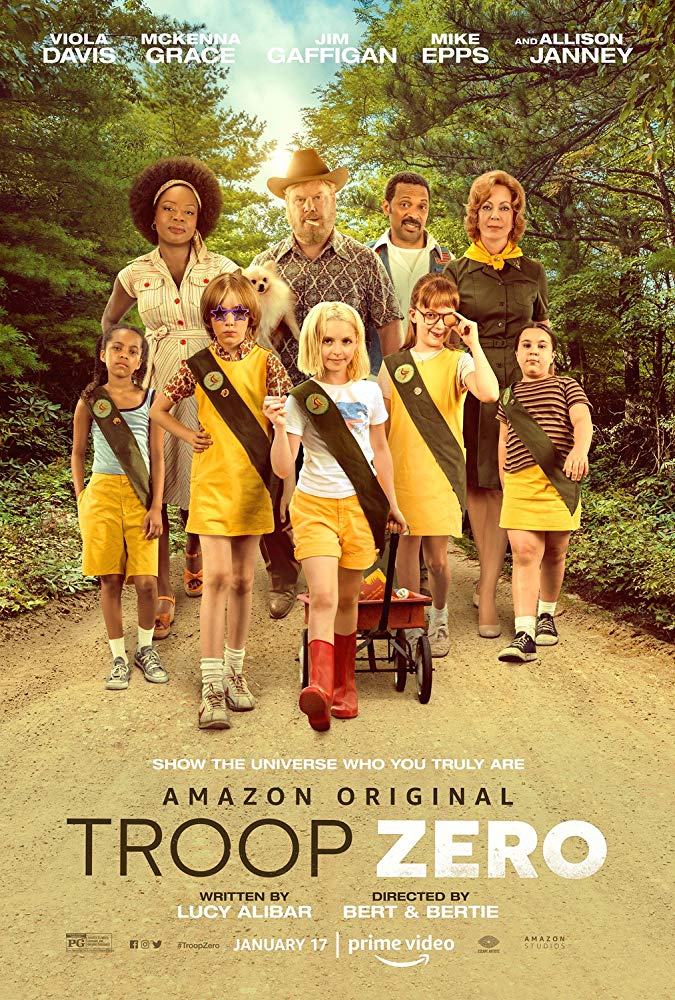 A group of kids work to have their voices heard by aliens. Seriously.

A tale of two movies.

Sitting next to each other, in the same theater on the same night, my wife and I saw two entirely different movies. I saw a heartwarming movie with adorable, courageous kids, a solid story, and a tight running time that kept the film from meandering. My wife saw a jumbled, sometimes-incoherent story, writing that failed to make her care about any of the characters, and a running time that made the movie feel rushed. Am I right? Is she right? Am I cutting this movie slack because I just watched three turds in a row (Underwater, Dolittle, Bad Boys for Life)? Is she dead inside?

(Side note: she is your editor, so delete that last bit before she reads this.)

Christmas Flint (Mckenna Grace) is a tween girl trying to cope with the death of her mother. Living alone with her father, Ramsey (Jim Gaffigan), in their trailer/law office (in rural Georgia circa 1977), Christmas spends countless hours staring at the night sky, convinced that her mother has passed on into the stars. One day, she overhears Miss Massey (Allison Janney), the school principal and local Birdie Scout leader, talking with a NASA scientist (Ash Thapliyal) about the upcoming Birdie Scout Jamboree. Whichever troop wins first place at the talent show gets to record a message on a golden record that will be attached to the Voyager Probe, soon to be launched into space. Loving space as much as she does, and desperate to send a message her mother might hear, Christmas sets forth to win the prize. Unfortunately, she is not a Birdie Scout. When she approaches the older girls in the troop, asking to join them to help them win, they respond by stuffing her into a locker.

Determined not to be denied, Christmas decides to start her own troop, enlisting four other outcasts -Joseph (Charlie Shotwell), Hell-No (Milan Ray), Smash (Johanna Colon), and Anne-Claire (Bella Higginbotham). Christmas also convinces her dad’s secretary, Miss Rayleen (Viola Davis), to be their troop leader. The group is every bunch of misfits you have ever seen throughout dozens of films, just with different names. The Mighty Ducks, the Goonies, the Bad News Bears, the oil workers in Armageddon, and, now, Troop Zero.

(SPOILER ALERT – I need to talk about some scenes that my wife and I agree on and some that we don’t.)

Between the inception of the troop and the Jamboree is when almost all of the character building happens. In order to qualify for the Jamboree, each of the kids has to earn a patch to be considered an official Birdie Scout. This second act is the part that really lost my wife and I can understand why. Miss Massey hands Miss Rayleen a nearly-empty jar with a handful of misfit patches representing very random skills. I get that this was supposed to be a metaphor for the troop, but it doesn’t make sense in any context. Along with those patches, Miss Massey issues a warning that the kids have to earn the patches honestly; they can’t just grab a patch and pretend they earned it. This makes sense until you see that nobody is actually monitoring or testing the kids besides Miss Rayleen. And the tasks they perform to earn the patches are questionable at best. They don’t really serve to build the characters so much as to serve as punchlines for some sight gags. Which, in this case, was good enough for me.

The other part that kills my wife – and this goes for me too – are movies in which bullies never get punished for assaulting other children or even questioned by authority figures. It is an incredible turn off that always takes us out of the film because it is so unbelievable. This film has two major examples of this. One is a food fight in which Miss Rayleen conveniently cannot hear despite being in the next room and which all of the blame falls squarely on the misfit troop. The second is how troop zero is treated during their performance at the Jamboree, to the point of abject humiliation while a tent-full of grownups literally do nothing to stop it. I get that some people are assholes, which is why their kids are assholes, but you not only have to suspend your disbelief during this scene to accept it; you have to beat your disbelief into submission.

Despite those flaws, the film worked for me. There was enough earnestness in the kids’ performances that I looked past the haphazard writing. Gaffigan, Janney, Davis, and Grace gave great performances, with a very solid assist from young Shotwell. I wanted them to defeat the older girls’ troop because those girls were shitheads and Miss Massey let them get away with being shitheads. Christmas’ happy-go-lucky attitude in the early part of the film, even after being bullied by several other kids, rubbed me the right way. And, I really liked the way the kids became friends and banded together by the end of the film.

Sure, rooting for the underdog here was exceptionally easy and there are clearly some backstories and character relationships that were dropped on the cutting room floor in order to keep the running time at ninety minutes. But, the underdog is Mckenna Grace. She is impossible not to root for. She emotes better than almost any actor out there and she is now three-for-three in making me sob during a film. Looking back, I probably am cutting this movie some slack. But I felt for these kids and any film that can make me cry is worth it in my book. I think it is pretty clear who is right in the instance.

Kevin is a cyber security engineer who somehow managed to become a bonafide movie critic - joining the Denver Film Critic Society in 2016 - despite being that guy that screening reps are afraid to ask "so, what'd you think of the movie?" Oh, he'll tell you alright, but it might take thousands of words to do it.