You have reached the cached page for https://www.dailymail.co.uk/tvshowbiz/article-4103492/Zendaya-discusses-survived-bad-break-year-doesn-t-reveal-man-heartache.html
Below is a snapshot of the Web page as it appeared on 11/19/2021 (the last time our crawler visited it). This is the version of the page that was used for ranking your search results. The page may have changed since we last cached it. To see what might have changed (without the highlights), go to the current page.
You searched for: trevor jackson and zendaya break up We have highlighted matching words that appear in the page below.
Bing is not responsible for the content of this page.
Zendaya discusses how she survived a 'bad' break-up last year | Daily Mail Online

Zendaya discusses how she survived a 'bad' break-up last year... but doesn't reveal the man behind her heartache

By Bobbie Whiteman For Dailymail.com

And she took to her app on Monday to share the tips she used to get over a failed romance last year.

The beautiful 20-year-old did not reveal the identity of the man who broke her heart. 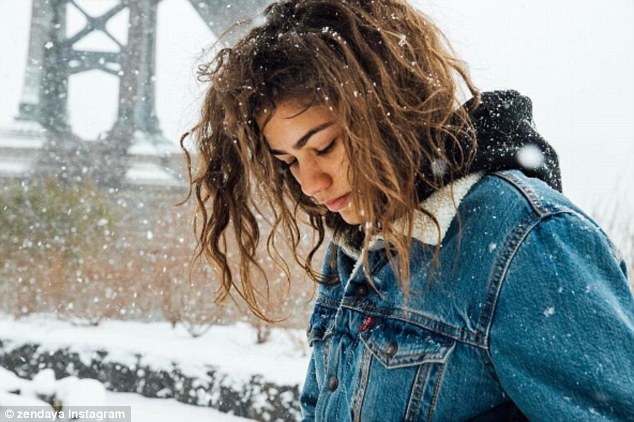 White out: Zendaya shared snaps of herself enjoying the snow in New York's Manhattan on Monday as she took to her app to reveal how she got over a failed romance last year

But the singer-actress, who also posted a slew of snaps of herself enjoying the snow in New York, made it perfectly clear she's over him in her app entry.

'Y'all know I'm not shy about telling you I went through a bad breakup last year,' Zendaya wrote. 'I'm hella over that but trust, it wasn't easy. Here's how I got through it...

'I started forcing myself to have a lot more fun. I tried new things - going out and just doing more stuff. A healthy relationship does not mean you need to be with that person 24/7.'

The KC Undercover star continued: 'I got rid of old text messages, pictures and their clothing I still had. You don't hang on to old Band-Aids. Throw that in the trash! 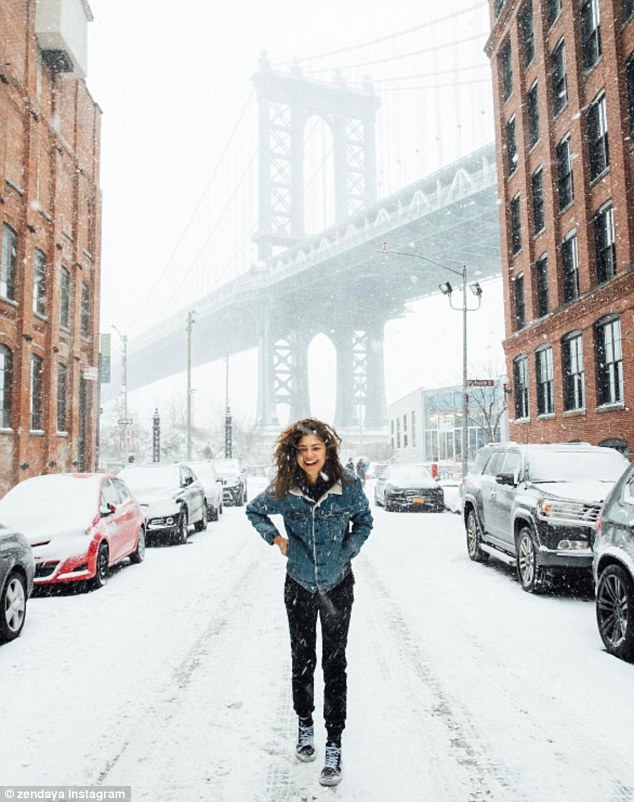 One tip for healing a broken heart: 'I forced myself to have a lot more fun!' And she appeared to be doing that in this shot, captioned,  'I'm about to post a gazillion pictures of a very happy me living my life in the snow...sorry in advance'

Layer up in a classic Levi's denim jacket like Zendaya 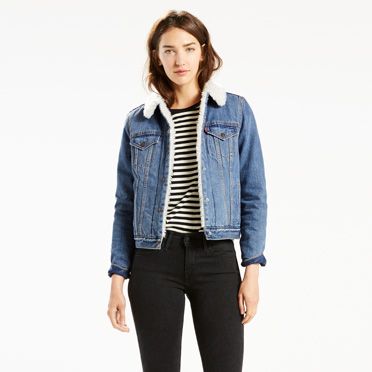 They may love their designer labels, but the celebrities do dressed down like the best of us and no one loves a denim jacket like boho babe Zendaya.

But asides from edgy designer duds from Fausto Puglisi or Balmain, Zendaya is still a sucker for a denim classic and this denim trucker jacket by Levi's is about as classic as you can get. If it were a classic American dessert it would be apple pie!

So we reckon it's time to update your denim jacket for the new season. Since it's snowing, this cuddle "sherpa" style one has extra warmth. Click right to copy Zendaya and buy her jacket from Levi's directly for under $100. Otherwise do it in denim on a more luxe scale with Isabel Marant, Topshop, Paige or Mother.

DailyMail.com may earn commission on sales from these product links
...NOW GET ONE LIKE IT

'You have to get rid of everything associated with them. It's best to get rid of their number. Or if you can't quite let go, at least change the title of their name in your phone.'

Zendaya, whose full name is Zendaya Coleman, didn't grass up the man who dumped her but she has been close to actor and singer-songwriter Trevor Jackson.

She and the 20-year-old are longtime besties who were constantly rumoured to be dating. 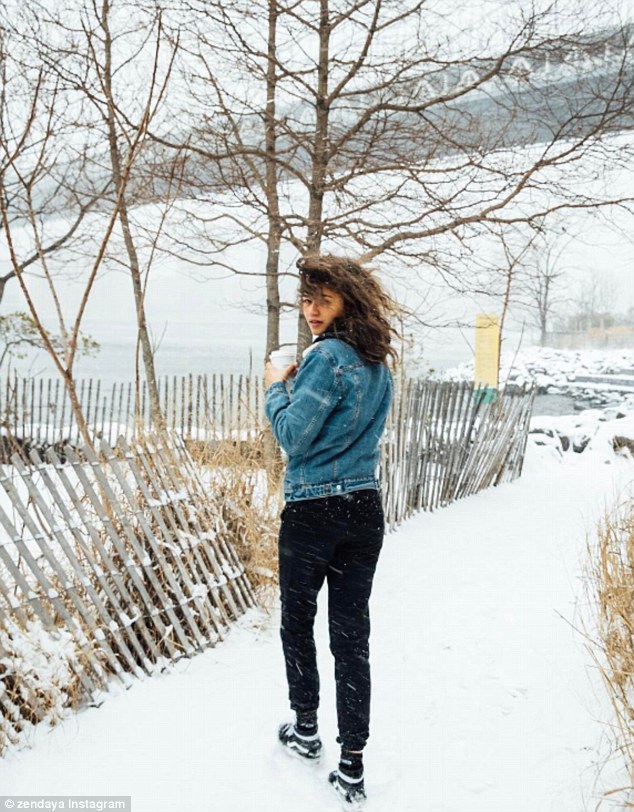 Freeze them out: The 20-year-old's advice continued,  'I got rid of old text messages, pictures and their clothing I still had. You don't hang on to old Band-Aids. Throw that in the trash!'

The former Disney star was also linked to NFL star Odell Beckham Jr, who is the wide receiver for the New York Giants.

Meanwhile, Zendaya has a busy 2017 lined up that doesn't leave her much time for dating.

Aside from K.C. Undercover, she is appearing in Spider-Man: Homecoming, due out on July 17.

She refused to be drawn about the storyline when she appeared on Good Morning America, last month. 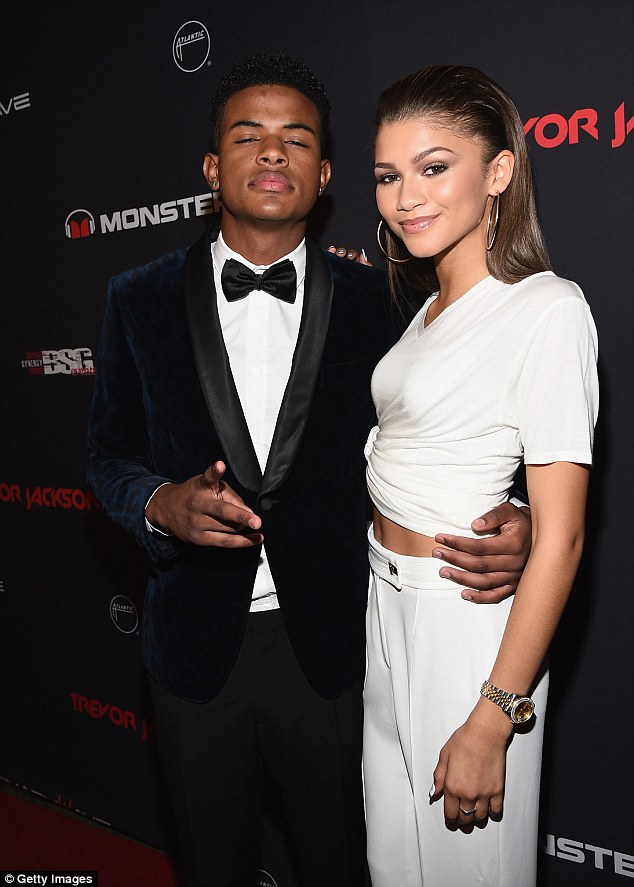 Longtime besties: Zandaya didn't reveal who broke her heart, but she's been romantically linked to her pal, actor Trevor Jackson, seen here at his 18th birthday party in 2014

'I can't say anything because I'm not going to be that person who gets into trouble,' she said, laughing. 'But I can say it's going to be a lotta lotta fun.'

She is also co-starring in biopic The Greatest Showman with Hugh Jackman as circus entrepreneur P.T. Barnum.

And Zendaya has added fashion designer to her long list of accomplishments, bowing her new line, Daya By Zendaya, before Christmas. 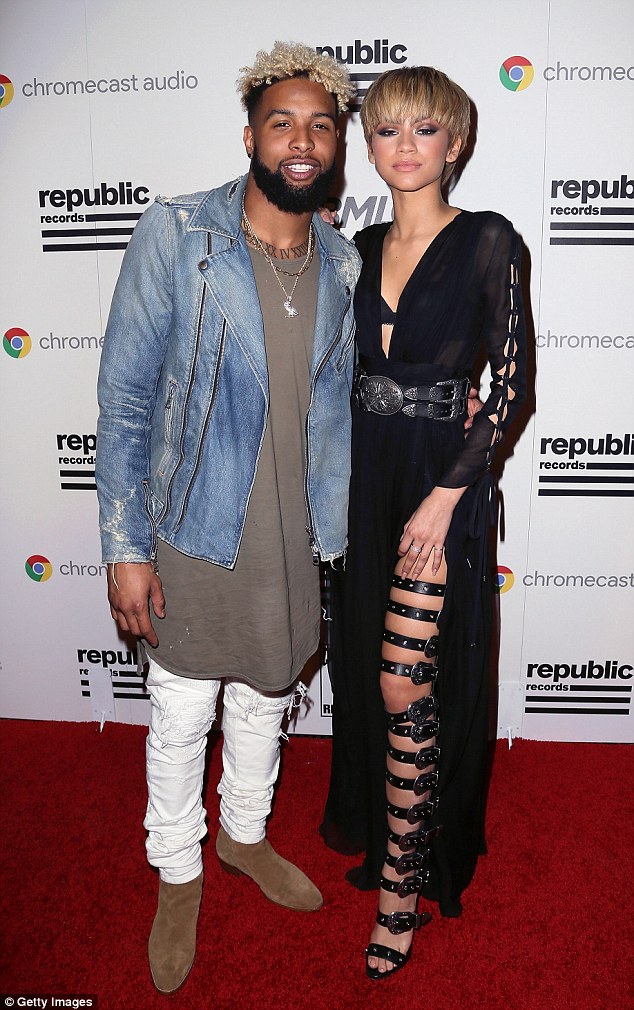 Out and about: The former Disney star was also linked to NFL star Odell Beckham Jr., the New York Giants wide receiver. The couple are seen at an event in LA in Febrary

Zendaya discusses how she survived a 'bad' break-up last year