You have reached the cached page for https://www.dailymail.co.uk/news/article-3005200/Naked-Spring-Break-girl-pictured-surrounded-men-identified-police-minor-insists-safe-didn-t-know-picture-taken.html
Below is a snapshot of the Web page as it appeared on 10/15/2021 (the last time our crawler visited it). This is the version of the page that was used for ranking your search results. The page may have changed since we last cached it. To see what might have changed (without the highlights), go to the current page.
You searched for: togetherness party time clip art spring forward We have highlighted matching words that appear in the page below.
Bing is not responsible for the content of this page.
Naked Spring Break girl pictured surrounded by men identified by police as a minor | Daily Mail Online

A girl who was pictured naked surrounded by a group of men during spring break has been identified as a 17-year-old.

The image which surfaced online on March 11 caused concern among law enforcement who feared she could be danger.

But when the girl, who has not been identified, returned home from Panama Beach and saw the snap online, she came forward to the Bay County Sheriff's Office and insisted she was safe.

According to officers she told them the interaction between the crowd was consensual and and she didn't realize her picture was being taken. 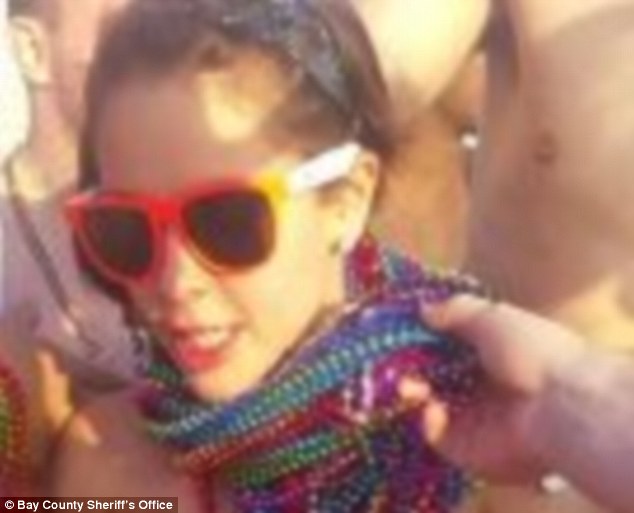 Police in Bay County, Florida were searching for a young woman on Spring Break earlier this month who caused concern after being pictured naked wearing only sunglasses and strings of colorful beads while surrounded by men

It has also been revealed she wasn't enrolled in a college.

Sheriff Frank McKeithen releases a statement on the department's website on Friday evening saying:  'The Bay County Sheriff’s Office has identified the female in a photo the agency released on March 17, 2015.

'The photo was posted on Twitter on March 11, 2015, when it came to the attention of law enforcement who became concerned for her safety. The female was on the sand on what was believed to be Panama City Beach.

'She was surrounded by a crowd of men in bathing suits. She was wearing no clothing and appeared to be underage.

The Bay County Sheriff’s Office (BCSO) provided a breakdown of criminal activity between March 5 - 15 this year, with three weeks of Spring Break still to go:

'The female in the photo became aware through the media that her identity was sought, and contacted the BCSO today and spoke with investigators.

'The BCSO requested law enforcement in the same city the girl lives in to make contact with her.

'They verified her claim to be the girl in the photo. She lives in the southern part of the United States and told investigators she visited Panama City Beach for spring break, although she does not attend college.

'She is seventeen years of age and although she stated her behavior and interaction with the crowd was consensual and she is safe, she did not realize that someone was taking her picture.

Sheriff McKethithen told the Daily Mail Online earlier on Friday that the photos had been deeply concerning to law enforcement because of how young the girl looked, and their main priority was to find out if she was safe.

'She isn't in trouble,' Sheriff McKeithen said. 'We want to be proactive about her safety.'

An investigation is still underway into the photographs, but the extent of that is not yet known.

Bay County officials were alerted to the photos after they were posted to Twitter on March 11.

In one of the pictures, the young woman was bent over and dancing naked at the water's edge on a beach in the Gulf of Mexico.

In a separate shot, she appeared to be trying to cover her body while a group of men gathered around her.

In another picture, the scene was more aggressive. The girl appeared to be trying to escape the frame but was surrounded by shirtless men.

One of the men was grabbing the necklaces at her throat.

Panama City Beach in Bay County is the country's top destination for students on Spring Break.

Sheriff McKeithen told Daily Mail Online on Friday that his officers, along with the Panama City Beach Police, face an overwhelming wave of criminal activity during the five weeks of Spring Break, when their community swells from 12,000 people to an estimated 100-300,000.

'We have a mess here... this is not the traditional Spring Break of the past,' the sheriff said.

'The kids themselves are posting videos of them having sex on the beach and getting into fights.'

He called Spring Break an 'emotional roller coaster' both for the students who end up victims of violence and sexual assault and for his officers, who work double shifts to cope with the influx.

'The majority of sexual assaults are not reported, because they feel shame, are embarrassed, have never likely been this intoxicated before and are far from home,' the police chief said.

'But our message is this - no matter how intoxicated you are, if you are violated, we take that very seriously.'

Although the sheriff offered no exact figures on the cost of policing Spring Break, he said that the $150,000 given in assistance by the Tourist Development Council 'barely scratched the surface'. 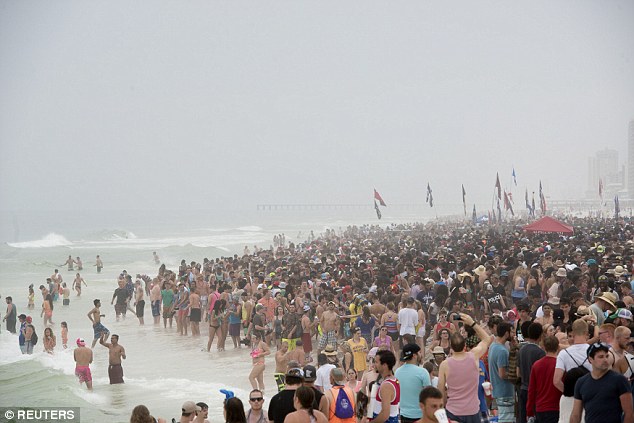 The crowd packed the beach during Spring Break festivities in Panama City Beach, Florida on March 12. Bay County authorities believe that the naked, young woman was on a beach somewhere in this area

Along with hundreds of thousands of drunk, college kids pouring into the town, there was also the dangerous elements that a group this large, with money to burn and wanting to experiment, attraced.

'Build it and they will come,' the sheriff said.

Among 22 people arrested at a local bar this weekend in a narcotics sting, was a 39-year-old man from Nashville, Tennessee, who was selling the synthetic party drug, known as 'molly'.

Heroin and prescription drugs have also been seized.

Weapons were also a growing problem - arrests had uncovered a Glock and an AK-47 during Spring Break.

McKeithen said earlier this week that the number of incidents so far this year showed the changes designed to tone down Spring Break haven't worked. These included a 2am closing time for alcohol sales.

Sheriff McKeithen said: 'We can't ''police it'' away, that's not going to fix the problem. We are doing the best we can. At some point, someone has to decide whether this is what we want or don't want.

'I am trying to keep people and our officers safe.'