You have reached the cached page for https://thefilmstage.com/new-to-streaming-siberia-luca-sweet-thing-les-notres-more/
Below is a snapshot of the Web page as it appeared on 9/3/2021 (the last time our crawler visited it). This is the version of the page that was used for ranking your search results. The page may have changed since we last cached it. To see what might have changed (without the highlights), go to the current page.
You searched for: togetherness party time clip art images We have highlighted matching words that appear in the page below.
Bing is not responsible for the content of this page.
New to Streaming: Siberia, Luca, Sweet Thing, Les nôtres & More

Each week we highlight the noteworthy titles that have recently hit streaming platforms in the United States. Check out this week’s selections below and past round-ups here.

It makes no sense. The night before saw Alice Ferrand’s (Emilie Piponnier) husband François (Martin Swabey) going out of his way to passionately make-out with her in front of their friends at a dinner party and now he won’t answer her calls. Despite his running out of the house earlier than usual without any explanation, however, there’s nothing to make her think something is wrong until a trip to the drugstore exposes a freeze on their finances. One credit card won’t work. Then another. The ATM won’t accept her sign-in and François still isn’t picking up his phone. Alice has no other option but to set a meeting with the bank and figure out what’s happening on her own. It’s there that she learns the money is gone. – Jared M. (full review)

Where to Stream: OVID.tv

Courtney Stephens and Pacho Velez’s documentary The American Sector announces its intentions from the very beginning, starting with its first three juxtaposed images. The first is of what appears to be a nondescript block of concrete, with splattered paint and a caterpillar crawling upon it; the second reveals the block to be a segment of the Berlin Wall in a large forest–specified in the chyrons as unincorporated land in Western Pennsylvania–with the sound of chainsaws off-camera; the third suddenly jumps to a much different, more sterile setting: the Hilton Hotel in Dallas, Texas, where two sections of the Wall have been installed. Aside from brief interviews, a few instances of archival footage, and an epigraph from “The Monument” by poet Elizabeth Bishop, this deliberate foregrounding of incongruity in both specific and relative location created by editing is all the contextualization that the documentary provides, or needs. – Ryan S. (full review)

Where to Stream: Metrograph’s Virtual Cinema

It is hard to think of a recent horror film––or a film of any genre, really––in which the main character is tasked with a job as original and ingenious as Enid Baines, the protagonist of Prano Bailey-Bond’s riveting Censor. She is, yes, the titular censor. It is 1980s England, the time of “video nasties” that drew parental consternation and tabloid outrage. These were the low-budget, ultra-violent VHS cassettes that earned their own category in the collective consciousness. Not all were UK productions––I Spit On Your Grave and Abel Ferrara’s Driller Killer made the list. In Censor, however, the nasties are homegrown, in more ways than one. – Chris S. (full review)

Where to Stream: VOD

The Sundance and SXSW Jury Award-winning Don’t Go Tellin’ Your Momma expands Topaz Jones’ hip-hop record of the same name into a standalone short, which we present in an exclusive weeklong run. The film—made by Jones with the New York filmmaking duo rubberband, Simon Davis and Jason Sondock—is a contemporary update of the Black ABCs, a set of reading flashcards created in 1970s Chicago that were a landmark for Black representation. With dreamy interludes shot by BlacKkKlansman cinematographer Chayse Irvin, the genre-blurring piece illuminates links between racial consciousness, community, and education.

Where to Stream: Le Cinéma Club

Cinematic representations of passion usually involve hot color schemes, sweaty images and fiery emotions, symbols of riveting and uncontrollable desire. In his 1981 masterpiece Francisca, a sprawling adaptation of Agustina Bessa-Luís’s novel Fanny Owen—itself based on true events—master filmmaker Manoel de Oliveira devilishly internalizes these melodramatic tropes, draping them in the opulent textures, swirling mustaches, and snooty stubbornness of 1850s high-society Portugal. Its key characters speak of love and lust, but each remains more beholden to the rigorous expectations of social protocols than anything else. – Glenn H. (full review)

Where to Stream: The Criterion Channel

With this year’s French Open recently concluding, it’s the opportune time to watch one of cinema’s greatest sports documentaries. Capturing the annual tennis event 40 years ago, Muhammed Ali, the Greatest director William Klein’s The French takes an intimate look at the 1981 French Open with John McEnroe, Chris Evert, Yannick Noah, Arthur Ashe, Martina Navratilova, and Björn Borg. Wes Anderson, who is presenting the film (and has one of the most memorable bits of tennis in one of his own films, The Royal Tenenbaums), said, “For me, this film encapsulates everything I loved and love about the tennis of that moment; and in the hands of the great and singular William Klein, it is at once a gripping sports page, a fascinating piece of reportage, and a work of art.”

Where to Stream: Metrograph’s Virtual Cinema

The wonder of childhood is in the newness and possibility of everything. Without the biases and preconceptions we build up as we grow, the world of a child is one of boundless potential. Everything is a mystery, and in the unraveling of those mysteries one becomes a grand adventurer, a noble explorer. The very basic tenets of the world, what as adults we might consider to be almost genetic knowledge, to a child are grand revelations that open many more doors of inquiry and insight and belief. Not only that, but every friend you make is the truest and most amazing person in the world, and every enemy is the most evil and cunning. There is an operatic grandiosity to childhood––one that only increases if you happen to be a sea monster masquerading as a human in order to win a vespa to escape your overbearing parents. While that may not sound like a wholly universal or relatable circumstance, it is in fact the premise of Luca, the newest film from Pixar Animation Studios. – Brian R. (full review)

Where to Stream: Disney+

Watch an exclusive clip above.

It takes a village. That’s what close, tight-knit communities like Sainte-Adeline, Quebec, say when asked how they can confront and conquer tough circumstances. With that sense of togetherness, however, comes a cliquish sensibility of superiority. They survive because they have each other. They survive because they’re vigilant and always watching to see where and when their help is required to pick someone up. It’s how they got through a horrible construction-site tragedy years prior that claimed too many friends and families’ lives. They picked up the slack, opened their homes, and came out the other side. It’s also how they vindictively turned thirteen-year-old Magalie Jodoin’s (Emilie Bierre) life upside-down upon discovering she was too far along with an unplanned pregnancy to terminate. – Jared M. (full review)

Where to Stream: Virtual Cinemas

Carlos Reygadas’ films are often semi-autobiographical, typically exploring intimacy and suffering through metaphysical and philosophical lenses that are by turns cosmic and illusory. His latest film, Our Time, is no different. Truthfully, it might be his most personal film to date, painfully honest in its portrayal of a disintegrating marriage, with husband and wife played by Reygadas himself and his wife, Natalia López. Although the film recalls the marital infidelity of Reygadas’ Silent Light, paralleling the cosmos and seemingly boundless Mexican skyline with extramarital affairs and phlegmatic interiorities, Our Time pushes the envelope with its metatextual angle. Some have likened the film to couple’s therapy, with implicit disdain for the self-indulgence such a premise can have. However, this comes across as a critical misreading. The film is not a form of justification or apologia; neither vindication nor denunciation. Our Time is a personal testament, not to the character of Reygadas or López, but rather the complexities of matrimony when love breaks down beyond spiritual repair. – Kyle P.

Where to Stream: OVID.tv

The Reason I Jump (Jerry Rothwell)

An immersive documentary, Jerry Rothwell’s The Reason I Jump places us internally within the mind of the nonverbal autistic, allowing empathy to flow in. Inspired by Naomi Higashida’s groundbreaking book, written when the author was just 13, the film is a transcendent experience often operating in a poetic mode as it explores the complexities of understanding how the universe is ordered. The text, adapted into English by David Mitchell and K.A. Yoshida, unpacks the process of perception of its author, including how he deduces it is raining. – John F. (full review)

Where to Stream: Netflix

In Abel Ferrara’s films over the last 10 years, the apocalypse has been looming, waiting to infect everyone in its vicinity with darkness, death, and devastation. In Tommaso, there is doom impending even in an otherwise stable family unit, paralyzing its protagonist with anxieties and sufferings so intense that there’s no chance of a happy ending. In Pasolini, the apocalypse is made further personal. The inevitable death of the Italian filmmaker is built towards with cosmic sadness, the unfinished work of his being brought to life by Ferrara like half-remembered dreams before his violent murder. Within his masterpiece 4:44 Last Day on Earth, the apocalypse is literal, two people desperately trying to cling onto each other before time itself runs out in front of their eyes. All of Ferrara’s pursuits of understanding death and the horrors of it are present in his latest feature film Siberia, one that takes the dreamlike moments of Pasolini and expands them into a fragmented, labyrinthic nightmare. – Logan K. (full review)

Where to Stream: VOD

Alexandre Rockwell’s Sweet Thing could be pulled from any era. Shot in striking 16mm black-and-white, the coming-of-age film—Rockwell’s first feature since 2013—is an intimate story about childhood, connection, freedom, and the stories we tell ourselves to survive. Starring Rockwell’s own children Lana and Nico as, respectively, Billie and Nico, Sweet Thing keeps its lens on two children maturing before they should and forced into situations of adulthood. – Michael F. (full review)

Where to Stream: Virtual Cinemas

With the idea that most admirers of the works of either Truman Capote and Tennessee Williams know enough about each iconic American writer itself, Lisa Immordino Vreeland eschews biographical documentary conventions with her latest work, a dual portrait that finds the commonalities and differences between the outlook and experiences of the artists. Relying almost entirely on later-in-life archival material accompanied by new voice-over workfrom Jim Parsons (Capote) and Zachary Quinto (Williams), Truman & Tennessee: An Intimate Conversation is a curious experiment that most intrigues when it delves into the bonds, or lack thereof, when it comes to sexuality and friendship. Although the form is a bit wobbly, to hear two of the most influential gay men in America share life’s observations in their own words makes for ideal viewing this Pride month. – Jordan R.

Where to Stream: Kino Marquee

The Squid & the Whale 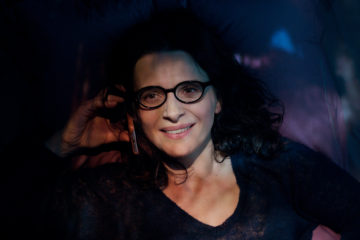 Who You Think I Am Review: Juliette Binoche Highlight Reel Doubles as Effective Thriller 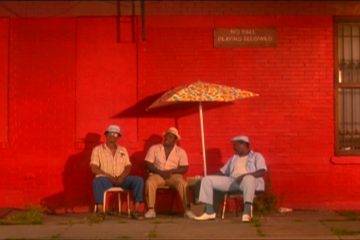 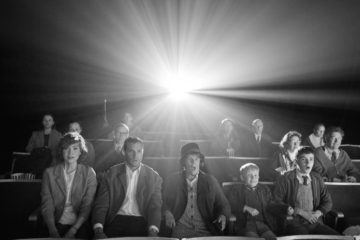 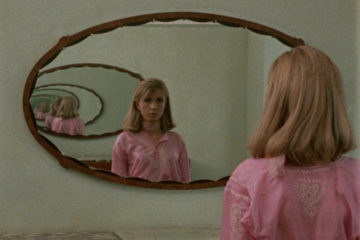 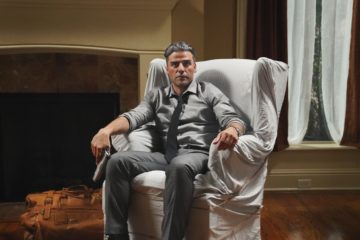