You have reached the cached page for https://freebasstranscriptions.com/tag/paul-jackson/
Below is a snapshot of the Web page as it appeared on 1/16/2022 (the last time our crawler visited it). This is the version of the page that was used for ranking your search results. The page may have changed since we last cached it. To see what might have changed (without the highlights), go to the current page.
You searched for: thrust paul jackson pdf free We have highlighted matching words that appear in the page below.
Bing is not responsible for the content of this page.
paul jackson Archives - Free Bass Transcriptions

GOTW 3 Groove of the Week

Tom Kenrick
No Comments on Groove of the Week #42: Herbie Hancock – ‘Palm Grease’

Everyone knows Herbie’s classic synth bass line on ‘Chameleon’, and plenty of guys can tear through ‘Actual Proof’ without breaking a sweat but for me, the real gem in the…

Everyone knows Herbie’s classic synth bass line on ‘Chameleon’, and plenty of guys can tear through ‘Actual Proof’ without breaking a sweat but for me, the real gem in the Head Hunters’ catalogue of grooves has always ‘Palm Grease’ (from 1974’s Thrust).

As soon as you hear Mike Clarke’s drum groove kick in, you know something serious is going to happen.

Paul Jackson’s bass line on ‘Palm Grease’ is a masterclass in how to develop and expand a groove, using just enough variation to keep the listener guessing while still retaining a ‘common thread’. After the initial statement, he begins to embellish the part – notice how the line unfolds with each successive iteration: 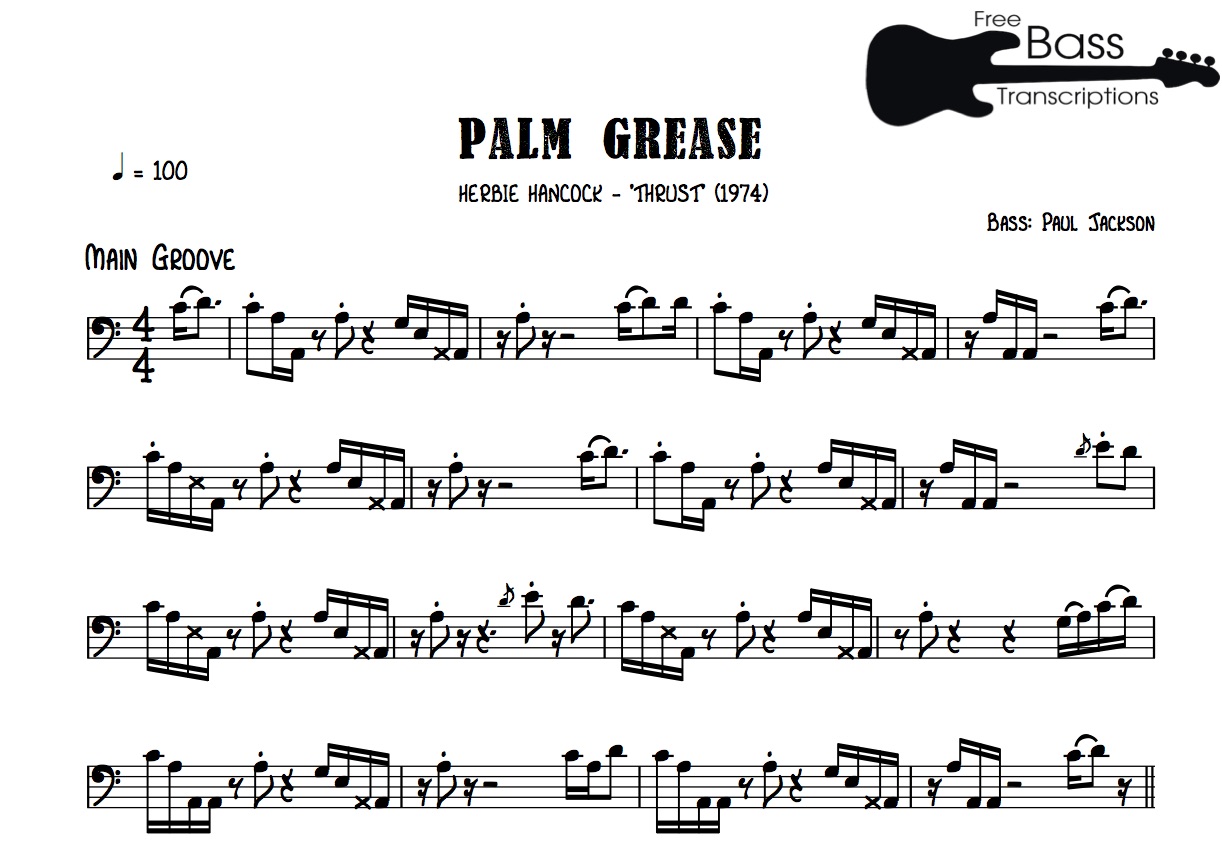 Rhythmic variation is only part of the equation; one of the most distinctive qualities of Paul Jackson’s playing is his mastery of articulation. The elusive essence of groove comes from how each note is played – check out how each note in every phrase is carefully sculpted for maximum impact.

Control of the left hand is key to being able to freely switch between different articulations; slides, hammer-ons and – most importantly – the length of each note all put a different sonic stamp on each phrase.

As an aside, I found this one of the most difficult grooves in this series – although other posts in the Groove Of The Week archive have required a greater level of conventional ‘chops’, Paul Jackson’s time feel on ‘Palm Grease’ was the hardest thing to recreate.

The heir to the (greasy) throne

One contemporary bassist who has clearly taken a lot from Paul Jackson’s greasy grooves is Me’shell N’degeocello*, who has been (and continues to be) a massive influence on my playing.

I unknowingly first heard Me’Shell on a tune by Joshua Redman called ‘Greasy G’ (from the 2005 Momentum album) and was absolutely floored by her time feel:

With both of these grooves, it’s the almost undefinable quality of feel that sets the head nodding or the foot tapping; it’s not necessarily what you play but how you play it that counts.

*If you’re not familiar with Me’Shell, get hold of Plantation Lullabies and Peace Beyond Passion for some serious groove education.

END_OF_DOCUMENT_TOKEN_TO_BE_REPLACED
No Comments on Groove of the Week #42: Herbie Hancock – ‘Palm Grease’

The bass, the coffee bean, the domesticated feline 🎸☕️🐈

Today is your last chance to get over 30% off the

Coming to the end of a blissful few months of list

Had a week off from gigs/talking at people about m

One thing I’ve discovered from spending the past

Anyone else change strings so infrequently that th

‘Stop taking pictures of me and do some bloody p

Type on the field below and hit Enter/Return to search