You have reached the cached page for https://www.amazon.com/Thirteen-Ghosts-Tony-Shalhoub/dp/B00005UQ9W
Below is a snapshot of the Web page as it appeared on 1/11/2021 (the last time our crawler visited it). This is the version of the page that was used for ranking your search results. The page may have changed since we last cached it. To see what might have changed (without the highlights), go to the current page.
You searched for: thir13en ghosts game We have highlighted matching words that appear in the page below.
Bing is not responsible for the content of this page.
Amazon.com: Thirteen Ghosts: Tony Shalhoub, Embeth Davidtz, Matthew Lillard, Shannon Elizabeth, Alec Roberts, JR Bourne, Rah Digga, F. Murray Abraham, Matthew Harrison, Jacob Rupp, Mike Crestejo, Aubrey Culp, Charles Andre, Mikhael Speidel, Daniel Wesley, Laura Mennell, Kathryn Anderson, Craig Olejnik, Shawna Loyer, Xantha Radley, Steve Beck: Movies & TV 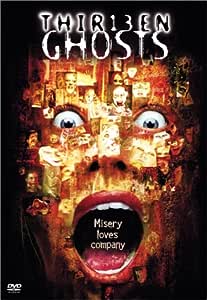 Save with Used - Good
$6.94
FREE Shipping on orders over $25.00 shipped by Amazon.
Arrives: Sunday, Jan 17
Ships from: Amazon
Sold by: Benjamins Bookshelf

A family inherits an elegant steel-and-glass mansion from a deceased relative. The catch is that along with the house comes a slew of ghosts that can be seen only through special goggles.

4.6 out of 5 stars
4.6 out of 5
14,107 global ratings
How are ratings calculated?
To calculate the overall star rating and percentage breakdown by star, we don’t use a simple average. Instead, our system considers things like how recent a review is and if the reviewer bought the item on Amazon. It also analyzes reviews to verify trustworthiness.

Niani Shelton
5.0 out of 5 stars one of the most underrated horror movies ever!!
Reviewed in the United States on January 24, 2018
Verified Purchase
This has been one of my favorite movies since I was a child. For reasons unbeknownst to me, it's really hard to find ANYWHERE! So once, I found it here, I was stoked! I ordered it immediately, and it came quickly, and was in great condition!! I love ordering movies from Amazon, way better deals and waaaaaaay better selection. This movie also has a pretty dope special feature, that explains what happened to all of the ghosts. Really cool, if you're into this movie like I am!
Read more
57 people found this helpful
Helpful
Report abuse

Mark N.
5.0 out of 5 stars THIR13EN GHOSTS is imaginative and interesting and needs to be part of your collection !
Reviewed in the United States on March 11, 2018
Verified Purchase
This movie is imaginative and interesting. It has a fairly simple plot and a complicated execution. It's about a widower who learns that his uncle, who has recently passed away, has left him an inheritance of a very high-tech house set in the woods. The widower, his family and their nanny move into their new home which is filled with beautiful belongings and gadgets from around the world.They soon discover its not a house but a complex, fine tuned machine with latin phrases etched in walls of glass that , on a timer, move and shift, trapping the residents in rooms that each hold one of the thirteen ghosts that they see only with special glasses. The residents then try avoid them at all costs. It's a high-tech ghost story unlike most anything you've ever watched. If there are any weak spots in this movie ...you'll forget them soon after they present themselves. However there is a measure of violence, blood and gore so use discretion when watching it with others. It's one of those rare sleeper hits that needs to be part of your collection. I definitely recommend this movie !
Read more
17 people found this helpful
Helpful
Report abuse

Amazon Customer
3.0 out of 5 stars A great remake
Reviewed in the United States on July 26, 2018
Verified Purchase
This is a great "B" film. It's fun, and I love F. Murray Abraham and Tony Shalhoub in this. This is almost a trilogy for me of remade horror films starring pretty famous actors (13 Ghosts, House on Haunted Hill & Ghost Ship). Matthew Lillard is the best here that he's ever been. It also contains the best scene showing the death of a lawyer ever. The ghosts have a rich history, which unfortunately wasn't shared in the film. There's not a lot of films these days containing Shannon Elizabeth, which is a shame. She isn't given a lot to do here other than give the main character motivation, but she's always enjoyable on screen. I think this is a suitable remake of the original Vincent Price film.
Read more
11 people found this helpful
Helpful
Report abuse

80sRockerChick
4.0 out of 5 stars A guilty pleasure!!!
Reviewed in the United States on November 17, 2019
Verified Purchase
It's not the scariest, nor gory for a "horror" movie but it is alot of fun even when there's some lame writing and you really hope the young son gets killed asap! 😉 He's super annoying, talks like he's 2yrs old when I think he's like 7, doesn't listen to his dad, sister or nanny/bad housekeeper SO he deserves to die in a horror movie, am I right or not?! I mean he does meets all the criteria🤪 Anyhoo, its become a guilty pleasure after watching it over the years. I went from not liking it very much (2 Stars back then) when I saw it in the theater to MANY years later, I do really enjoy it!
Read more
3 people found this helpful
Helpful
Report abuse

Brian Gagnon
5.0 out of 5 stars Decent Yet Wirthwhile Second Film From The Production Company Of House On Haunted Hill
Reviewed in the United States on September 7, 2014
Verified Purchase
When it comes to this film, some people find it decent. Others, like Roger Ebert, simply loathed it. I, on the other hand, found it pretty decent and still worthwhile. In this film, poor Arthur Kriticos can't catch a lucky break after his wife died in a fire. He and his kids are being evicted from one residence after another. He has nothing set aside for his kids and he's struggling to make end meet. One day, along comes the lawyer for his uncle, Cyrus, with news of his uncle's untimely death and announcement that he, his kids, and their jive-talking babysitter/nanny have inherited his house with rooms galore and separate bathrooms each, a fact which pleases Arthur's daughter, Kathy, to no end. However, upon arrival, they are joined by Dennis Rafkin, who used to work for Cyrus and wants the fair share of money that Cyrus promised him, as well as by Kalina Ortezia, a well-known individual in the spirit reclamation business who's had more than one encounter with Cyrus and is trying to free all the trapped spirits he captured. As it turns out, upon getting locked inside the house, discoveries about the house are made, a death or two is committed, the kids disappear, and Arthur will have to discover how far he'll go to keep his family safe. It may not be perfect but it's certainly a lot better than some of the films the production company behind this film made.
Read more
11 people found this helpful
Helpful
Report abuse

lindsay dominguez
5.0 out of 5 stars Yes! Super scary Ghosts and Awesome Remake!
Reviewed in the United States on April 18, 2016
Verified Purchase
I loved this movie! Great remake! I'm a huge horror fan, but not of the classics - I know...sad but true. I love horror 80's style thru today (2016) and the special FX only have gotten better. But, with Thirteen Ghosts (this version), the special effects are awesome! Synopsis: When Cyrus Kriticos, a very rich collector of unique things dies, he leaves it all to his nephew and his family. All including his house, his fortune, and his malicious collection of ghosts!
So as for watching this - YES! He%% YES. Should you watch it with your child? Well I did, but I raised my child on horror movies explaining that they weren't real, showing her the same characters that died in one movie were alive and well in another, and I watched a special effects documentary with her about horror makeup - best I could do I felt. She slept with me for many years...Say what you will, that's how this family rolls. So make your own mind up about who you watch this with, but let me just say that the monsters (ghosts) in this movie are SCARY!

masterjim
5.0 out of 5 stars Halloween Treat
Reviewed in the United States on March 5, 2017
Verified Purchase
Great Halloween movie. Very realistic, can be very scary for children. Basically a ghost story where ghosts are trapped in a specially built house and only visible wearing special glasses. A family inherits this house and are being picked off one by one by the 13 ghosts. Reminiscent of the Poltergeist and Friday the 13th movies.
Read more
5 people found this helpful
Helpful
Report abuse

Royal Showing
5.0 out of 5 stars A FAR UNDERRATED MODERN HORROR STORY
Reviewed in the United States on September 15, 2020
Verified Purchase
One of the Most Underrated Horror Movies Ever. This movie is imaginative and interesting. It has a fairly complicated well execution and well acted. PLOT: When Cyrus Kriticos, a very rich collector of unique things dies, he leaves it all to his nephew and his family. All including his house, his fortune, and his malicious collection of ghosts.
Let me just say that the monsters (ghosts) in this movie are SCARY. A Halloween Treat!

Lokii
5.0 out of 5 stars Those ghosts...
Reviewed in the United Kingdom on March 5, 2016
Verified Purchase
Love this movie and just had to buy it. Region A Blu-Ray movie bought from an Amazon USA store as this is not available in HD in the UK. The Blu-Ray plays perfectly on a Region B Blu-Ray player. Picture and Sound quality much improved on the DVD version.
Read more
3 people found this helpful
Report abuse

Mark Dobson
4.0 out of 5 stars Great remake of a classic
Reviewed in the United Kingdom on October 22, 2020
Verified Purchase
Thirteen ghosts is a great remake of classics a great scary movie delivered on the first day of the dates give for delivery thanks you
Read more
Report abuse

Steve
5.0 out of 5 stars Fabdidozey
Reviewed in the United Kingdom on October 2, 2020
Verified Purchase
Very funny movie and had to buy it to add to my vast collection.
Read more
Report abuse

sharon
5.0 out of 5 stars Value for money
Reviewed in the United Kingdom on November 4, 2019
Verified Purchase
Love this film and love this seller...never had a problem with any of the films or cd’s I buy...
Read more
Report abuse
See all reviews

Page 1 of 1 Start overPage 1 of 1
This shopping feature will continue to load items when the Enter key is pressed. In order to navigate out of this carousel please use your heading shortcut key to navigate to the next or previous heading.
Back
Next
Pages with related products. See and discover other items: daniel craig movies, robert culp