You have reached the cached page for https://www.amazon.com/Wide-Sargasso-Sea-Karina-Lombard/dp/B0000D0YXV
Below is a snapshot of the Web page as it appeared on 12/20/2020 (the last time our crawler visited it). This is the version of the page that was used for ranking your search results. The page may have changed since we last cached it. To see what might have changed (without the highlights), go to the current page.
You searched for: the wide sargasso sea movie We have highlighted matching words that appear in the page below.
Bing is not responsible for the content of this page.
Amazon.com: Wide Sargasso Sea: Karina Lombard, Nathaniel Parker, Rachel Ward, Michael York, Martine Beswick, Claudia Robinson, Huw Christie Williams, Casey Berna, Rowena King, Ben Thomas (III), Paul Campbell (IV), Audbrey Pilatus, Ancile Gloudon, Dominic Needham, Kevin Thomas, Aisha King, Anika Gordon, Elfreida Reid, Bobby Smith, Suzanne McMannus, Pat Gooden, Clifford Burt, Naomi Watts, James Earl, Kayarsha Russell, Jenny Wilson, Helen Woods, John Duigan: Movies & TV 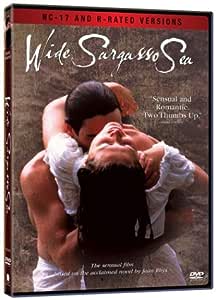 A prequel to "Jane Eyre." An Englishman in nineteenth-century Jamaica falls into a tortured marriage with a native Creole. When the woman begins to go mad, her husband takes her back to his gothic estate in England, where he locks her in the attic.

4.0 out of 5 stars
4 out of 5
126 global ratings
How are ratings calculated?
To calculate the overall star rating and percentage breakdown by star, we don’t use a simple average. Instead, our system considers things like how recent a review is and if the reviewer bought the item on Amazon. It also analyzes reviews to verify trustworthiness.
Top reviews

taaj
VINE VOICE
2.0 out of 5 stars Disappointed
Reviewed in the United States on August 13, 2019
Verified Purchase
I heard this was racy. Maybe for its time, but it's pretty tame now.

I wanted to see the backstory to Mr. Rochester and his wife. This was really a disappointment. It doesn't really explain the disparity between the character in this movie and the character in Jane Eyre. I really wanted to love this.

JOSE J GONZALEZ
4.0 out of 5 stars Not a great film but, quite enjoyable
Reviewed in the United States on September 10, 2018
Verified Purchase
I watched this film in a movie theater in NYC when it was released. Loved it so, I bought it on VHS. When I bought the NC17 on DVD, the disc would not play on my regionless Pioneer! It plays on my new DVR player Amazon just delivered. It is great to be able to watch the NC17 version.
Read more
2 people found this helpful
Helpful
Comment Report abuse

KP in Tucson
4.0 out of 5 stars Interesting
Reviewed in the United States on December 21, 2018
Verified Purchase
If I wasn't curious about supposed background for Jane Eyre, this wouldn't have been very interesting. Kind of like what the book "Healthcliff" was to Wuthering Heights, or the books "Scarlett" and "Rhett Butler's People" were to GWTW. None of them as good as original story, but interesting spin-offs.
Read more
One person found this helpful
Helpful
Comment Report abuse

Gil stir
3.0 out of 5 stars Adaptation of a classic but the director forgot the scenery was the star
Reviewed in the United States on August 16, 2019
Verified Purchase
Not enough time spent on the scenery otherwise evocative but you have to supply the memories of the beauty of the place yourself ,
Read more
One person found this helpful
Helpful
Comment Report abuse

Paulette Carter
5.0 out of 5 stars Excellent read! A possibility prelude to “Jane Eyre”
Reviewed in the United States on November 20, 2018
Verified Purchase
I love this book that I had to read For English class but so worthwhile the forerunner of Jane Eyre!
Read more
Helpful
Comment Report abuse

A. J Terry
3.0 out of 5 stars Would be improved by more character development
Reviewed in the United States on April 16, 2008
Verified Purchase
I'm a great fan of _Jane Eyre_ but have not read _Wide Sargasso Sea_, though reviewers of the film say the book is better.

This could have been an excellent character film, showing how Rochester exaggerated his relationship with his wife "Bertha" to Jane. Was Mason the brother-in-law mad, and passing a hereditary madness on to "Bertha"? No, he and his brother (the one who married Antoinette/Bertha's widowed mother) were not only not even her biological relatives, they were merely dips. Was Antoinette's mother mad? According to Antoinette's account, merely grief-stricken, alcoholic, sexy, and socially inconvenient--hence, locked up by the men who had legal power over her. And why should Rochester believe the statements of Daniel the half-brother? First, Daniel is an extortionist. Second, his revelation that Antoinette's father had affairs with his slaves is deeply shocking to Rochester, who somehow blames it on Antoinette. While I'm not condoning it, many other slaveowners did the same, so it would hardly have shocked a period Jamaican. Rochester, in fact, consistently refuses to accept Jamaica--he's constantly complaining about the climate, doesn't understand the racial tensions, and so on.

Still, Rochester's character could have been developed more deeply. As for Antoinette, she's merely a one-dimensional "child of nature," devoted to long sleeps, sex, and an enjoyment of the sultry climate. Given that after her parents' death she seems to have been brought up in a Catholic boarding school, she should display more in the way of education, social graces, and well, character. A more rounded character would make Antoinette far more sympathetic. As it is, the viewer is tempted to side with Rochester in wanting a wife who is interested in more than sex.

And one thing that would have been far more powerful, is establishing Antoinette as locked up by Rochester merely as an inconvenience, an alcoholic wife who doesn't understand British culture. One scene with Rochester urging/paying a doctor to certify Antoinette as mad no matter what, would have done this beautifully.

Other than that, although Nathaniel Parker doesn't look bad in the nude, Antoinette is too scrawny (and seems unable to do anything with her hair other than a modern pageboy style, for in bed or out of it). In summary, the film would be far better with more emphasis on character and less on sex. I will say that the actors doing Afro-Haitian dance actually do it well, unlike the ludicrously stiff and unpractised attempts at walzing done by the actors playing British characters. Also, the scenery is gorgeous.

Kirsty
5.0 out of 5 stars A haunting and provocative feminist masterpiece
Reviewed in the United Kingdom on November 19, 2020
Verified Purchase
A beautiful film to look at full of poetic and sultry imagery.Karina lombard is luminous and almost hypnotic the defining film of her career in my opinion.
Nothing else has captured both her doe eyed innocence and also wild ethereal beauty to such devastating effect as this film. Indeed with her mixed french and native american heritage and born in tahiti it really does seem as if karina was born to play this part i simply cannot think of a better or more suitable actress.
To the reviewer who admonished her for being scrawny well i think that is part of her unique charm. No she is not the usual buxom wench/sex kitten our western eyes are saturated with she is instead more of the femme/infant willowy exotic beauty of say a nastassja kinski or a jane birkin.
A would be women waiting to blossom not having quite matured enough and still in thrall to long nights of passion and playfull games of skinnydipping and drinking in bed. She is young for heavens sake and enamoured of life so why not?
Add to this the staid and rather stiff mr rochester (not very well played by nathaniel parker in my opinion he just doesn't have the depth or range) and you can see trouble brewing on the horizon a mile off.She awakens his lust but also his misogyny predictably enough he decides to put her in her place with all the entitlement since time began of the white elitist male privilege thats what is really seductive to him a sense of power and domination.The film depicts racial abuse in a sympathetic and sensitive manner its definately a thread that runs through the film but handled with grace in my opinion.
Consider the scene for example when mr rochester tries to have christophene thrown out of the house (a superlative performance by claudia robinson who dominates every scene she is in) and she squares up to him rather like a cobra circling its prey and tells him straight you cannot arrest me or have me thrown out as i am a free women mr rochester.
Sadly probably the first and last time a women has the power to stand up to him without damaging herself because she can and does walk away.
The same cannot be said of Bertha mason (karina lombard) her struggle to be an equal and assert herself is both heartfelt and heartbreaking but by god she doesn't half try.That its futile and ends badly is no fault of hers but a damning expose of both misogyny and as said before entitled male privilege that the sneering mr rochester with his patronising attitude towards both the natives and then his wife (finding out she is maybe of creole extraction just gives him the excuse he needs to justify his hatred) kills any sense of natural beauty and bliss and sensuality.
In fact he acts as a repellant and people leave in droves no longer wanting to be a witness to an abusive man who has no respect for either his wife or the country she is born into.
This is the dashing tormented hero of jane eyre smashed to smithereens both by jean rhys who wrote the book and john duigan who directed the film and also by karina lombard who by potraying the pathos of bertha mason showed with such passion how women are enslaved and then ultimately abandoned by a cruel and brutal patriarchy who have little interest in (except for exploitation of) warmth or love or humanity.
They say that still waters run deep so give this film a try i admit on the surface it flowed too easily and i didn't think much of it upon first viewing but then a funny thing happened some time after it was finished it crept up on me almost by stealth and then i couldn't stop thinking about it and indeed felt compelled to write this review as i wanted to find out for myself why it lingered and why it haunted me so?
The answer i believe is in bertha mason she still exists the mad women in the attic (so called) a prisoner of gendered oppression a reminder to us all that as women our progress and empowerment is still difficult and still a battle to obtain it our freedom as human beings in case we forget!
Read more
Report abuse

Amazon Customer
1.0 out of 5 stars Disappointment
Reviewed in the United Kingdom on January 25, 2018
Verified Purchase
It's the wrong format I cannot watch it in SWEDEN! I should have returned it but I had already opened it...
Read more
Report abuse

KJ Mansfield
4.0 out of 5 stars Wide Sea Sargasso Dvd
Reviewed in the United Kingdom on June 8, 2009
Verified Purchase
THis dvd is a good representation of the book, if you are someone who deoesnt like to read the books. This dvd is the closest thing you can get to representing the book.
Read more
5 people found this helpful
Report abuse
See all reviews