You have reached the cached page for https://www.rottentomatoes.com/m/shipping_news
Below is a snapshot of the Web page as it appeared on 1/11/2021 (the last time our crawler visited it). This is the version of the page that was used for ranking your search results. The page may have changed since we last cached it. To see what might have changed (without the highlights), go to the current page.
You searched for: the shipping news movie trailer We have highlighted matching words that appear in the page below.
Bing is not responsible for the content of this page.
The Shipping News (2001) - Rotten Tomatoes
Home
Top Box Office
Tickets & Showtimes
DVD & Streaming
TV
News 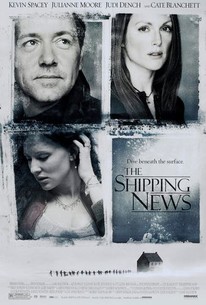 Though solidly made and acted, The Shipping News is rather heavy-handed and dull, especially given the nature of its protagonist.

Traces one man's extraordinary journey toward self -discovery when he returns to his ancestral home on the coast of Newfoundland. After the death of his estranged wife, Quoyle's fortunes begin to change when his long-lost aunt convinces him and his daughter to head north. Now, in a place where life is as rough as the weather and secrets are as vast as the ocean, Quoyle lands a job as a reporter for the local paper. In the course of his new career he uncovers some dark family secrets.

News & Interviews for The Shipping News

Critic Reviews for The Shipping News

Audience Reviews for The Shipping News