You have reached the cached page for https://www.rottentomatoes.com/m/mutant_chronicles
Below is a snapshot of the Web page as it appeared on 1/20/2021 (the last time our crawler visited it). This is the version of the page that was used for ranking your search results. The page may have changed since we last cached it. To see what might have changed (without the highlights), go to the current page.
You searched for: the mutant chronicles We have highlighted matching words that appear in the page below.
Bing is not responsible for the content of this page.
Mutant Chronicles (2008) - Rotten Tomatoes
Home
Top Box Office
Tickets & Showtimes
DVD & Streaming
TV
News 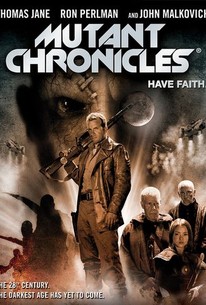 Bad acting, poor CGI and clunky script mean this sci-fi thriller is lacking in all departments including the thrills.

In the 28th century, four rival corporations are in a constant state of war for control of the Earth. During one such battle, an ancient machine is uncovered and reactivated, and starts churning out undead mutants by the hundreds. While the corporations make plans to abandon the Earth, a strike force led by Maj. Mitch Hunter (Thomas Jane) and clergyman Brother Samuel (Ron Perlman), embark on a mission to destroy the machine before the mutants overrun the planet.

Critics Consensus: Fighting Is Down For The Count
Five Favorite Films with Ron Perlman
Sam Raimi, Clive Barker, More At Fangoria’s Weekend of Horrors
View All