You have reached the cached page for https://www.rottentomatoes.com/m/the_mountain_between_us
Below is a snapshot of the Web page as it appeared on 2/28/2021 (the last time our crawler visited it). This is the version of the page that was used for ranking your search results. The page may have changed since we last cached it. To see what might have changed (without the highlights), go to the current page.
You searched for: the mountain between us movie trailer We have highlighted matching words that appear in the page below.
Bing is not responsible for the content of this page.
The Mountain Between Us (2017) - Rotten Tomatoes
Home
Top Box Office
Tickets & Showtimes
DVD & Streaming
TV
News 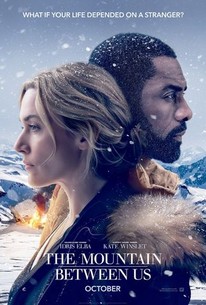 The Mountain Between Us may be too far-fetched for some viewers to appreciate, but it's elevated by reliably engaging performances from Idris Elba and Kate Winslet. Read critic reviews

The Mountain Between Us Videos

The Mountain Between Us Photos

Stranded on a mountain after a tragic plane crash, two strangers must work together to endure the extreme elements of the remote, snow-covered terrain. Realizing that help is not on the way, they embark on a perilous journey across hundreds of miles of wilderness, pushing each other to survive and discovering their inner strength.

News & Interviews for The Mountain Between Us

Critic Reviews for The Mountain Between Us

Audience Reviews for The Mountain Between Us

The Mountain Between Us Quotes