You have reached the cached page for https://www.rottentomatoes.com/m/1200661_informant
Below is a snapshot of the Web page as it appeared on 11/24/2020 (the last time our crawler visited it). This is the version of the page that was used for ranking your search results. The page may have changed since we last cached it. To see what might have changed (without the highlights), go to the current page.
You searched for: the informant movie review We have highlighted matching words that appear in the page below.
Bing is not responsible for the content of this page.
The Informant! (2009) - Rotten Tomatoes
Home
Top Box Office
Tickets & Showtimes
DVD & Streaming
TV
News 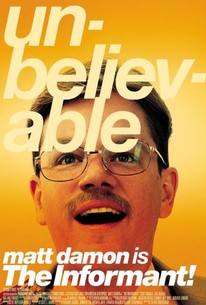 A charismatic turn by star Matt Damon and a consistently ironic tone boost this quietly funny satire about a corporate whistle-blower.

Though a rising star in the ranks of Archer Daniels Midland, Mark Whitacre (Matt Damon) suddenly exposes a price-fixing conspiracy to the FBI, agreeing to wear a wire and gather evidence against ADM and other agribusinesses. However, the FBI agents get a rude surprise when they learn that Whitacre has embezzled heavily from the firm.

News & Interviews for The Informant!

New on Netflix in August
Definitive Matt Damon Movies
RT on DVD & Blu-Ray: The Informant! and The Damned United
View All

Critic Reviews for The Informant!

Audience Reviews for The Informant!