You have reached the cached page for https://www.rogerebert.com/reviews/the-hole-in-the-ground-2019
Below is a snapshot of the Web page as it appeared on 5/25/2020 (the last time our crawler visited it). This is the version of the page that was used for ranking your search results. The page may have changed since we last cached it. To see what might have changed (without the highlights), go to the current page.
You searched for: the hole in the ground movie We have highlighted matching words that appear in the page below.
Bing is not responsible for the content of this page.
The Hole in the Ground movie review (2019) | Roger Ebert
Reviews

The Hole in the Ground

“The Hole in the Ground” is based on a single idea: no, not the breathtaking crater in the middle of some spooky woods, which gives this Irish horror film its title. Rather, it’s about a young boy who starts to act creepy one day, causing extreme paranoia within his mother. One could even call the title a misdirection were it not for the film’s third act that makes a connection between these two wildly different elements, but by that point my cryptic hopes of tension were dashed. This is a story that errs toward the familiar instead of embracing strangeness, its freaky kid becoming the distraction when you just want more time with the hole in the ground.

Sarah (Seána Kerslake) and her son Chris (James Quinn Markey) steal away from a previous life to start anew in rural Ireland. They have a house that’s perfect for a horror movie, replete with a basement where the lights flicker, not a lot of electricity in the hallways, and a creaky nature. But next to their little cottage is something that must not have been on the real estate listing: a majestic, sinister sinkhole in the nearby woods. It’s bad for them, but great for us.

The close proximity to the hole appears to have changed Chris in some way, as he starts to act strange and freaks his mother out, giving her nightmares and piling onto trauma of her abusive relationship with Chris’ father. The intriguing parallel of Chris' actions and the hole is put on the back burner, as the film becomes a clunky riff on “The Omen” or “The Bad Seed,” while unintentionally emphasizing that kids aren't scary (even if Markey is totally game for Chris' odd behavior). Or, if the wallpaper that Sarah adds to the old house is to be considered, "The Hole in the Ground" is like “The Shining” told through the perspective of Shelley Duvall's Wendy, and her son Danny is the monster. Either way, it becomes frustrating to see Cronin populate his genre film with more and more familiar elements, handling them as mere jump scare material and without adding a signature of his own.

Seána Kerslake provides a tangible emotional arc, portraying a mother who is progressively disturbed by the presence of her child but is also afraid of completely cutting him off. Somewhere in this story, Cronin and co-writer are picking at how kids change before parents’ eyes, and while that does not come to fruition, you do get a sense of the terror of being stuck with someone you do not know, and the nightmarish helplessness of people not believing you.

Though Cronin and Stephen Shields' script displays some compelling symmetry in its articulation of the terrifying concept of people we know the best looking unfamiliar, and has a clear visual motif (the presence of mirrors and distortions, kicking off with Chris looking at himself in a fun house mirror), it becomes frustrating to wait for this horror movie to be more than just loud. What “The Hole in the Ground” has more consistently than scares is a good score by Stephen McKeon, which is more disturbing in sound than how the film looks. With shrieking strings that feel more prepped to attack you before anything on-screen does, they can be the most uneasy part of the tale, as numerous scenes create a tension that’s then diffused by a lame cut to the next scene. “The Hole in the Ground” might think that it’s piling on tension to the story with these crescendoing passages, but instead it feels like music is just being used to fill in its many gaps.

This review was filed from the Sundance Film Festival on January 26th. 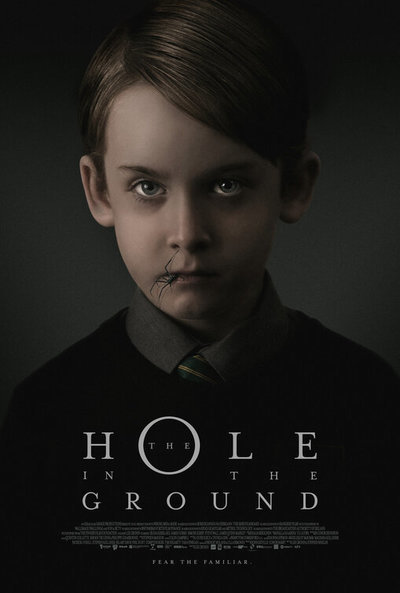 Rated R for some disturbing images.

The Heart Beats Differently When You’re in Character: Connie Nielsen on Inheritance

Cannes Flashback: Cannes Premieres of Life Itself, Foxcatcher and The Homesman