You have reached the cached page for https://tvtropes.org/pmwiki/pmwiki.php/TearJerker/TheDarkCrystalAgeOfResistance
Below is a snapshot of the Web page as it appeared on 8/24/2021 (the last time our crawler visited it). This is the version of the page that was used for ranking your search results. The page may have changed since we last cached it. To see what might have changed (without the highlights), go to the current page.
You searched for: the dark crystal: age of resistance tv tropes shows list We have highlighted matching words that appear in the page below.
Bing is not responsible for the content of this page.
The Dark Crystal: Age of Resistance / Tear Jerker - TV Tropes

For The Dark Crystal, see here. 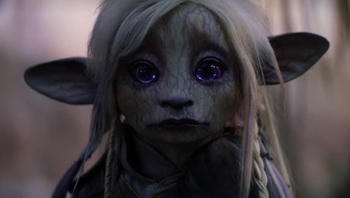 Poor Deet. You'll be heartbroken after learning everything bad that happened to her.
Advertisement:

End. Begin. All the Same.

Nothing Is Simple Anymore.

What Was Sundered and Undone.

The First Thing I Remember Is Fire.

She Knows All The Secrets.

A Single Piece Was Lost