You have reached the cached page for https://www.wrestlingattitude.com/2021/03/chelsea-green-signs-long-term-contract-with-wwe.html
Below is a snapshot of the Web page as it appeared on 4/12/2021 (the last time our crawler visited it). This is the version of the page that was used for ranking your search results. The page may have changed since we last cached it. To see what might have changed (without the highlights), go to the current page.
You searched for: taya valkyrie wrestler bikini We have highlighted matching words that appear in the page below.
Bing is not responsible for the content of this page.
Chelsea Green Signs Long-term Contract With WWE - Wrestling Attitude
Get a site
Skip to content

Chelsea Green has reportedly signed a new WWE contract, according to Fightful Select.

Green signed a new three-year deal with WWE since she suffered the wrist injury during her official SmackDown debut back in November before the Survivor Series pay-per-view.

Green’s original WWE contract was set to expire this summer, but now she’s locked in for another three years.

The former Impact Knockouts Champion signed her NXT contract back in August 2018 and worked that brand until her official call-up on the November 13 SmackDown, where she suffered the broken wrist.

Green is recovering from her wrist injury and was recently trying to get cleared, but there’s no word on when she will be back in action. As seen in the Instagram photo below, Green was recently training with Taya Valkyrie, who just signed with WWE. 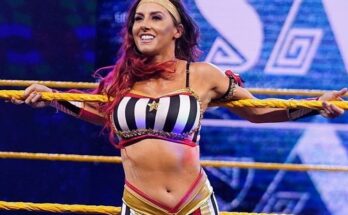 Michael Cole Trends On Twitter For Botched Call At WrestleMania 37