You have reached the cached page for https://www.fandango.com/syriana-85833/plot-summary
Below is a snapshot of the Web page as it appeared on 2/17/2021 (the last time our crawler visited it). This is the version of the page that was used for ranking your search results. The page may have changed since we last cached it. To see what might have changed (without the highlights), go to the current page.
You searched for: syriana movie free download 2020 We have highlighted matching words that appear in the page below.
Bing is not responsible for the content of this page.
Syriana Synopsis | Fandango 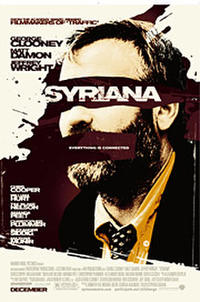 Tell us where you are

Looking for movie tickets? Enter your location to see which movie theaters are playing Syriana near you.

CHECK OUT WHAT'S PLAYING NEAR YOU

From writer/director Stephen Gaghan comes <i>Syriana</i>, a political thriller that unfolds against the intrigue of the global oil industry. From the players brokering back-room deals in Washington to the men toiling in the oil fields of the Persian Gulf, the film's multiple storylines weave together to illuminate the human consequences of the fierce pursuit of wealth and power. As a career CIA operative (George Clooney) begins to uncover the disturbing truth about the work he has devoted his life to, an up-and-coming oil broker (Matt Damon) faces an unimaginable family tragedy and finds redemption in his partnership with an idealistic Gulf prince. A corporate lawyer faces a moral dilemma as he finesses the questionable merger of two powerful U.S. oil companies, while across the globe, a disenfranchised Pakistani teenager falls prey to the recruiting efforts of a charismatic cleric. Each plays their small part in the vast and complex system that powers the industry.

Welcome Back to Movie Theaters

Fandango helps you go back to the movies with confidence and peace of mind.

See Open Theaters Near You