You have reached the cached page for https://www.amazon.com/Reservoir-Dogs-Original-Picture-Soundtrack/dp/B000002OK3
Below is a snapshot of the Web page as it appeared on 2/21/2021 (the last time our crawler visited it). This is the version of the page that was used for ranking your search results. The page may have changed since we last cached it. To see what might have changed (without the highlights), go to the current page.
You searched for: stuck on you movie soundtrack We have highlighted matching words that appear in the page below.
Bing is not responsible for the content of this page.
Various Artists - Reservoir Dogs: Original Motion Picture Soundtrack - Amazon.com Music 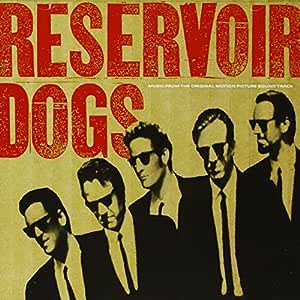 While not as much of a commercial success as Quentin Tarantino's later film Pulp Fiction, Reservoir Dogs is today regarded as a classic, although happily one that doesn't take itself too seriously. With its out-of-sequence narrative involving a diamond heist, its desperate characters expressing opinions on music and cinema, and the constant radio play (all the film's music is from source cues), Dogs remains shocking and exhilarating. Even stronger on the CD is the implication that the story is somehow being told by Steven Wright's deadpan '70s disc jockey. Tracks include "Little Green Bag" by the George Baker Selection, "Hooked on a Feeling" by Blue Swede, "I Gotcha" by Joe Tex, "Coconut" by Harry Nilsson, and the one that will always remind viewers of the movie's grisliest scene, "Stuck in the Middle with You" by Stealers Wheel. --Stanley Booth

4.6 out of 5 stars
4.6 out of 5
448 global ratings
How are ratings calculated?
To calculate the overall star rating and percentage breakdown by star, we don’t use a simple average. Instead, our system considers things like how recent a review is and if the reviewer bought the item on Amazon. It also analyzes reviews to verify trustworthiness.
Top reviews

Adam
5.0 out of 5 stars Awesome movie, equally strong soundtrack.
Reviewed in the United States on May 22, 2016
Verified Purchase
I love Quentin Tarantino's soundtracks just as much as I love his movies. He never fails to deliver an incredible soundtrack to a film that made you gaze at your screen in amazement as this twisted classic movie (which is Quentin's first film) had a perfect soundtrack. Full of 70's music, the music of the film is interactive with the film and even includes Steven Wright's (and you couldn't pick anyone better) to be the radio DJ for K-Billy's Super Sounds of the Seventies's Weekend.
Read more
3 people found this helpful
Helpful
Report abuse

Rosebud
5.0 out of 5 stars So good.
Reviewed in the United States on December 19, 2016
Verified Purchase
Love this album. I remember the movie and thought it was so dark, haven't seen it since. But the soundtrack is absolutely fabulous. I truly wanted it because of the Coconut song that is so upbeat and happy. I can't remember where it occurs within the movie so I guess I will have to order the DVD and see it again.
Read more
One person found this helpful
Helpful
Report abuse

burt
5.0 out of 5 stars These tunes are keepers
Reviewed in the United States on January 23, 2020
Verified Purchase
Should be a must in every collector’s library
Read more
Helpful
Report abuse

Kev Edwards
5.0 out of 5 stars Good CD compilation
Reviewed in the United Kingdom on August 31, 2018
Verified Purchase
All the music from the movie freshened up for the CD compilation.
Read more
One person found this helpful
Report abuse

Ledboot
4.0 out of 5 stars Short but great soundtrack
Reviewed in the United Kingdom on August 10, 2019
Verified Purchase
Could have used a couple more tracks but great mix of songs on this album.
Sounds fantastic on vinyl too.

Tom H
5.0 out of 5 stars Great soundtrack
Reviewed in the United Kingdom on April 2, 2020
Verified Purchase
One of the best sound tracks for a brilliant film. defo worth a listen
Read more
Report abuse

mandynolan
5.0 out of 5 stars A weekend of the sounds of the 70's.....
Reviewed in the United Kingdom on October 15, 2013
Verified Purchase
I've been getting into listening to soundtracks lately and Tarantino certainly puts together some of the best ones.....This really reminds me of the film, in which the music has a really strong presence......It has some great tracks and the speaking sections from the film are really good.....It has a really cool vibe and introduced me to tracks that I only knew from the film.....
Read more
Report abuse
See all reviews