You have reached the cached page for https://nypost.com/2015/01/10/duplass-brothers-tackle-suburban-malaise-in-togetherness/
Below is a snapshot of the Web page as it appeared on 4/22/2021 (the last time our crawler visited it). This is the version of the page that was used for ranking your search results. The page may have changed since we last cached it. To see what might have changed (without the highlights), go to the current page.
You searched for: steve zissis and the duplass brothers pics youtube We have highlighted matching words that appear in the page below.
Bing is not responsible for the content of this page.
Duplass brothers tackle suburban malaise in ‘Togetherness’ Skip to main content 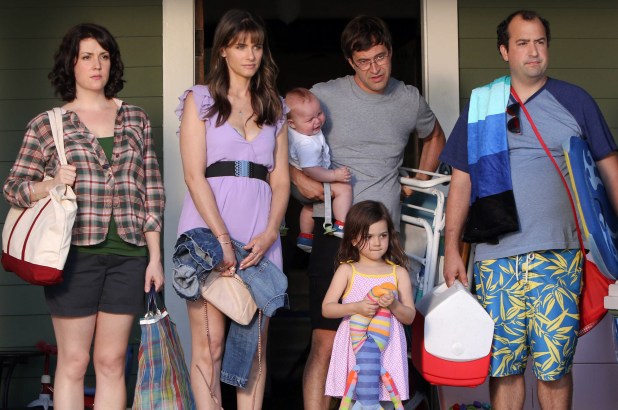 Brothers Jay and Mark Duplass have built a prolific independent film career, writing, directing and/or producing more than 20 movies together (“Cyrus,” “Jeff, Who Lives at Home”).

Their new HBO dramedy “Togetherness,” however, marks their debut as a TV writing team.

Sitting next to each other in a suite at the Langham Huntington Hotel in Pasadena, Calif., the brothers say that while they have watched other indie filmmakers make the jump to the small screen — and have each starred in TV shows (Jay in Amazon’s “Transparent,” Mark in “The League” and “The Mindy Project”) — creating a series was not a specific goal.

The eight-episode “Togetherness” — premiering Sunday at 9: 30 p.m. — follows four adults nearing 40, all living under the same roof in East LA and struggling to keep their relationships and their dreams alive.

Mark plays Brett, who is fighting to rekindle the spark with his wife Michelle (Melanie Lynskey). Faced with the malaise of a middle-class life in the suburbs, the couple invites Brett’s best friend Alex (Steve Zissis), a struggling actor, and Michelle’s husband-hunting sister Tina (Amanda Peet), to move in with them and their two kids.

Both Duplass brothers have been married for 13 years and each have two young kids, so they draw stories for the show from their own marriages, as well as the experiences of their married and single friends. The siblings’ shared history — they’ve been making movies together since they were 10 and 7 — makes for an easy, collaborative working relationship.

“The fact that there are two of us and we have the same sensibility, we love the same stuff, our taste was curated in the same house … I think there’s a reason there are so many sibling teams,” say Jay, 41.

Whether in film or TV, the Duplasses strive for a “goofy earnestness” in their work, including with the title “Togetherness,” which reflects an eternal conflict that could ideally last six seasons (they are already breaking stories for a likely second season).

“Theme-wise, it’s that wonderful thing you strive for, which is to be as close and intimate as possible with our friends and our spouses and our kids and our parents,” Mark says, “but at the same time, the desire we have at some times to just f–king eject from that and get some goddamn space.”

Lifetime to deliver new reality show 'Born in the Wild'