You have reached the cached page for https://www.directrelief.org/2021/04/st-vincent-volcano-eruption-live-story/
Below is a snapshot of the Web page as it appeared on 10/18/2021 (the last time our crawler visited it). This is the version of the page that was used for ranking your search results. The page may have changed since we last cached it. To see what might have changed (without the highlights), go to the current page.
You searched for: st vincent volcano eruption We have highlighted matching words that appear in the page below.
Bing is not responsible for the content of this page.
St. Vincent Volcano Eruption: Live Story
Skip to content

The Caribbean island of St. Vincent is facing a series of eruptions from the La Soufriere volcano, which killed 1,600 people when it erupted in 1902. The island’s 111,000 residents are currently under threat from pyroclastic (hot gas and debris) flows, widespread ash, and the degradation of local food and water supplies — as well as the ongoing Covid-19 pandemic.

Direct Relief is responding to requests for local partners to help support emergency response efforts and vulnerable populations on the island.

Today, Direct Relief Program Manager Luis David Rodriguez is in Vieux Fort, St. Lucia to assist in response to the St. Vincent volcanic eruption. Luis is working closely with the Organization of Eastern Caribbean States and the Pan American Health Organization to ensure that necessary medical supplies are properly allocated.

From Direct Relief’s Research and Analysis team, here is a new story map that shows population mobility data over the past week, amid the volcanic eruption on St. Vincent. The data is sourced from Facebook’s Data for Good program, which compiles randomized Facebook App data rom users who have opted-in to the program.

A major explosion started this evening, marking the ninth significant explosion since December 2020. Ash plumes are reaching as high as 8,000 feet, with ash raining heavily on the entire island as well as neighboring islands, such as Barbados.

Water supply across the island continues to be compromised and completely cut off in some areas, as well as power and internet. Aerosol plumes have traveled across vast stretches of the northern hemisphere.

The UN reports that about 4,000 displaced people are living in 87 shelters set up by the St. Vincent Government, many of which lack basic services such as drinking water. Thousands more are staying in private homes of family and friends on the other end of the island. Evacuations to surrounding island nations continue, but in smaller numbers.

Explosive activity is expected to continue for months, so the top priorities are water supply and shelter management.

The death toll remains at zero.

Direct Relief continues to receive and field requests for support.

Nine pallets of assorted PPE arrived to the Ministry of Health in St. Vincent.

In its latest update, CDEMA reports that “eruptions continue although explosive activity has reduced.”

The report also states that long-period and hybrid earthquakes are ongoing at La Soufrière Volcano. After a lull last night, they have been constant.

The new volcanic crater now measures 900 meters at least 750 meters and is estimated to be 100 meters, according to Raphael Grandin of the University of Paris’s Institut De Physique Du Globe De Paris.

Explosions with ashfall could restart in the future, the report cautioned.

Two containers of PPE arrived to the Organization of Eastern Caribbean States (OECS) in St. Lucia yesterday. A portion is being sent to St. Vincent by boat tomorrow morning.

On the map below (one or two geocoding errors but it’s almost entirely correct) you can see the population displacement from the north of St. Vincent to the south as well.

Direct Relief Shipment On The Way

A 20-pallet shipment, valued at $1.8 million, was picked up from Direct Relief’s Santa Barbara headquarters by FedEx, en route to St. Lucia, where it will be staged for delivery to St. Vincent.

An analysis of anonymized Facebook-provided user data suggests that people in St. Vincent are moving south on the island, with that area’s population having increased by about 40%, compared to the pre-eruption baseline. Based on this analysis, the greatest proportional change actually came from St. Patrick, not from St. David – which is the district where the volcano is located. St, David principally sent folks to St. Patrick – so there may have been a cascade effect of departures over the five days. St. George actually sent a reasonably significant number of people to St. David, which may include the relief effort and the assessment teams.

This is all tracking movement within the country – not internationally – although it is interesting that there’s essentially no recorded movement to the more southern islands.

Original reporting from Talya Meyers detailed the latest developments on the island, where 16,000 people have been evacuated during the most violent phase of the eruption so far, as well as Direct Relief’s response. Shipments from Santa Barbara are being prepared at the request of the Organization of Eastern Caribbean States and St. Vincent’s Ministry of Health, Wellness, and the Environment, WHO’s Pan American Health Organization, and other local partners.

Wildfires and volcanic eruptions carry may of the same risks to medically vulnerable members of the population, particularly those with respiratory conditions. Reflecting this, Direct Relief is readying its Wildfire Health Kits for delivery to St. Vincent. Each kit is designed to enable the treatment of about 250 people for 3 to 5 days, with medicines and supplies most requested by healthcare providers in past wildfire emergencies.

Each pre-packed kit contains essential medicines and medical supplies to treat the most common health conditions caused and exacerbated by wildfires and mass evacuations. Some of the items are inhalers and nebulizer solutions to treat respiratory irritation, irrigation solutions and antibiotics for skin and eye injuries, analgesics for headaches, bandages and wound care items for lacerations and minor injuries like sprains and strains, and personal protective equipment (PPE) such as masks and gloves to protect health workers.

La Soufriere has moved into an explosive state since early this morning. The island’s pre-emptive evacuation preparation and arrangements went into full effect yesterday and, as of this morning, close to 20,000 people have been evacuated from the area surrounding the volcano. Some evacuees were transported by land to other parts of the island, outside of the impact zone of the volcano. Two cruise ships from Royal Caribbean and two from Carnival Cruise Line arrived Thursday and Friday to ferry other groups of evacuees to nearby islands or shelters elsewhere in St. Vincent.

Direct Relief is building palletized donations that contain an assortment of supplies including N95 masks, respiratory medications, burn creams, hygiene kits, cots, first aid kits and Direct Relief Wildfire Health Kits. The N95 masks will be accompanied by the leaflets which indicate safest use of masks for protection against inhalation of volcanic ash.

The airport in St. Vincent is now closed. This emergency shipment will be consigned to OECS in St. Lucia, where it will be transferred by boat to St. Vincent.

The Pan American Health Organization has activated their Emergency Operations Center for this event.

The primary health concerns during volcanic eruptions are similar to wildfires, and include respiratory distress, eye and skin irritation, contaminated water supply, the intensification of chronic illnesses when access to medicine is compromised.

The Barbados Defense Force Field Medical Team is preparing for deployment to St. Vincent. They are assessing needs and will be sending requests for support shortly. The Barbados Defense Force has a WHO-qualified Emergency Medical Team and field hospital, to support Barbados and the greater Caribbean in times of need. In March, Direct Relief supported the field hospital with 10 cots, 1 tent with lighting kit, and 2 emergency health kits each of which contained medicines and supplies frequently used and needed in emergency situations.

For the most recent updates from the field, here are Direct Relief responding partners’ social media accounts:

St. Vincent is a volcanic island in the eastern Caribbean. It is composed of partially-submerged volcanic mountains. Its largest volcano, La Soufriere, is signaling significant activity, and is expected to erupt imminently. Prime Minister Dr. Ralph Gonsalves has issued an evacuation order for 20,000 people (20% of the island’s population) as conditions at La Soufriere continue to deteriorate. Evacuees will be transported by boat to St. Lucia, Barbados, and Trinidad and Tobago.

Direct Relief has offered support to the Chief Pharmacist of St. Vincent, the Organization of Eastern Caribbean States (OECS) and the Pan American Health Organization (PAHO).

The primary health concerns during volcanic eruptions are similar to wildfires, and include respiratory distress, eye and skin irritation, contaminated water supply, the intensification of chronic illnesses when access to medicine is compromised.

Since 2008, Direct Relief has provided the Ministry of Health of St. Vincent with 29 shipments valued at over $10 million. 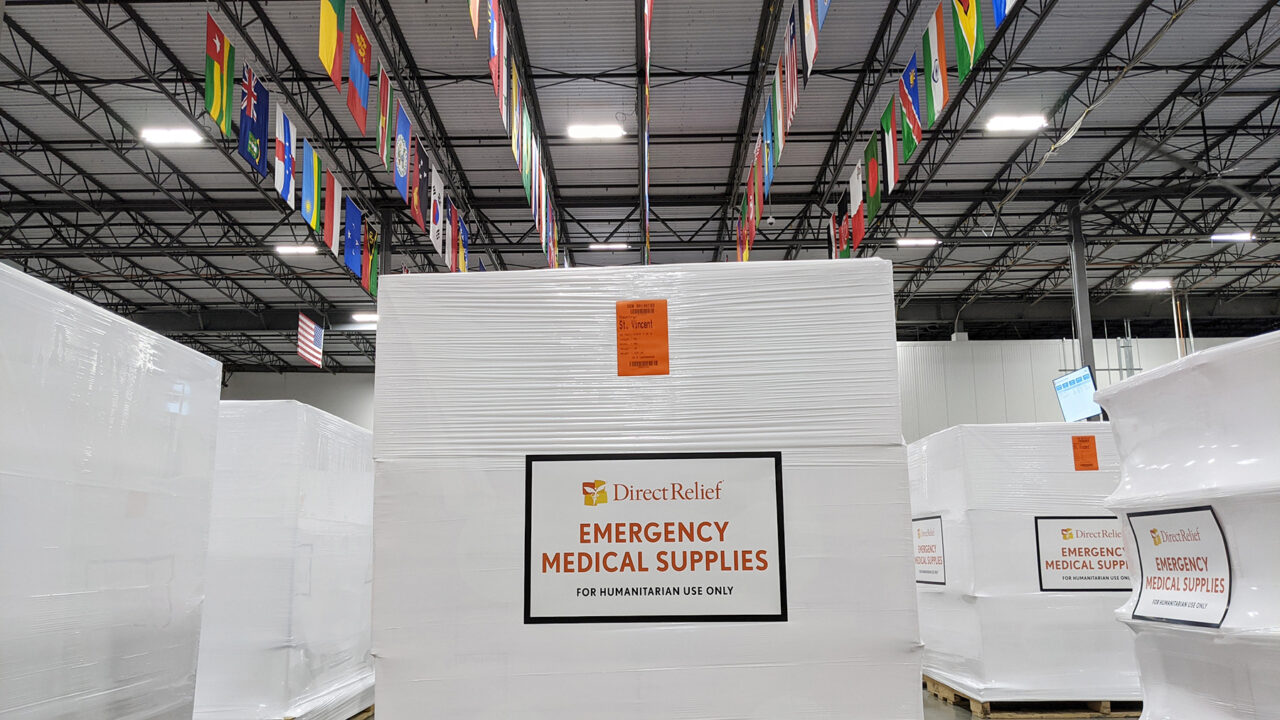 You don't have to donate. That's why it's so extraordinary if you do.