You have reached the cached page for https://snowpiercer.fandom.com/wiki/Prepare_to_Brace
Below is a snapshot of the Web page as it appeared on 1/16/2021 (the last time our crawler visited it). This is the version of the page that was used for ranking your search results. The page may have changed since we last cached it. To see what might have changed (without the highlights), go to the current page.
You searched for: snowpiercer prepare to brace We have highlighted matching words that appear in the page below.
Bing is not responsible for the content of this page.
Prepare to Brace | Snowpiercer Wiki | Fandom

Layton uses his new position as train detective to investigate the murder while gathering intel for the revolution on the side. Meanwhile, Melanie faces a resource crisis, with potentially drastic consequences for the entire train.

In the Tail, Ruth makes an announcement, remarking that the Tailies live on Snowpiercer without having to work, or do anything except be complacent and not rebel. For the rebellion, however, one person must pay, and the guard takes a little girl from the scared crowd. Fearing what will happen to the girl, her mother begs Ruth to let her go and punish her instead, to which Ruth reluctantly agrees to when the mother Suzanne admits responsibility for her actions and her part within the rebellion. For this, a clamp is placed around the woman’s arm, which is held outside of the train and allowed to freeze completely. When it is brought back inside, one of the guards smashes the arm with a large hammer, shattering it instantly into pieces.

Meanwhile, Melanie keeps her promise to Layton and allows the leaders of the rebellion to be put into stasis instead of killed. Pike tells Layton to remember — and keep — his promise, to which Layton acknowledges.

At the front of the train, Melanie receives an update from Javi, who recommends that they pull the speed 12% in order to stay safe and ensure that they don’t derail; their high speed is causing mass-avalanches all over the place. Despite this, Melanie tells Javi that she cannot announce more black-outs, and that they will maintain speed. Javi wonders how much longer Melanie can keep up her behaviour, as she begins her morning routine of announcing the outside temperatures.

Shortly after, Melanie and Ruth serve breakfast towards the front of the train. There are talks about the uprising and murder in Third, and Melanie enters a tense conversation with Lilah about the investigation. Nevertheless, Melanie assures Lilah — and the remainder of First — that the investigation is underway and they will have answers soon.

Layton is paired with Till once again as his investigation heads underway. He is taken to see the person who found the body, whom he asks again about how he came to find the body. Carter explains that he was working routine maintenance when he found the body below the floor panel. Layton questions who had access to the sub-system and the checkpoints between each sector, however Till advises him not to answer whilst Layton remarks that he is trying to assess how far someone could move a body. Carter leaves and Till reveals that there are two hours until the autopsy, but Nikki has not awoken yet.

In the medical carriage, Nikki is struggling to wake, and Melanie questions what the issue is. Henry reveals that he isn’t sure, and when Jinju suggests they put the whole programme on hold, he promises to figure out the issue, remarking that he takes good care of his subjects.

Till takes Layton to the nightcar where Nikki worked the night of the murder. He is bemused by the vocals of the singer, Miss Audrey, and stares intensely as he watches those around him dancing. After she finishes, he questions her about the night of the death, and she reveals that she found Nikki drugged — presumably by the real killer — but Nikki was charged anyway as a means to a quick case close. Audrey allows Layton to have a glass of whiskey on the house as a thank you, remarking that giving Third a glimmer of hope is enough. When Layton questions what happens in the Nightcar, Audrey is able to convince Till to allow Layton twenty minutes unsupervised. She reveals that it is not a brothel, but a place for those to heal and reflect. With this, Audrey leaves Layton with Zarah, who leads him through a meditation exercise. Layton experiences flashes of memories of him and Zarah, including when he asked her to marry him, and the two kiss in the Nightcar before having sex. Afterwards, Zarah tells Layton that she doesn’t think Wilford is telling them everything about Sean.

In med bay three, Pelton sarcastically remarks that she doesn’t have experience in autopsy, but will give it a go. The three of them take in turns identifying wounds and suggesting objects that could’ve caused them, before Layton suggests that the severed arms and legs may have ended up at the butchers and in the food aboard Snowpiercer; Till is horrified, and Layton tells her a story of how the Tailies were formerly cannibals. Layton and Till visit the butchers, but are refused entry without a notary.

Melanie, Jinju and Henry are attempting to figure out why Nikki is not waking, with suggestions that she has been under too long, and that these things are complicated. Melanie opens the carriage doors in the lab and looks upon the hundreds of bodies in stasis. At that moment, it becomes clear at the front of the train that the whole slope around them is collapsing, Melanie realizes this and calls for those in medical to brace for impact. Javi remarks at the front of the train that they won’t make it through the debris. In one of the Ag-Sec carriages — where the cows are kept — the thrashing of the train causes debris to hit and smash the window. Everything in the carriage freezes to death instantly.

Till and Layton are granted access to the refrigerator where they find the severed arms and legs behind a hidden vent.

Meanwhile, after investigating the damage, Melanie tells Bojan that they can reverse speed by 10%. Bojan objects, however, remarking that he needs 25%, but Melanie remarks that they can’t make up the speed again or the battery power. 12% is the maximum.

Bennett, Melanie, and Jingju discuss how they can best allocate resources during the rolling blackouts. They decide that they must ration access to water, not the water itself, remarking that the Tail must survive on what they have hoarded until the issue is resolved. Bennett questions if this is what resource starvation is like, starving the train from Tail to First. Melanie demands that the severity of the issue be kept between the three of them, and that they proceed as planned.

In the Tail, Ruth announces that they will go ahead with apprentice selection despite the current tumultuous situation. Three children are picked, including Miles, to move up-train. At the same time, Suzanne's son gives Oz oral sex to get medicine for his mother, though he only gets Kronole and not the pain medicine he'd hoped for.

Till calls Roche to explain the findings, however Layton pleads with her to hand up and consider the facts that the butcher didn’t kill Sean. After a guard calls Layton a Tailie, Till attacks him, warning him to back off. She further explains that she was assigned to the first murder and that Nikki had no chance to be found innocent; this time, she wants justice.

After being put into his cell, Layton uses objects he has gathered throughout the day to write on his clothing a map of the train. He leaves this outside of his room for a member of the Tail to pick up whilst he distracts the guards. Layton is badly beaten by the guards and later confronted by Melanie. He reveals that he knows Sean was a Wilford mole and that they do not care about the death, only about the secrets he revealed during his torture. Melanie admits that he's right, confessing that Layton's perceptiveness is why Mr. Wilford wants him as Train Detective. However, Melanie makes it clear that that is the only reason he is still there.

Behind the Scenes[edit | edit source] 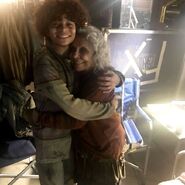 Retrieved from "https://snowpiercer.fandom.com/wiki/Prepare_to_Brace?oldid=6414"
Community content is available under CC-BY-SA unless otherwise noted.