You have reached the cached page for https://www.rottentomatoes.com/m/slackers
Below is a snapshot of the Web page as it appeared on 1/18/2021 (the last time our crawler visited it). This is the version of the page that was used for ranking your search results. The page may have changed since we last cached it. To see what might have changed (without the highlights), go to the current page.
You searched for: slackers movie 2002 We have highlighted matching words that appear in the page below.
Bing is not responsible for the content of this page.
Slackers (2002) - Rotten Tomatoes
Home
Top Box Office
Tickets & Showtimes
DVD & Streaming
TV
News 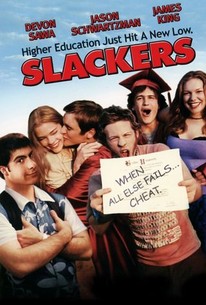 Another teen comedy with little on its mind but moving to the next gross-out gag, Slackers strains for laughs and features grating characters.

Dave (Devon Sawa), Sam (Jason Segel) and Jeff (Michael Maronna) are about to graduate from Holden University with honors in lying, cheating and scheming. The three roommates have proudly scammed their way through the last four years of college and now, during final exams, these big-men-on-campus are about to be busted by the most unlikely dude in school. Self-dubbed Cool Ethan (Jason Schwartzman), an ambitious nerd with a bad crush, enters their lives one day and everything begins to unravel.