You have reached the cached page for https://newikis.com/en/Duchy_of_Masovia
Below is a snapshot of the Web page as it appeared on 7/22/2020 (the last time our crawler visited it). This is the version of the page that was used for ranking your search results. The page may have changed since we last cached it. To see what might have changed (without the highlights), go to the current page.
You searched for: siemowit iii duke of masovia history timeline We have highlighted matching words that appear in the page below.
Bing is not responsible for the content of this page.
Duchy of Masovia

The Duchy of Masovia (Polish: Księstwo Mazowieckie) was a medieval duchy formed when the Polish Kingdom of the Piasts fragmented in 1138. It was located in the historic Masovian region of northeastern Kingdom of Poland. The duchy was re-incorporated into the Jagiellonian Kingdom of Poland by 1526.

The lands of the Masovians east of the Vistula river had been conquered by the Piast duke Mieszko I of Poland (960–992) and formed a constituent part of his Civitas Schinesghe. The Masovian Diocese of Płock was established in 1075. 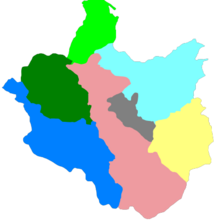 Following the death of Duke Bolesław III Wrymouth in 1138, as specified by his testament, the Masovian province was governed by his second son Bolesław IV the Curly, who, after he had expelled his elder half-brother Władysław II, in 1146 became Grand Prince (High Duke) of Poland. His Masovian realm also comprised the adjacent lands of Kujawy (Kuyavia) on the west bank of the Vistula.

Among the Piast Dukes of Masovia, Bolesław's IV nephew Konrad I was Polish high duke from 1229 to 1232 and again from 1241 to 1243; he was the ruler who in 1226 called the Teutonic Order for help against the pagan Old Prussians threatening the northern borders of his territory. In turn he ceded the Prussian Chełmno Land (Kulmerland) to the knights in 1230; according to the Golden Bull of Rimini (dated 1226), issued by the Hohenstaufen emperor Frederick II, these lands became the nucleus of the Order State. In 1233 Konrad gave Kujawy to his second son Casimir I, while Masovia passed to the first-born Bolesław I upon his death in 1247, succeeded by the youngest brother Siemowit I the next year.

While Siemowit's son Duke Konrad II (1264–1294) moved his residence to Czersk he and his brother Bolesław II entered into a long-term conflict over the Polish seniorate with their Kujawy relatives and the Silesian Piasts, which estranged them from the Piast monarchy. When the kingdom was finally restored in 1295 by the coronation of Duke Przemysł II of Greater Poland, the Duchy of Masovia remained independent.

As neither Siemowit II nor Bolesław III of Płock left any heirs, Trojden's son Duke Siemowit III (1341–1381) was able to re-unite most of the Masovian lands under his rule; in 1351 he and his brother Casimir became vassals of the Polish kings, while the Bishopric of Płock had always been part of the Polish Archdiocese of Gniezno. Upon Siemowit's III death in 1381 however, Masovia was again partitioned between his sons:

After the establishment of the Rawa and Płock Voivodeships, in 1495 the last surviving son of Boleslaus IV, Duke Konrad III Rudy, once again united the remaining Masovian lands under his rule. However, the male line of the Masovian Piasts became extinct upon the death of his son Duke Janusz III in 1526, whereafter the duchy as a reverted fief became the Masovian Voivodeship of the Polish Crown.

Uses material from the Wikipedia article Duchy of Masovia, released under the CC BY-SA 3.0 license.