You have reached the cached page for https://www.amazon.com/Shakespeare-Uncovered-Set-Stories-Greatest/dp/B00UW1YXW8
Below is a snapshot of the Web page as it appeared on 2/17/2021 (the last time our crawler visited it). This is the version of the page that was used for ranking your search results. The page may have changed since we last cached it. To see what might have changed (without the highlights), go to the current page.
You searched for: shakespeare uncovered tv series We have highlighted matching words that appear in the page below.
Bing is not responsible for the content of this page.
Amazon.com: Shakespeare Uncovered, Series 1 & 2 Set: Stories Behind the Bard's Greatest Plays: Morgan Freeman, Hugh Bonneville, Ethan Hawke, Jeremy Irons, Derek Jacobi, Kim Cattrall, Christopher Plummer, Trevor Nunn, Joseph Fiennes, David Harewood, Joely Richardson, David Tennant: Movies & TV 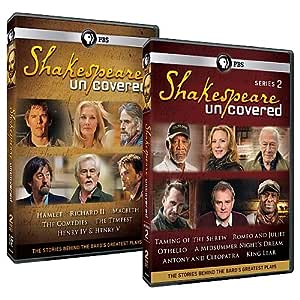 Behind every Shakespeare play is a story. Shakespeare Uncovered portrays the Bard as an impresario who, four centuries ago, defined show business in his day by drawing on historical sources, stealing and adapting ideas, bringing back popular characters, writing prequels, and developing dramatic ideas from the politics of the day. In each episode of Shakespeare Uncovered, Series 1 and 2, a major Shakespearean actor or director explores and reveals the extraordinary world and works of William Shakespeare and the still-potent impact they have today. The presenters have spent their lives with Shakespeare's work and relate not only to the stories of the plays themselves, but also how they came to be written, how they have been performed, and how they have survived over 400 years. The series reviews history, biography, iconic performances, new analysis and the personal passion of the celebrated hosts to tell the story behind the stories of Shakespeare's greatest plays. Each episode combines clips and interviews with actors, directors and scholars (Including Patrick Stewart, Jude Law, Vanessa Redgrave, Ben Whishaw, Helen Mirren and director Julie Taymor), along with visits to key locations, clips from some of the most celebrated film and television adaptations, and illustrative excerpts from the plays specially staged for the series at Shakespeare's Globe in London. Celebrated hosts include Morgan Freeman, Hugh Bonneville, Ethan Hawke, Jeremy Irons, Derek Jacobi, Kim Cattrall, Christopher Plummer, Trevor Nunn, Joseph Fiennes, David Harewood, Joely Richardson and David Tennant. Contains These 12 Episodes: Taming of the Shrew, Romeo and Juliet, Othello, A Midsummer Night's Dream, Antony and Cleopatra, King Lear, Hamlet, Macbeth, Richard II, The Comedies: Twelfth Night and As You Like It, The Histories: Henry IV and Henry V, The Tempest.

4.2 out of 5 stars
4.2 out of 5
10 global ratings
How are ratings calculated?
To calculate the overall star rating and percentage breakdown by star, we don’t use a simple average. Instead, our system considers things like how recent a review is and if the reviewer bought the item on Amazon. It also analyzes reviews to verify trustworthiness.
Top reviews

terra forma
5.0 out of 5 stars NOW I KNOW WHAT THE BIG DEAL IS
Reviewed in the United States on August 4, 2017
Verified Purchase
One of my goals in life was to read the Shakespeare plays. Then I found this DVD set. Don't call me lazy yet. This excellent set brings out the idea that Shakespeare can be read in different ways depending on interpretation. So I got various interpretations from each of the narrators and the play they each presented. I would never have gotten those rich perspectives on my own. So unless you're a student of Shakespeare, this is an extremely great set for understanding what the big deal about Shakespeare is.
Read more
9 people found this helpful
Helpful
Report abuse

Marc A Abelanet
5.0 out of 5 stars It's Shakespeare! That should say it all!
Reviewed in the United States on December 8, 2018
Verified Purchase
Our daughter in law is a teacher and we are giving her ALL the Shakespeare Uncovered videos because she teaches a
class on Shakespeare and they should be of great help!

Eleanor Gilpatrick
5.0 out of 5 stars Wonderful Insights
Reviewed in the United States on February 10, 2017
Verified Purchase
I was delighted with the insights and level of this series. Makes Shakespeare even more exciting than he already is. And it was wonderful to see The Globe Theater in London! MORE!!
Read more
One person found this helpful
Helpful
Report abuse

Rosario Cordera
5.0 out of 5 stars Five Stars
Reviewed in the United States on June 1, 2018
Verified Purchase
Enjoyed every minute of it!
Read more
Helpful
Report abuse

patti wilson
1.0 out of 5 stars Did not like
Reviewed in the United States on July 28, 2018
Verified Purchase
Dislike
Read more
Helpful
Report abuse
See all reviews

T W Bates
4.0 out of 5 stars Actors reacting to the experienced acting in roles written by Shakespeare.
Reviewed in Australia on September 24, 2018
Verified Purchase
Gifted actors talking about their craft and art in relation to performing in Shakespeare,immensely enjoyable.
Read more
Report abuse
See all reviews
Pages with related products. See and discover other items: macbeth story
Back to top
Get to Know Us
Make Money with Us
Amazon Payment Products
Let Us Help You
EnglishChoose a language for shopping. United StatesChoose a country/region for shopping.
© 1996-2021, Amazon.com, Inc. or its affiliates