You have reached the cached page for https://nypost.com/2019/09/03/joe-manchin-says-he-plans-to-stay-in-senate-wont-run-for-governor/
Below is a snapshot of the Web page as it appeared on 1/15/2021 (the last time our crawler visited it). This is the version of the page that was used for ranking your search results. The page may have changed since we last cached it. To see what might have changed (without the highlights), go to the current page.
You searched for: senator joe manchin term We have highlighted matching words that appear in the page below.
Bing is not responsible for the content of this page.
Joe Manchin says he plans to stay in Senate, won’t run for governor Skip to main content

Joe Manchin says he plans to stay in Senate, won’t run for governor

1 Armie Hammer’s ex Courtney Vucekovich: He wanted to 'barbecue and eat' me 2 It seems clear whom Urban Meyer wants as the Jaguars' quarterback 3 Pregnant influencer's cause of death revealed 4 Viewers say Netflix went too far in graphic series 5 Air Force vet fatally shot at Capitol was in a 'throuple': reports 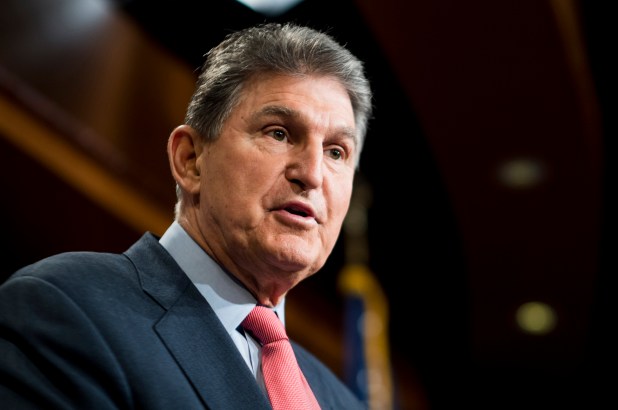 Bipartisan $908B coronavirus stimulus bill to be unveiled Monday

Sen. Joe Manchin announced Tuesday he planned to stay put in the Senate and not run for West Virginia governor, spelling relief for Democrats who now see a pathway to taking the Senate majority in 2020.

“I have always said that ‘public service is not self-service.’ So, when considering whether to run for governor, I couldn’t focus just on which job I enjoyed the most, but on where I could be the most effective for the Mountain State,” said Manchin, a Democrat who previously served as the state’s governor.

“Ultimately, I believe my role as a U.S. senator allows me to position our state for success for the rest of this century.”

Manchin entered the Senate in 2010 and ran for re-election last year. He squeaked out a win against Republican Patrick Morrisey, the state’s attorney general, with 49.5 percent of the vote.

Republicans were licking their lips at the prospect of easily replacing Manchin in the Senate as the state has progressively gotten more red. West Virginia voted for President Trump by a margin of 42 points.

The rest of the Senate map for 2020 has recently gotten tougher for the GOP. Democrats only need to pick up four seats — three if their candidate wins the White House — to take the majority.

Democrats’ primary targets are taking out Republicans in Colorado, Maine and Arizona. Former 2020 hopeful and ex-Colorado Gov. John Hickenlooper has announced his intentions to run for Senate against Republican Sen. Cory Gardner, known for working across the aisle on such things as the 9/11 Victim Compensation Act bill.

Joe Manchin considering leaving the Senate before his term is up: report

And Democrats are hoping to repeat their luck in Arizona, as Sen. Kyrsten Sinema (D-Ariz.) already beat Sen. Martha McSally (R-Ariz.) once. McSally was later appointed to Arizona’s other Senate seat, though she faces re-election next year.

The Democrats also are looking to Texas,  North Carolina and Georgia — with Republicans now having to defend both Senate seats in Georgia thanks to the news of Sen. Johnny Isakson’s retirement last week.

There are a number of states that could be surprises too, including Montana, Kentucky, Kansas and South Carolina.

The Democrats will have to defend some tough seats too, including Sen. Doug Jones’ in Alabama, which he won in a special election upset in December 2017.

Movers seen at White House week ahead of Biden arrival

Best Valentine's Day gift baskets 2021: 23 ideas for all your Valentines

Diane von Furstenberg takes up to 30 percent off wrap dresses, outerwear and more

Best board games for adults 2021: 32 fun games to liven up any party

Playing outside is ‘snow’ problem for paraplegic pups

Armie Hammer’s ex Courtney Vucekovich: He wanted to 'barbecue and eat' me