You have reached the cached page for https://en.audiofanzine.com/audio-midi-converter/roland/GR-33/user_reviews/
Below is a snapshot of the Web page as it appeared on 1/20/2021 (the last time our crawler visited it). This is the version of the page that was used for ranking your search results. The page may have changed since we last cached it. To see what might have changed (without the highlights), go to the current page.
You searched for: roland synthesizer gr33 We have highlighted matching words that appear in the page below.
Bing is not responsible for the content of this page.
User reviews: Roland GR-33 - Audiofanzine 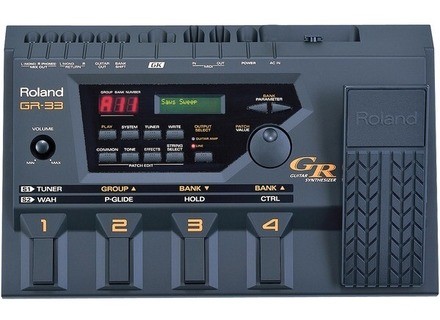 GR-33, Audio/MIDI Converter from Roland in the GR series.

All user reviews for the Roland GR-33

Average Score:3.0( 3/5 based on 3 reviews )
Not satisfied with those reviews?
Our members also liked:

48 notes polyphony, 256 submissions for the patches classified into eight banks (A to H) of which 4 are in ROM, and 4 editable.

After going through the manual for understanding the use of pedals, and switches installed on the GK guitar, usage is pretty simple.
The pedals have two functions: selecting the patches online, or in combination with a button on the GK setting the arpeggiator or harmonizer, etc. ... the volume pedal can also be used for other parameters (FX, Pan, etc ...)

I use a Godin XTSA, so equipped with the original 13-pin GK. Otherwise, the biggest challenge to use a MIDI pedal for guitar is to install the sensor in the guitar.
A short spell jack of the guitar and goes into the sensor.
The 13-pin cable transmits the south AND the sound of the guitar
On the pedalboard his fate on the general mix "+ synth guitar", but ATTENTION the integrated effects of the pedal only applies to synth sounds!
By plugging a jack on "Guitar Out", it retrieves the guitar sound "dry", that plug into a multi-effects pedal, then it reconnects on the "Return" of the pedals.
Here, the guitar sound "Treaty" will be mixed with the sound of the synth on the general mix of pedals.

There is more to review the 256 patches of the pedal

I use it for a year with my guitar GODIN XTSA.
I had not used other pedal-synth, but I had heard a demo of the GR-20 in a store. I still searched for GR-33 Used as it is deemed more editable than the GR-20.
The sound is more akin to the JV series GR-20 which is more oriented XV / Fantom.
I was more interested in the grain, because my utlisation is especially complementary with tablecloths or other sounds plucked double penetrated.
But to play the piano with a guitar (I also play the keyboard), and these sounds are more unique to the GR-20 apparently.
For editing sounds, I use a small program "GRAPELIGHT" through the South, which greatly facilitates the task. This prevents cramps to kneel in equilibrium with the guitar for hours.
(Only thing to do on the pedal, the switch to dump receipt "to access the editing sounds via MIDI)

Regarding the latency, I have not noticed anything special, but I play a Godin which is made for the South, and I think it makes things easier, and more, I'm not a shredder.

The original sounds were not to my taste, mostly. But once reprogrammed, it's great, it brings an extra dimension to the guitar. By noon, with a keyboard, it serves me as an expander for my synths.
This will lead synth sounds, layers, sequences and arpeggios, with percussion, drums, orchestral sounds, ethnic instruments,

Clearly, this choice I will ever be safely

10 of 10 people found this review helpful

Philguitarman's review (This content has been automatically translated from French)

Roland GR-33
2
For all dtails techniques and possibilities, I invite you browse the site of Roland Europe. Everything is there!

The use is very simple. Ms. APRS going through the manual, everything is done to intuitively navigate.
No worries on that cot l.

So this is the section most critical for those who want a possder GR33.

Strengths:
The quality of sound is indniable Roland, as usual. Effects (which are assigned only to the sounds of synthse not the guitar!) Trs are good and the good quality over say anything either. Despite the appearance of plastic pdalier, this is trs solid ... but I do not invite you to drop it because I fear the worst. The arpgiateur and Harmony are good penss patants and trs. The volume is gniale pedals and can control many paramtre ... even a bit because it wants to own a deuxime or three in order to change the sound desired.

Weaknesses:
Latency Latency ... always. The Roland has screwed over the g. ..... e guitarists because even with my GR300, 1982, uptake and mission are the same sounds believe they have nothing done to resolve this issue during these 24 years! ! ... So if you want to play and get no delay, this is not the GR33 that you bring.
The arpgiateur has a big default: the volume. You can not paramtrer the volume of arpgiateur, so that when you snap your sacred surprises Difference volumes.
Speaking of volume, here is a big shit that Roland has not seen. Let me explain:
If you connect the GR33 end loop noon (so as slave noon) you use your guitar volume pedals (other than the pdalier GR33) that such a connection PDAL possde twelve o'clock (which is most of the time), then on channel 07 CC, AUTOMATIC ds you will press the pedals the GR33 will engage even if you middle of the sensor synth position = guitar> The GR33 dclenche the synth and you hear it every time ... is a, it's a hell of a bug shit (I know I said dj ).

I use the GR33 since 2001. Despite the weaknesses deficits above, the GR33 is never crashes and behaves quite well on scne.
But I look forward SYNTHE GUITAR who has more latency. I have doubts about the future because Yamaha does not do anything in this field, as j'espre ROLAND we will release a new product and more powerful gun, but I'm afraid of a new "dobe" or product of a "dead-nquot;.
In any case I will not make that choice.
on the other hand, if readers posssseur friendly and a rack AXON MKII could give me advice and guidance on this type of product, I am the costs. Indeed, I would like to know if this is trs rack synth performance.
Thank you.

6 of 6 people found this review helpful

bessinnox's review (This content has been automatically translated from French)

Roland GR-33
3
DNAS this pedal, there are the standard effects distortion chorus flanger reverb applied on the sounds that they can be grouped by two and form patches.cette pedal is used with the pickup or similaire.J GK2-A uses it to me godin LGXT a sensor built into the chevalet.La thing that poses the most problem is latency which has been improved over time and models (... gi-10, and 30 gr-gr-33). Playing with such a request grance machine precision. you can edit / save patches with a freeware called grapelight s, I haven 't been able to make it work in xp and I have not had the opportunity to test it in another bone.
The connection is simple stereo or mono output to two (one is used to put the headphone on the other to connect a keyboard amp for example, and both sets out a stereo signal)
there is a midi in and midi out that can be used with or controls the output of a signal noon) so we can use it as a "master key" to program a sequence or to control an expander (never tried)

Very easy to use even if the book should we fix it fast and very intuitive.
The manual could not be clearer

The effects of a high quality can extend the possibility of sounds.
the sounds are good but not realistic for some (or strat telecaster to see)
by hammond is great against the

After comparison with the MKII axon, the axon is no picture is far less cheap in terms of sounds, in fact I sold the gr-33

4 months that I, I 've tried this model but it seems Axon has a similar product of better quality, I listened to a test or trying the John McLaughlin and I' ve not seen the difference with the gr-33.Je bought it about 4600 francs 2000 francs less destocking was a work before then there are ways to lower the price

So the difference is obvious between the gr-33 and the axon MKII, I even tried the gr-20 and the axon wins hands down level tracking, the gr-33 loses the ball while the axon keeps the note, making the palm mute the axon runs while the 33 non-gr, he released a note of every 36 months.

4 of 4 people found this review helpful

Did you find this review helpful?yesno
Cookies help us improve performance, enhance user experience and deliver our services. By using our services, you agree to our use of cookies. Find out more.