You have reached the cached page for https://www.amazon.com/Rhythm-Blues-Putumayo-Presents/dp/B0030E5NJG
Below is a snapshot of the Web page as it appeared on 3/26/2021 (the last time our crawler visited it). This is the version of the page that was used for ranking your search results. The page may have changed since we last cached it. To see what might have changed (without the highlights), go to the current page.
You searched for: rhythm and blues cd's We have highlighted matching words that appear in the page below.
Bing is not responsible for the content of this page.
Putumayo Presents - Rhythm & Blues - Amazon.com Music 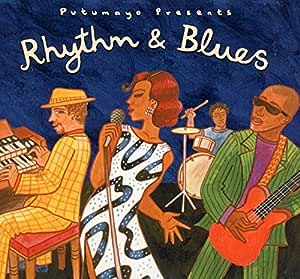 I will ship by EMS or SAL items in stock in Japan. It is approximately 7-14days on delivery date. You wholeheartedly support customers as satisfactory. Thank you for you seeing it.

Putumayo World Music was established in 1993 to introduce people to the music of the world's cultures. The label grew out of Putumayo clothing company, founded by Dan Storper in 1975 and sold in 1997. Co-founder Michael Kraus joined Dan to launch Putumayo World Music and establish a non-traditional sales division. Putumayo World Music has become known primarily for its upbeat and melodic compilations of great international music characterized by the company's motto: "guaranteed to make you feel good!" Putumayo's CD covers feature the distinctive art of Nicola Heindl, whose colorful, folkloric style represents one of Putumayo's goals: to connect the traditional to the contemporary. By combining appealing music and visuals with creative retail marketing, Putumayo has developed a unique brand identity - a rarity in today's artist-based music industry.

4.6 out of 5 stars
4.6 out of 5
16 global ratings
How are ratings calculated?
To calculate the overall star rating and percentage breakdown by star, we don’t use a simple average. Instead, our system considers things like how recent a review is and if the reviewer bought the item on Amazon. It also analyzes reviews to verify trustworthiness.
Top reviews

Amazon Customer
5.0 out of 5 stars I love it!
Reviewed in the United States on December 7, 2015
Verified Purchase
Classic music. I love it!
Read more
Helpful
Report abuse

Nona Kahona
5.0 out of 5 stars Good listening!
Reviewed in the United States on April 1, 2011
Verified Purchase
Have several CDs by this company. I really like their selection of songs and artists whatever the style of music. This is no exception. Always a good listen!
Read more
Helpful
Report abuse

Basil Rathbook
4.0 out of 5 stars Good tunes; good voices
Reviewed in the United States on April 23, 2013
Verified Purchase
A great compilation of blues tunes from a varied group of vocalist styles. This CD is one to listen to often.
Read more
Helpful
Report abuse

ANCG
3.0 out of 5 stars Three Stars
Reviewed in the United States on June 11, 2015
Verified Purchase
Not one of Putumayo's best.
Read more
Helpful
Report abuse

Richard K.
5.0 out of 5 stars Wonderful, love each song performed.
Reviewed in the United States on February 22, 2014
Verified Purchase
Love the variety of singers and the renditions they use for their performances on this album. Upbeat and rocking to say the least, makes you want to dance too!!!
Read more
Helpful
Report abuse

Steve RammTop Contributor: Classical Music
TOP 1000 REVIEWER
4.0 out of 5 stars Reviews of both 2013 and 2010 release. They are DIFFERENT. Why???
Reviewed in the United States on February 9, 2010
There are TWO reviews here because Amazon combines all reviews of a title even if the contents are different. First is my FOUR star review of the 2013 version and then the FIVE STAR one I posted in 2010 for that one.

I love Putumayo CDs and I've reviewed a few dozen titles over the years. But I'm scratching my head over this one. It still great but hear me out.
In 2010 the label released "Putumayo Presents Rhythm & Blues" on CD with 12 interesting tracks. (As far as I know, it's still available, at least on Amazon). They just released what they called a "re-release" and promotes it with "three new tunes". The problem is that they removed FOUR from the 2010 album and these were great tracks. The new one no longer has Irma Thomas, Sam Moore or Ruthie Foster - the first two being R&B legends. They added a guy named Roy C (whose recording has him sounding like he is standing BEHIND the band) and Elmore James Jr. (not the blues legend, but his son). The most interesting addition is Louis Jordan singing his hit "Let The Good Times Roll" late in his career,

Putumayo has released "follow up" albums in the past when a genre becomes popular. I'm sure that the deletions were due to licensing rights. But they could easily have produced a Volume 2 with new songs. As it is, if you own the 2010 album you have little reason to buy this one - and you could just buy the new tracks after sampling them on Amazon.

So, I'm giving the CD four stars because the 2010 album is truly five-stars and 12 tracks and this time some primo tracks are missing (and there are only 11). Still I stand behind most Putumayo releases (even though - sadly -they have stopped contributing a portion of the sales to charities.)

I hope you found this review both informative and helpful.
Steve Ramm
"Anything Phonographic"

This could be one of my Top 5 "Putumayo presents..." CD samplers, ranking up there with the underrated "swing Around The World". There's not a dead moment amount the 13 tracks featured here. Not all the artists are as well known as Sam Moore (here joined in a super session by Keb' Mo' and Angie Stone on Koko Taylor's hit "Wang Dang Doodle") or Irma Thomas (on a 2008 track backed by NOLa pianist Henry Butler), but Putumayo is about discovering lesser-known - but equally talented - artists.

I'm a big fan of Catherine Russell and James Hunter, both of who had one-hit albums so far, and Ruthie Foster's first CD blew me away. But with groups like Cracked Ice and the Quantic Soul Orchestra - the latter fronted, and named, by a mathematician - there are always new discoveries.

All the tracks were recorded and released in the last decade except the 1972 track from the three sisters who form The Emotions. Catherine Russell's track could have been recorded at the same time as The Emotions, but it wasn't. It just recalls that period of R&B.

The liner note (in English, French and Spanish) are more detailed than some of the Putumayo releases (nice touch!) and the last page of the notes provides the source of the tracks so you can hear more of any artist you really like. (heck, I like them all!)

Mr. P.
5.0 out of 5 stars Great listening.
Reviewed in the United Kingdom on March 29, 2016
Verified Purchase
Found these albums on a flight to Asia - great music to listen to!
Read more
Report abuse