You have reached the cached page for https://revengeabc.fandom.com/wiki/Epitaph
Below is a snapshot of the Web page as it appeared on 5/11/2021 (the last time our crawler visited it). This is the version of the page that was used for ranking your search results. The page may have changed since we last cached it. To see what might have changed (without the highlights), go to the current page.
You searched for: revenge epitaph movie We have highlighted matching words that appear in the page below.
Bing is not responsible for the content of this page.
Epitaph | Revenge ABC Wiki | Fandom

Epitaph is the 11th episode of Season 4 and is the 77th episode overall.

EMILY AND VICTORIA UNITE AGAINST A COMMON FOE -- As Emily and Victoria grieve, David springs into action to protect his loved ones.

BANG! BANG! BANG! Victoria and David hear the gunshots that rang out in “Atonement.” They rush over to Grayson Manor. Victoria sees Daniel’s bloody body on the floor. She’s devastated. David knows that Malcolm Black will kill them all once he finds out his daughter is dead. Jack suggests that they make sure this very bad man doesn’t ever get this very bad news. A plan is set in motion. An elaborate lie is told where Emily claims she killed Daniel in self-defense.

While hacking his way into showing that dead Agent Kate is actually vacationing in Miami, Nolan uncovers the FAA locator numbers for every one of Malcolm Black’s private planes. He’s off to finish cleanup on the crime when a distraught Louise pops by. She asks to stay at his place for a while.

Victoria is furious with David for the lies he’s helping to perpetrate about her son. She can’t be around him. David’s solution to this is having her stay with Emily. He orders the two of them to play nice while he disposes of a body. When a distraught and suspicious Margaux arrives, Victoria says she believes Emily acted in self-defense.

Jack struggles with the fact that he shot and killed a women he’d been intimate with not so long ago. Nolan snaps him out of it so they can clean out Kate’s hotel room. He finds an envelope amongst her things. Later, Louise is asked by Victoria to do a little snooping at Nolan’s place. She finds the envelope that was taken from the hotel room.

Emily ignores Jack’s advice to avoid police questioning after such a traumatic event. Ben says that Daniel wasn’t drunk. He also reveals that he was going to be a father. Emily is able to spin the interrogation to her advantage with a reasonable explanation as to why Daniel had no defensive wounds. She killed him only when she had no choice. Chief Alvarez pulls over David. He orders him to open the back doors to his van.

There’s nothing inside. Much like his daughter, it seems David Clarke always has a plan. He tipped off some of Malcolm Black’s enemies that he’d be in Miami. In other news, Ben realizes Jack is off his game lately because of Kate. He thinks she really did a number on him.

Margaux vows to make it her life’s mission to make Emily pay for Daniel’s death. She bans her from attending the funeral with the blessing of Victoria, who enjoys a memory of her son before the ceremony. As for Emily, she learns that her father was planning on killing Victoria. She also has flashbacks of Daniel as she watches the funeral service from afar.

As Victoria says her final goodbye to her son, she asks Louise to destroy the envelope she swiped. It’s her way of avoiding any future funerals. That sentiment may not be fulfilled so easily. Nolan lets David know there’s been a bloodbath in Miami. An unidentified arms dealer has turned up dead and in pieces.

Ted Powell of the FBI rolls into town trying to track down Kate. He asks Chief Alvarez if she was working with anyone on his team. Jack’s name is divulged. Alvarez is ready to give his rookie a call until it’s revealed that this guy isn’t really with the FBI. The mystery man pulls out a knife. He stabs Chief Alvarez as he reveals his true identity of Malcolm Black.

Emily: Margaux, I'm so sorry about Daniel. I can't imagine what you're going through. Please, come, sit.
Margaux: No, I won't be here that long. My attorney just spoke with the police. Apparently they will not be naming you as a suspect in Daniel's murder. Did you know? Self-defense. They're going to make that official.
Emily: Margaux...
Margaux: No you need to listen. I know you're lying. You played a game with the police, with Victoria, with who knows how many others, but believe me when I tell you, I do not play. I know you murdered Daniel.
Emily: I did not. And I'm just as devastated-
Margaux: STOP TALKING AND HEAR ME! I'm going to make it my life's journey to see you pay for what you've done, and that journey begins now! We bury Daniel on Friday. You will not be there.
Emily: You can't do that Margaux.
Margaux: No, but she can.
Victoria: (nods)
Emily: I see.

Emily: You know that Daniel would have wanted me on his funeral.
Victoria: Maybe, but we will never know, will we? 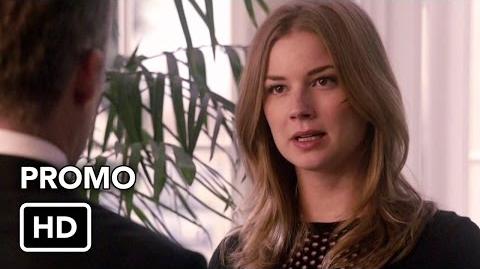 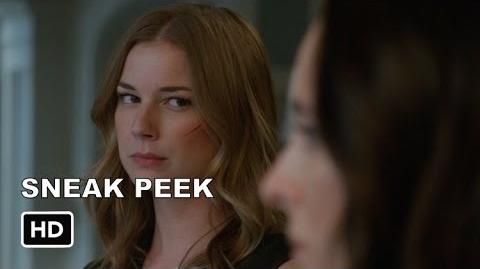 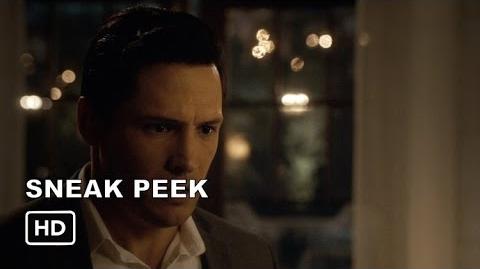 Retrieved from "https://revengeabc.fandom.com/wiki/Epitaph?oldid=45749"
Community content is available under CC-BY-SA unless otherwise noted.