You have reached the cached page for https://www.westeros.org/News/Tag/House+of+the+Dragon/
Below is a snapshot of the Web page as it appeared on 11/7/2021 (the last time our crawler visited it). This is the version of the page that was used for ranking your search results. The page may have changed since we last cached it. To see what might have changed (without the highlights), go to the current page.
You searched for: ramin djawadi wikipedia wiki film 2018 english We have highlighted matching words that appear in the page below.
Bing is not responsible for the content of this page.
Westeros: News - House of the Dragon

The 'A Song of Ice and Fire' Domain

The newly released teaser has enough interesting images in it of characters, scenes, and costumes and props that we thought we should comment on a selection of them. Images, and our thoughts, follow! 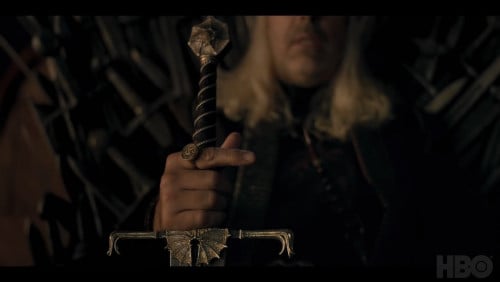 HBO Max has given fans a pleasant surprise with a first look at House of the Dragon, in the form of a Matt Smith-narrated teaser showing a number of scenes and characters from the show, as well as confirming several significant new cast members. See the video below, and the press release about new cast following that.

Blackfyre looks great, we have to say. So, too, does Daemon Targaryen’s tournament armor with the dragon wings on the helm (an idea we used on our game, Blood of Dragons, for Aemon the Dragonknight, grandson of Prince Daemon). And, perhaps the biggest surprise at all, a revised vision of the Iron Throne and its dais to try and bring it more in line with George R.R. Martin’s actual vision of as a monstrous, twisted construction. There’s even a tourney scene featuring Criston Cole (distinguishable by his coat of arms, ten black pellets on red, on his shield) and a knight of House Tarly (possibly the future Lord Alan Tarly, who sides with the blacks?), though the array of banners there are rather curious: Lannister and what looks like Lefford, perhaps Corbray… but also Bolton, Stark, and what might be a take on Manderly (the latter at a southron tourney seems okay to us… but the Boltons and Starks would be incredibly unlikely to appear at a tourney in what appears to be the Reach.)

We plan to screen cap and go in more detail at some of the images and scenes later this evening, for those curious.

HBO has confirmed a number of previously-unannounced cast members, confirming at least one casting that was already figured out by fans (the popular Graham McTavish of Outlander, The Hobbit, and Men in Kilts) and a number of other significant characters who play pivotal roles in the events covered by House of the Dragon, which is based on George R.R. Martin’s Fire and Blood. 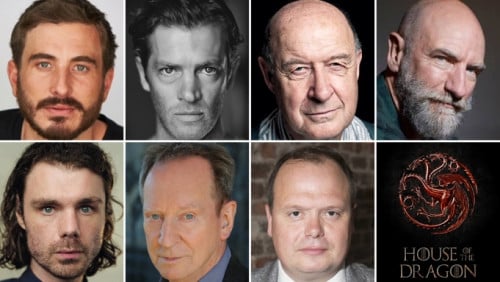 Ryan Condal’s and David Mandel’s The Stuff Dreams Are Made Of podcast about movie and television prop collecting has returned after a mid-season hiatus, and it starts with a bang as Condal recruits none other than George R. R. Martin to discuss his own history as a collector, as well as just a wee bit of discussion of House of the Dragons at the end. Fans should find this one pretty interesting, in particular George’s feelings regarding the ideal adapters of his work going forward.

Discussion of Game of Thrones and House of the Dragon related matter begins around the 1 hour, 18 minute mark.

Creation Entertainment and Warner Bros. Themed Entertainment have announced an official Game of Thrones fan convention to be held in Las Vegas, Nevada at the Rio Hotel & Suites Convention Center on February 18-20, 2022. This is the first ever official convention for the show, and promises to have many guests, panels, and events, as well as merchandise for sale.

Last month, we shared that Ryan J. Condal’s and David H. Mandel’s podcast focused on film and television props, The Stuff Dreams Are Made Of, would have an episode featuring a head of department from House of the Dragon. That episode has now aired, and reveals (among other things) that the show’s master armourer and head of the armoury department (which provides all the weapons for the show) is Tim Lewis, a leading armourer in the film industry with credits such as The Outlaw King, The Old Guard, and Ridley Scott’s upcoming The Last Duel.

Lewis’s website includes an extensive gallery of some of his work across a number of films. In the course of the podcast, Condal and Lewis of course discussed a bit of what’s going on on House of the Dragon. More details below:

Swords made for The Outlaw King and Macbeth, designed by Tim Lewis.

HBO has confirmed two new names of actresses cast in the in-production House of the Dragon, and these are particularly interesting as they reveal that flashbacks will be used to convey part of the background to the events of the Dance of the Dragons. Per Hollywood Reporter, Milly Alcock and Emily Carey are part of the cast of the production. Alcock will be playing a young Rhaenyra Targaryen while Carey will play a young Alicent Hightower.

Milly Alcock, hailing from Australia, has appeared in a number of Australian television dramas and mini-series. Emily Carey, from the UK, has also done some television work, but has also been seen in film—notably, playing the young Diana of Themyscira in the first Wonder Woman and the young Lara Croft in the Tomb Raider reboot starring Alicia Vikander.

Posted at 18:03 CET by Elio
Comments: | PermaLink
June 29, 2021
House of the Dragon Filming in Spain and Portugal in October

Things have been quiet on the House of the Dragon front since their filming in Cornwall led to fans getting their first glimpses of some of the lead actors in costume. Now, thanks to Spanish newspaper Hoy, we learn (thanks to our friends at Los Siete Reinos) that House of the Dragon is set to film for three weeks in October in the Extremaduran city of Cáceres and the town of Trujillo. Both of these were used during filming of Game of Thrones, with the town of Trujillo providing the walls of King’s Landing and Cáceres as the location for a procession scene in King’s Landing featuring Euron Greyjoy as well as scenes set in Oldtown.

Per Los Siete Reinos, the three weeks would include pre-production time, so actual filming there will be shorter.

Update June 30th: A second article from Hoy concerning the filming in Cáceres also reveals that the show will be filming in the Portuguese village of Monsanto.

The second season of Ryan J. Condal’s and David H. Mandel’s podcast about movie props, The Stuff Dreams Are Made Of, has launched. This first episode is ostensibly about the 40th anniversary of Raiders of the Lost Ark and the bullwhip famously wielded by Indiana Jones, but in the course of it some hints about House of the Dragons were provided by Condal.

The first piece of information concerned plans for future episodes, with Condal stating that he’ll be getting one of the members of the HotD production to be a guest to discuss what he or she does. He did promise it would be spoiler-free, because otherwise he’d be fired, but we can expect some interesting discussion in the weeks to come.

The second piece of information was that Condal confirmed there would be “bespoke” swords for “heroes”—that is, custom-made swords for leads and significant characters—but that the armorer that has been hired for the show has a vast supply of swords from past productions he has worked on that will be among those used for background performers and the like. In fact, according to Condal, the supply of past weaponry or armor that an armorer or swordsmith can bring to a production is part of the calculation when deciding who to hire.

So, whoever is responsible for the swords on House of the Dragon is someone with a great deal of experience making swords for film and television productions. We would guess that they are also UK based, as it would just be very convenient. Interestingly, Condal mentioned Terry English (Excalibur, Aliens) several times in the course of the podcast, but a look at his credits suggest he may be retired from the gruelling production schedule.

Posted at 20:16 CET by Elio
Comments: | PermaLink
May 05, 2021
HBO Releases First Costumed Photos from House of the Dragon

After a deal of footage has made its way to the internet from photographers with long lenses, HBO has now released to media images of some of the costumed lead performers from House of the Dragon. These feature Emma D’Arcy and Matt Smith as Rhaenyra Targaryen and Daemon Targaryen, Steve Touissant as Corlys Velaryon, and Olivia Cooke and Rhys Ifans as Alicent Hightower and her father Otto Hightower. See the images below, with some comments.

Emma D’Arcy as Princess Rhaenyra Targaryen” and Matt Smith as Prince Daemon Targaryen. Typical Targaryen looks, as expected. Rhaenyra’s costuming fits the description of her preferred colors and textiles such as maroon and velvets. Her long braid is also drawn from Martin’s description.

read on >>
Posted at 17:27 CET by Elio
Comments: | PermaLink
April 26, 2021
HBO Announces Production Begins on House of the Dragon

After a number of flame emojis were tweeted by the official Game of Thrones Twitter account, with the number growing every 15 minutes, the burst of flames culminated in the exciting announcement that production of House of the Dragon has commenced in a tweet with an intriguing picture of a distanced production team (including, if I’m not mistaken, showrunners Miguel Sapochnik and Ryan J. Condal):

Fire will reign
The @HBO original series #HouseoftheDragon is officially in production. Coming soon to @HBOMax in 2022. pic.twitter.com/tPX8n2IvGW

Although we’re not generally planning to track details of filming of HBO’s House of the Dragon, a recent report from Cornwall Live caught our attention for a couple of reasons. One, we did not know that the famous Mont-Saint-Michel has a Cornish cousin in St. Michael’s Mount (apparently in close vicinity to Penzance harbor, of The Pirates of Penzance fame!) Secondly, and more to the point, one of the photos revealed what appears to be the show’s version of the heraldic arms of House Velaryon… and they don’t fit what George R. R. Martin confirmed to us over 20 years ago.

This mail, from our first year of correspondence with GRRM, refers to the fact that he had been visiting Westeros.org to look at the heraldry we had been producing from the books and then from his own notes. Though my original mail to him is lost, from context I think I must have remarked that we took a guess that he meant an actual seahorse and not the mythical or sea-horse (confusingly, both are also known as hippocampus).

GRRM has finally gotten his wish to break some news regarding House of the Dragon, revealing that British actor Fabien Frankel has been cast in the role of Criston Cole, a knight who will remembered (and reviled) in later days as the Kingmaker. A classically-trained actor who attended RADA and LAMBDA, he is a relative newcomer with his first credits in 2019 (the Emilia Clarke romcom Last Christmas, no less!) Most recently he has appeared in The Serpent, a BBC-Netflix co-production.

HBO has announced a number of additional castings for House of the Dragon, which is set to begin filming this April. Deadline has a good report with details based on HBO’s official press release, but we’ll summarize here:

Via our friends at Los Siete Reinos, we’ve learned that an on-line resume, posted by his representatives at the Gorfaine/Schwartz Agency, shows that award-winning Game of Thrones and Westworld composer Ramin Djawadi is returning to Westeros to compose the soundtrack of the forthcoming House of the Dragon. 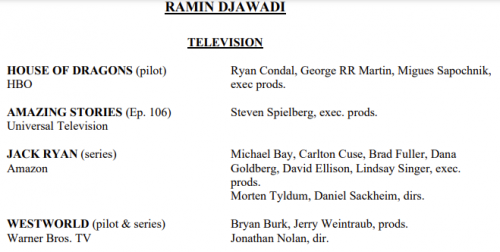