You have reached the cached page for https://franoi.com/profiles/ww-ii-freedom-fighter-pino-lella/
Below is a snapshot of the Web page as it appeared on 4/18/2021 (the last time our crawler visited it). This is the version of the page that was used for ranking your search results. The page may have changed since we last cached it. To see what might have changed (without the highlights), go to the current page.
You searched for: pino lella wikipedia english We have highlighted matching words that appear in the page below.
Bing is not responsible for the content of this page.
WW II freedom fighter Pino Lella – Fra Noi 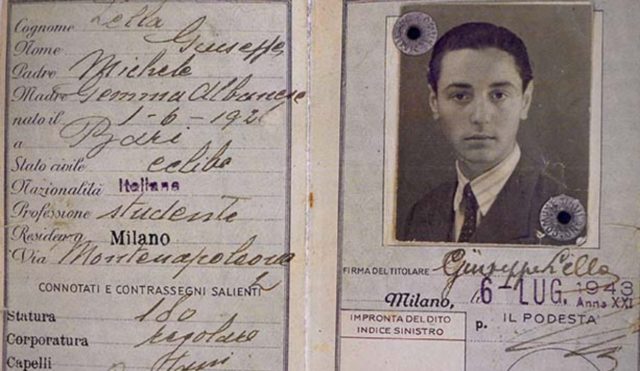 A spy for the Allies and a participant in the underground railroad that protected Italy’s Jews during World War II, Giuseppe Lella considered himself a coward until an American author persuaded him to share his story with the world.

The war came to Giuseppe “Pino” Lella right as he watched Fred Astaire dance with Ginger Rogers. It was the summer of 1943 and Lella, then 17 years old, was sitting next his brother, Mimmo, at a movie theater in his native Milan watching the cinematic duo twirl across the screen. For a brief moment, the war that had engulfed Europe and Nazi-occupied Italy was extinguished by pure Hollywood escapism.

Then reality came crashing down. First the projector eerily froze on the smiling faces of Rogers and Astaire. Moments later, an air raid siren echoed just outside and the crackle of anti-aircraft guns sent panicked moviegoers screaming from their seats into the chaos outside. Lella and his brother surged toward the exits right as Allied bombers dropped their deadly payload at the rear of the theater, tearing through the back wall and the once magical big screen, hurling pieces of debris toward the escaping throng, striking Lella on his cheek and drawing blood.

“We were lucky enough to be among the first to make it out into the open,” says Lella, now 91 years old and living once again in Milan. “Some people were killed.”

The Lella boys began the walk home through a city with no electricity — its only illumination was the fires burning from the attack. Pino and his brother made it safely back to their mother and father, but this wouldn’t be the first time Pino Lella narrowly averted death. Over the next two years he would put his life on the line numerous times to help others and define what it means to be a hero. 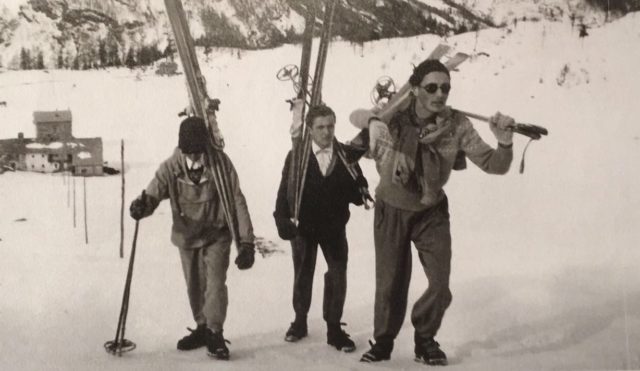 As the war in his home country intensified, Lella became part of an underground railroad helping to move Jews out of Italy through the Swiss Alps, and later served as a spy for the Allies while driving for German General Hans Leyers. He sat on this amazing story for decades until writer Mark Sullivan sought him out after hearing about this exploits at a party in 2006. Sullivan flew to Milan for a marathon interview session with Lella, who claimed his actions were unremarkable.

But Sullivan persisted, conducting lengthy interviews with Lella and touring many of the landmarks of his life in Milan and the surrounding areas. After a decade of research and writing, Sullivan released “Beneath a Scarlet Sky,” a lightly fictionalized version of Lella’s story, in May 2017. Trained as a journalist, Sullivan intended to write the book as a piece of reported nonfiction, but tracking down every one of the corroborating pieces proved elusive.

“So many other characters had died before I heard about Pino Lella, and the Nazis had burned so many documents surrounding his story that even after 10 years of research I had to make informed assumptions in the narrative,” Sullivan says on his website. “Once I surrendered to that, I knew I was in the realm of historical fiction. I gave in to it and adjusted by switching obligations.” 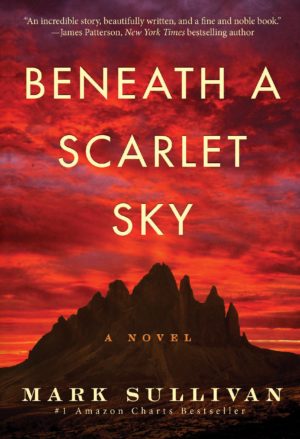 In the end, Lella estimates that “Beneath a Scarlet Sky” is “80 to 90 percent true,” and says he is thrilled with the book and its launch, which started out small and has slowly gathered steam, selling hundreds of thousands of copies in multiple languages. Perhaps most impressive, it was recently optioned by Hollywood for feature-film treatment. Current “Spider-Man” star Tom Holland has been tapped to play young Lella, and famed mogul Amy Pascal (“The Post”) is producing.

Lella’s life is certainly the stuff of thrilling cinema. Born in 1926, he was raised in Milan by parents who designed, manufactured and sold leather goods. He was the oldest of three siblings, including Mimmo and his sister, Francesca, both now deceased. In his youth, he spent three months every year up in the Alps near Lake Como at Casa Alpina, mountain-climbing when the weather was warm and skiing when the snow began falling.

“I was always in the mountains,” says Lella, who developed into an exceptional skier. “That’s where many of the people went out of the city to be in peace.”

And while Casa Alpina served as the backdrop to many carefree days in his youth, it also became a refuge for Lella and his brother, who were sent there by their parents for safety during the war. But when the Nazis began rounding up Italian Jews for extermination, the boys stepped into the fray, regularly taking groups as large as eight through the treacherous mountain terrain and past German checkpoints to get them to safety in Switzerland.

“We were lucky enough to have a place where we could take them away,” Lella says.

Eventually, Lella returned home, but the German army began conscripting Italian youth to send them to the Russian front as forced laborers. His parents, fearful for their son’s life, strongly urged him to enlist in the Army to avoid being sent into what amounted to slavery. Lella hated the Nazis with a fury, but reluctantly agreed, so in 1944 he joined the German army. His facility with languages — including French, English, some German and his native Italian — caught the attention of General Leyers, who was Hitler’s right-hand man in Italy, and soon Lella found himself as the Reich general’s personal driver.

Members of Lella’s family were involved in the anti-German partisan movement surging through Italy at the time, so Lella quickly used his new position to be the eyes and ears of the resistance, gathering up valuable intel that could be passed on to the Allies. During that time, Lella put his personal safety on the line more than two dozen times to save the lives of others.

To say any more about Lella’s life story as chronicled in this fascinating novel would be a spoiler of the highest order. Suffice it to say, throughout “Beneath a Scarlet Sky,” Lella’s story proves to be a riveting page-turner that shines a light on a young man who became an unsung hero of World War II by performing truly extraordinary and selfless feats without ever acknowledging them. 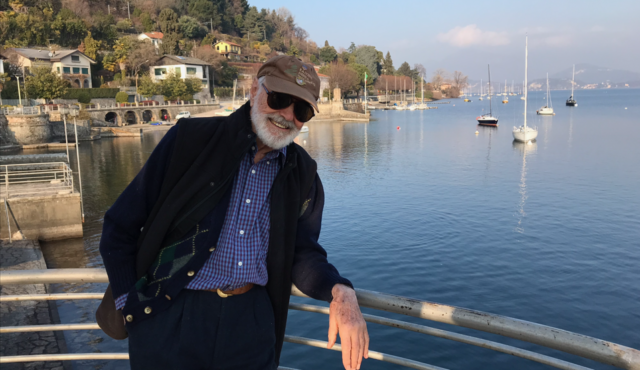 “I was afraid, but I also was very lucky,” says Lella, who only whispered his story to a handful of people before Mark Sullivan came knocking. “Life for me started when the war finally ended in 1945.”

Sullivan wrote that Lella once described himself as more of a coward than a hero during one of their earliest meetings, but Lella says this massive retelling of his life story has given him some perspective on his fateful actions more than 70 years ago.

“If you would’ve asked me then I would have certainly been without a good answer as to why I did what I did,” Lella says. “The history should be known, but it’s not for me to say that I’m brave. I’m not brave. I was there and I was lucky to do what I could.”

The above appeared in the April issue of the print version of Fra Noi. Our gorgeous, monthly magazine contains a veritable feast of news and views, profiles and features, entertainment and culture. To subscribe, click here.

Jim Distasio is an award-winning writer, director, editor. His documentary “Sawdust: Life in the Ring,” about the Zoppè Family Circus, was an official selection at the Hot Springs Documentary Film Festival and the River’s Edge Film Festival. His documentary “5,000 Miles From Home,” about the impact of World War II on Chicago’s Italian-American community, earned two local Emmys on six nominations. Distasio earned a master’s degree from the Medill School of Journalism at Northwestern University, where he currently serves as an adjunct lecturer. His writings have appeared in numerous publications, including Chicago Tribune Magazine, American Profile, Vine Line and Fra Noi. 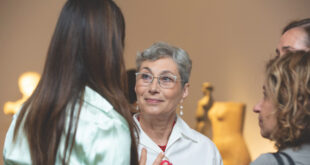 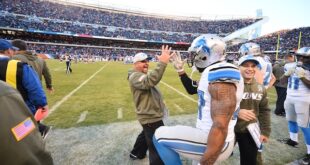 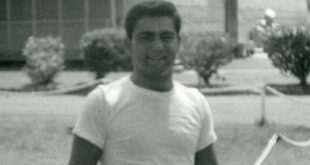 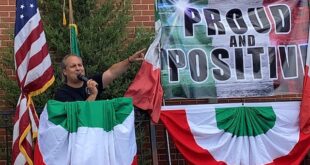 Crediting the JCCIA with setting him on his life’s path, Ron Onesti is looking to … Join Our Email List
For Email Marketing you can trust.

Subscribe to our print magazine
or give it as a gift.